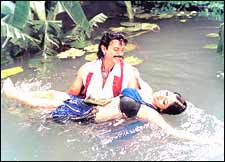 EDITOR RATING
5.0
Performances
Script
Music/Soundtrack
Visuals
NA
NA
NA
NA
Suggestions
Can watch again
NA
Good for kids
NA
Good for dates
NA
Wait to rent it
NA
Is it just us, or is it that most of our moviemakers simply lack proper thinkers studding their teams? We mean, this is a Venkatesh film by K Raghavendra Rao and Aswani Dutt, which means there's no shortage of experience or money. And in that, you have some bilge so unadulterated, it ruins the premise and takes it to the cleaners.

For example, Venkatesh and his friends stiff speakers from a mosque, a temple and a public rally, and have irate mobs chasing and cornering them. Then Venkatesh gives them a 100% corny lecture about how public speakers disturb children at study, making all the mobsters collectively drop their clubs. We'd like to see a 25-year-old try this in real life. A C Guards is a good place. A brilliant solution to a complex situation is one that anybody can pull off, and something that requires no luck or special skills (except being able to think on one's feet). This is chickening out.

There's plenty more flume. Venkatesh drives 600km on a 100cc bike from Hyderabad to somewhere near Vizag for no tearing reason, when the alternate option is the Godavari Express that averages 80kmph on a 100% traffic-free track and keeps your backside functional at the end of it. Then, he hits on the head, a British soldier wearing an army-designed helmet, and the latter starts bleeding.

More: ill-timed duets with a raunchily-dressed Shriya when people are geared to watch a passion-filled freedom struggle; completely inane and intolerable comedy in that period-film part with Brahmanandam, Kota and Babu Mohan (especially the inaugural scene involving them); random and inconsistent reactions to local intolerance by Gulshan Grover, the British officer in charge who can't decide between being funny and being cruel; and a lot more.

The film deals with an unemployed man who gets a job as a TV reporter after, yes, he's seen lecturing a mob, and then recalls a previous lifetime when he was Subhash Chandra Bose, a fierce freedom fighter who is betrayed and ultimately killed by Venkata Ratnam (Prakash Raj), who has now become a big leader and is all set to become PM. The reborn Bose now has to stop him, with the help of his colleagues in the channel.

An error like Bose being 23 years old in his current birth, when he died in 1946 and this is 2005, is perhaps unavoidable given the premise of the script. But when you see him whispering "Orey Bandoda!" in Prakash Raj's ear and then disappearing in a split second before the latter can look, you slap your forehead.

That whole mind-game thing in the end on Prakash Raj is so completely not up to snuff, as isn't Prakash Raj's detailed confession - like he wants to leave no loophole when they show it on TV. It's just pandering to an audience that somehow wants to see the hero win, and putting thought and good film-making aside.

The strength of the film is Venkatesh. There's simply nothing else. Shriya and Genelia are pretty, and the comedy mostly sucks, except in rare parts like in the interaction between Prakash Raj and his son when they're drinking towards the end - but when you are putting in so much comedy, some part has to statistically turn out good.

The music is plain average. The period part doesn't pack well at all because it rouses very little passion in you, thanks to poor scripting, the dousing of this part in songs whenever things are just heating up, the comic portrayal of Gulshan Grover, and the length (2 hours). Commercial elements are all okay, but the film should do justice to an unorthodox subject if it takes up one. And the film should be good.
Share. Save. Connect.
Tweet
SUBHASH CHANDRA BOSE SNAPSHOT

See Subhash Chandra Bose full details
SUBHASH CHANDRA BOSE USER REVIEWS
1 - 4 OF 4 COMMENTS
POSITIVE  |  NEGATIVE |  NEWEST  |  OLDEST  |  MOST HELPFUL  |  LEAST HELPFUL
USER RATING
4.9
56 USERS
Performances
Script
Music/Soundtrack
Visuals
NA
NA
NA
NA
Can watch again - NA
Good for kids - NA
Good for dates - NA
Wait to rent it - NA
Rajesh Narasimhan on 28th Apr 2005, 5:11pm | Permalink
i wonder how the review missed out on the fact that the movie is a one night result of an overdose of dvds... in between the cinematic brilliance of raghave.... one gets to see scenes from the passion of the christ, lagaan, asoka and many other films... dude, didn't it hit you on the head while you were reviewing it! guess you were too numbstruck by then!

cheers to worst film industry in the world

there are some bad tales

but this crap is a head and tail less tale dudes......


RATING
2
GoodMovieGoer on 25th Apr 2005, 1:46pm | Permalink
I strictly people like raghavendra rao who have lost their common sense in course of time should better make meaningless tv serials than venture into such films and spoil our mind,money.

ADVERTISEMENT
This page was tagged for
venkatesh in subhash chandra bose film full pic
subhash chandra bose telugu movie review
subhash chandra bose movie review telugu
Subhash Chandra Bose telugu movie
Subhash Chandra Bose reviews
Follow @fullhyderabad
Follow fullhyd.com on
About Hyderabad
The Hyderabad Community
Improve fullhyd.com
More
Our Other Local Guides
Our other sites
© Copyright 1999-2009 LRR Technologies (Hyderabad), Pvt Ltd. All rights reserved. fullhyd, fullhyderabad, Welcome To The Neighbourhood are trademarks of LRR Technologies (Hyderabad) Pvt Ltd. The textual, graphic, audio and audiovisual material in this site is protected by copyright law. You may not copy, distribute, or use this material except as necessary for your personal, non-commercial use. Any trademarks are the properties of their respective owners. More on Hyderabad, India. Jobs in Hyderabad.