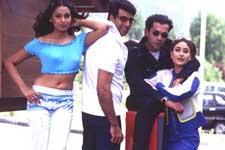 KS / fullhyd.com
EDITOR RATING
5.0
Performances
Script
Music/Soundtrack
Visuals
NA
NA
NA
NA
Suggestions
Can watch again
NA
Good for kids
NA
Good for dates
NA
Wait for OTT
NA
"Never trust strangers" is perhaps not too much beside the point, but "never trust promos" would've been bingo. Those of this one scream that it's a suspense thriller, but the only suspense is about when the suspense is going to come - and whatever there is is hardly thrilling. The result is that the bated breath element for its makers in waiting for the result of Ajnabee must be over must faster than hoped for.

Raj Malhotra (Bobby Deol) is a polo player who gets selected to coach a team in Switzerland (you can almost hear the director's whoops of joy at finding an excuse to get there). Just before leaving, he coincidentally meets Priya (Kareena Kapoor), and one date and one song later they are husband and wife (is this a Freudian blurt-out of the time spent in writing the script?).

So our polo coach (who hardly ever appears doing his job) and wife land up in a bungalow surrounded by Indian neighbors (Johnny Lever) who talk in acronyms and explain the meaning immediately (and there really should have been a laughtrack). A few songs and some stale comedy scenes later, the couple gets introduced to its new neighbors, Vikram and Sonia (Akshay and Bipasha respectively). A friendship is struck, and the foursome has lots of fun at different locations.

During the course of this merry, Bipasha appears to develop an attraction for Bobby and Akshay similarly for Kareena, and Akshay proposes wife swapping for a night to Bobby. And in a bow to the great Indian culture, he gets beaten up for that.

The sequence of fun, songs, dances and fights continues until interval, though, and you are still wondering when the edge-of-the-seat part is going to come. Well, Akshay is set on his goal and won't stop, and finally one day when both he and Bobby are drunk, finally manages the swap. And the morning after Bipasha is killed. There.

What follows is an hour of whodunit in which the suspense gets killed as soon as it is created. The last half hour of the movie does have some twists and turns to tickle your mind, but it is not enough to justify the effort of your being there.

The theme is definitely unorthodox, but things don't stop there, do they? It would have been interesting indeed to know how Indian audiences would react to such a line, but this one is going to be rejected for the wrong reason - bad filmmaking. And that is the big pity.

What you have at the end is a flick that is more visually appealing than mind tickling. The entire movie is shot in picturesque locales, and the camerawork complements them perfectly to produce a feast for your eyes. For eyes looking for a feast of a different kind, there are some bold scenes and a hot song between Akshay and Kareena.

The actors do justice to their jobs (though Akshay looks a bit out of focus). Anu Malik's music has an aura of freshness. But the surprise package is the dusky doe-eyed beauty, Bipasha Basu. She looks gorgeous, and has immense screen presence.

A time pass flick, but check out the other options you have.
Share. Save. Connect.
Tweet
AJNABEE SNAPSHOT

ADVERTISEMENT
This page was tagged for
old hindi movie ajnabi
Ajnabee hindi movie
Ajnabee reviews
release date
Akshay Kumar, Bobby Deol
Follow @fullhyderabad
Follow fullhyd.com on
About Hyderabad
The Hyderabad Community
Improve fullhyd.com
More
Our Other Local Guides
Our other sites
© Copyright 1999-2009 LRR Technologies (Hyderabad), Pvt Ltd. All rights reserved. fullhyd, fullhyderabad, Welcome To The Neighbourhood are trademarks of LRR Technologies (Hyderabad) Pvt Ltd. The textual, graphic, audio and audiovisual material in this site is protected by copyright law. You may not copy, distribute, or use this material except as necessary for your personal, non-commercial use. Any trademarks are the properties of their respective owners. More on Hyderabad, India. Jobs in Hyderabad.