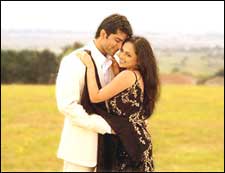 Charisma Murari / fullhyd.com
EDITOR RATING
1.0
Performances
Script
Music/Soundtrack
Visuals
NA
NA
NA
NA
Suggestions
Can watch again
NA
Good for kids
NA
Good for dates
NA
Wait to rent it
NA
This is not the kinda stuff that dreams are made of. It's not even the kinda stuff that movies are made of. But that's another matter. When Mahek (Richa Pallod) comes to stay with Sunny's (Rakesh Bapat) family in England, you already know where this one is going. Down the toilet. Anyhoo, Sunny's part of this khandaan that comes complete with Chacha, Chachi, Ma, Behen, Tau, Pitaji, and, to round off, a Dadimaa.

Sunny is an aspiring script writer/actor, and that, he believes, gives him the license to stretch his facial muscles so hard that tiny dimples are formed, and to curl up his nose, in a desperate bid to look pretty.

Mahek, for her part, goes around looking like everyone's mum. She entices the Maa and the Bhabhi to keep the karwa chauth vrat, hence allowing for an excuse to burst into song, she makes the Behen see that her gora toy-boy's up to no good, thus allowing for the mandatory lecture on bharatiya sabhyata, and she gets the alcoholic Uncle off the sauce, thereby adding five more minutes of roll to the flick.

Confessions of love are made, and the gods are invoked. Melodrama happens and Dadimaa passes on. More melodrama happens and skeletons come tumbling out of the closet. Mahek is not the good doctor's niece. Gasp! She is an orphan who is only days away from death. Gasp! Now what happens? Will she live? Will the movie end if she doesn't? By now, you are past caring. The movie has sapped everything outta you, and you are uncomfortably numb, just waiting for the pain to end.

All said and done, this is the kinda movie that brings a smile to your face. Especially, when it ends. In all fairness, though, Richa Pallod seems to have done a decent job under the absolute banality of the script. Rakesh Bapat seemed quite uninspired, and Kader Khan (as Sunny's father) was just going through the motions.

ADVERTISEMENT
This page was tagged for
kaun hai jo sapno mein aaya 2 movie
kaun hai jo sapno mein aaya full hd movie
Kon,ha,jo,sapnoma,aya,3d,movie,dowlod,
Kaun Hai Jo Sapno Mein Aaya
who is the choreographer of movie kaun hai jo sapno mmein aaya
Follow @fullhyderabad
Follow fullhyd.com on
About Hyderabad
The Hyderabad Community
Improve fullhyd.com
More
Our Other Local Guides
Our other sites
© Copyright 1999-2009 LRR Technologies (Hyderabad), Pvt Ltd. All rights reserved. fullhyd, fullhyderabad, Welcome To The Neighbourhood are trademarks of LRR Technologies (Hyderabad) Pvt Ltd. The textual, graphic, audio and audiovisual material in this site is protected by copyright law. You may not copy, distribute, or use this material except as necessary for your personal, non-commercial use. Any trademarks are the properties of their respective owners. More on Hyderabad, India. Jobs in Hyderabad.