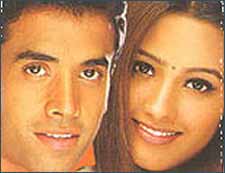 The good ol' instant masala-mix reaffirms our faith in everything we believe Indian cinema to be. Teja thought he had found himself a place in history by inventing an action that stands for people in love. Here's news, Mr. Teja: weaving fingers together isn't one's idea of 'everlasting' love.

As far as the story goes, it just can't get more predictable. Vasundara (Natasha) and Ravi (Tusshar) study in the same college. She's poor, he's rich. Her father is a milkman, his is a billionaire. He's dumb, she's smart.

The love-him love-him-not syndrome culminates in hand weaving and primitive bush dancing... He belongs to a gang of good-for-nothings who play basketball all day and can't study for nuts. However, finding that he has great 'concentration' (he can shoot a basket), she feels he will do great in his studies. She agrees to tutor him.

Obviously, their parents hate their newfound relationship and will do anything to stop them. "But we are only friends!" And promptly a song: "We are in love" (Yawn - really?)

Now the milkman sends doodhwallah goons to bash Ravi up and the billionaire sends greasy-palmed cops to bash up the milkman. The rich father is a drunk womanizer who can't see beyond money. Milkman father is a proud goon with a stout sister who is a crude, strong, heartless bitch (didn't she just have to be there?). Together, they make life hell for their kids and for the audience by using fiery eyes and caveman tools (axe, sickle, mace...) as the only means to tell the story.

Ravi announces that he is going to marry Vasundara (Vasu) at his engagement party organized by his father when Vasu's goony father arrives with his gundas (the remains of the Telugu version). At a negotiation, it is decided that if the two can stay without seeing each other for a year, they can be married (borrowing from the mega hit 'Ek Duje Ke Liye').

Ravi is held hostage in Mumbai where he discovers that he is a short-armed engineer who can assemble a phone. Vasundara is likewise hauled off to her uncle's house. After wading through an hour of hallucinations, blood fights with hired hitmen, constant switching between trains from Mumbai to Hyderabad and back to Mumbai, the two finally meet. And unfortunately, it still doesn't end here. 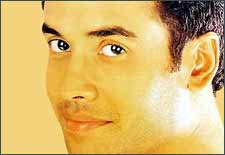 As far as acting goes, there is none. Ekta Kapoor's baby brother needs a macho makeover with less whimpering. He also seems to be highly asthmatic. I don't blame Teja for casting Natasha since she seems to posses some talent - she can flare her nostrils, cry at the drop of a pin and run behind bushes. Oh, and her vocabulary is unusually large - it incorporates words like "concentrate" and phrases like "I love you".

A few cultural gaps like the milkman's daughter wearing pedal pushers and tight tops at home but ghagras to school are minor mix-ups as compared to an entire army in blue uniforms armed with cane shields arriving to stop a wedding! (In case you forgot - the men in blue lost!)

ADVERTISEMENT
This page was tagged for
Yeh Dil hindi movie
Yeh Dil reviews
release date
Tushaar Kapoor, Natasha
theatres list
Follow @fullhyderabad
Follow fullhyd.com on
About Hyderabad
The Hyderabad Community
Improve fullhyd.com
More
Our Other Local Guides
Our other sites
© Copyright 1999-2009 LRR Technologies (Hyderabad), Pvt Ltd. All rights reserved. fullhyd, fullhyderabad, Welcome To The Neighbourhood are trademarks of LRR Technologies (Hyderabad) Pvt Ltd. The textual, graphic, audio and audiovisual material in this site is protected by copyright law. You may not copy, distribute, or use this material except as necessary for your personal, non-commercial use. Any trademarks are the properties of their respective owners. More on Hyderabad, India. Jobs in Hyderabad.