Around The World In Eighty Days Review 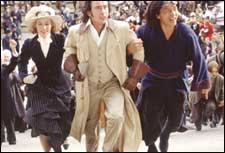 Charisma Murari / fullhyd.com
EDITOR RATING
6.0
Performances
Script
Music/Soundtrack
Visuals
NA
NA
NA
NA
Suggestions
Can watch again
NA
Good for kids
NA
Good for dates
NA
Wait for OTT
NA
Phileas Fogg (Steve Coogan) is a madcap inventor whose motto for his valet is, "I am here to provide a positive employment experience. So, please direct your aggravations elsewhere". And it works, too. Um umm… like a charm. They direct, not only their aggravations but the rest of them as well, elsewhere. With a high employee turnover rate, Phileas knows that good help is hard to find.

And when he finds Passepartout (Jackie Chan) who willingly slaps on a jetpack on his ass and zooms off to shatter the 60 miles per hour speed barrier (!), Phileas is thrilled to finally meet a valet who is courageous enough to test his inventions. Well, there is a fine line between courage and stupidity, but, in all fairness, Passerpartout manages to stay on one side most times - on the side of stupidity.

Phileas Fogg lives in an age (the year 1872) where the general belief is that everything that could have been invented/discovered has been. But Fogg challenges that notion and soon finds himself taking a wager on his hypothesis that it is possible to circumnavigate the globe in no more than 80 days, and in a manner that allows cameos by Arnold Schwarzennegger, Owen Wilson, Rob Schneider (okay, he pops his head in, almost everywhere), and a few others.

The stakes for the wager are high. If Phileas wins, then the boss-man of the Royal Academy Of Science must forfeit his position to him, and if Phileas loses, then he must forever give up his scientific ambitions.

There is an army of taekando thugs chasing Passerpartout because he's reclaimed the Jade Buddha that belongs to his village in China from The Bank Of England. There's also a barrage of folks employed by Mr. Boss-man in order to delay Fogg. And prolong the movie. Man, this thing rolls on for 2 whole hours without any regard for the bladder!

The 2004 version of the classic does not have anywhere close to the 40 cameos that the 1956 Oscar Winner did, and neither will it find itself holding an Oscar. Disney's latest outing, like its last few, is, perhaps, destined for a lukewarm response at the box office, but it will wring out a few laughs before it dies trying.

New doesn't necessarily mean improved. A lot of it has been modified to keep the spotlight on Chan, and that may not really be a good thing. Anyway, this thing does deserve a trip to the theatres with the 10 year olds. And, if you are feeling flaky enough, for the 10 year old in you.
Share. Save. Connect.
Tweet
AROUND THE WORLD IN... SNAPSHOT
AROUND THE WORLD IN EIGHTY DAYS SNAPSHOT

ADVERTISEMENT
This page was tagged for
Around The World In Eighty Days english movie
Around The World In Eighty Days reviews
release date
Jackie Chan, Steve Coogan
theatres list
Follow @fullhyderabad
Follow fullhyd.com on
About Hyderabad
The Hyderabad Community
Improve fullhyd.com
More
Our Other Local Guides
Our other sites
© Copyright 1999-2009 LRR Technologies (Hyderabad), Pvt Ltd. All rights reserved. fullhyd, fullhyderabad, Welcome To The Neighbourhood are trademarks of LRR Technologies (Hyderabad) Pvt Ltd. The textual, graphic, audio and audiovisual material in this site is protected by copyright law. You may not copy, distribute, or use this material except as necessary for your personal, non-commercial use. Any trademarks are the properties of their respective owners. More on Hyderabad, India. Jobs in Hyderabad.