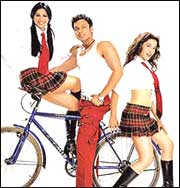 Deepa Menon / fullhyd.com
EDITOR RATING
1.0
Performances
Script
Music/Soundtrack
Visuals
NA
NA
NA
NA
Suggestions
Can watch again
NA
Good for kids
NA
Good for dates
NA
Wait to rent it
NA
Despite the fact that on several occasions in the past you have blatantly ignored our advice and gone on to watch perfectly bakwas movies, we still have a duty to do. So, in the interests of public safety, here's our Miranda warning regarding this particular motion picture: You have the right to not watch this movie. Anything you see can and will be used against you in a court of law. Possibly at an insanity hearing. You have the right to speak to a lawyer, although if you force him to sit through said movie, he might quadruple his charges. If you cannot afford a lawyer well, you're pretty much on your own.

As we all were during the screening of Popcorn Khao Mast Ho Jao. We were a small group of people, belonging to different religions, backgrounds, and political convictions, all bound together by fear. Fear that this movie might never end. Fear that we might never see our families again. Fear that nothing we say later can ever do justice to the atrocities we've witnessed. We held onto to each other and prayed. Some of us cried.

Of course, some might say we had a death wish. After all, the movie is called friggin' Popcorn Khao Mast Ho
Jao.

The film starts off at a Bollywood-induced campus in Sanganer, where the (gag) hero and his cronies hang out. This is the sort of college with corporate-sponsored prom nights, cheerleaders and a Betty Cooper-Archie Andrews-Veronica Lodge type love story.

Rahul (Akshay Someone Please Run Me Over Kapoor) belongs to a gang they called the Kurta Gang, presumably because he wears a kurta. Tanya (Tanisha Look I Have Nice Hair Mukherjee) is madly in love with aforementioned loser, but he is so lost in his ambition to make it big that he can't see it. Goldie (Yash What Is With The Sequins On My Shirt
Tonk) is a good friend, who loves Tanya but it ain't gonna happen. Sonia (Rashmi Whatever Nigam) is the babe that Rahul earnestly aspires to do. But she's so out of his league, it's not humorous.

To realize his dream of hitting it big in Bollywood, Rahul shifts his gormless thopda to Mumbai and breaks of all contact with his childhood buddies for five years. When they all meet again, he is a new man. Hah, you wish! No, he's the same old man but now he's an up and coming music director, whose boss' daughter happens to be the much-lusted-over Sonia.

Rahul's friends come to see him, but he's too busy chasing Sonia's microscopic skirt. Tanya is still in love with him, and he still can't see it. So, in mourning, she dedicates the rest of the film to wearing transparent chiffon sarees, standing in a breezy area and flicking her hair mournfully. Goldie cannot bear to see her like this, but unlike the audience who shares a similar predicament, he gets to go out there and have some fun. He pataos the
movie's babe, the one the posters call this season's hottest item girl (Jelena Jakovljevi). She's about as animated as sawdust, but we doubt anybody will notice she even has a face.

The plot goes absolutely nowhere and takes you along, kicking and screaming. In the process, you're subjected to Deepak Tijori in a wig and other spine-chilling sights. The movie does end at some point, contrary to popular opinion. But it also begins at some point, and that ideally is the point at which you should leave the building.

ADVERTISEMENT
This page was tagged for
popcorn khao mast ho jao full movie
Popcorn Khao hindi movie
Popcorn Khao reviews
release date
Akshay Kapoor, Tanisha
Follow @fullhyderabad
Follow fullhyd.com on
About Hyderabad
The Hyderabad Community
Improve fullhyd.com
More
Our Other Local Guides
Our other sites
© Copyright 1999-2009 LRR Technologies (Hyderabad), Pvt Ltd. All rights reserved. fullhyd, fullhyderabad, Welcome To The Neighbourhood are trademarks of LRR Technologies (Hyderabad) Pvt Ltd. The textual, graphic, audio and audiovisual material in this site is protected by copyright law. You may not copy, distribute, or use this material except as necessary for your personal, non-commercial use. Any trademarks are the properties of their respective owners. More on Hyderabad, India. Jobs in Hyderabad.