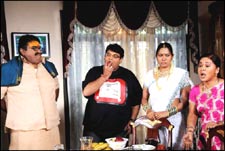 Deepa Garimella / fullhyd.com
EDITOR RATING
4.0
Performances
Script
Music/Soundtrack
Visuals
7.0
4.0
6.5
6.0
Suggestions
Can watch again
No
Good for kids
No
Good for dates
Yes
Wait to rent it
Yes
The intent, in the case of Kothi Mooka, is sharper than its production values. Scripted and directed by AVS, and starring him in the lead role, this film is like a modest, well-meaning and unpretentious politician who can't help but make sense in his speeches and yet won't get as many votes as the rest, because he doesn't take care of the important frills. And yes, flamboyance is one of them.

However, while it sets out clear-headed in its social critique, in its fundamental set-up it asks you to take a leap of faith and believe something that is unconvincing. The flick basically revolves round a haves vs have-nots battle, and pitches two opposite ends of that spectrum against each other.

So when AVS decides to make a beggar the protagonist, he does it in a rather fairy-tale fashion; he uses the beggar as a prop for his essay just because it is a good prop, not focusing on building up background details.

The movie starts off as a love story, with Ramana (Krishnudu), the son of a depraved MLA Aakula Appa Rao (Jayaprakash Reddy), trying to woo Lavanya (Shraddha Arya). Lavanya tells him she can't love him back because of her circumstances. These circumstances shock Ramana, whose mother (Kovai Sarla) and aunt (Hema) sympathize with him though they are equally jolted.

The father, as expected, is beyond livid, and in the irrational way that a power-driven egomaniac can be. What Ramana then sets out to do is pitch his prospective father-in-law Anji (AVS) - a faint-hearted, feeble tramp asking for alms on the streets - against his father, on the political battlefield.

One of the places where this film goes wrong is in not caring to explain the whole beggary bit - this man's daughter is a well-educated lecturer, and he is literate himself and can sign his name, and yet begs. To further add to the bizarreness, he begs not for himself but for the rest of the beggars in his community.

But if you ignore that lack of attention to detail, you'll see where Kothi Mooka is headed. The movie gets better towards the end, when it finally gets its priorities right, and when Anji's character finally comes into form.

The rest of the movie almost seems like a waste of effort, and you wish AVS had directly started with the real thing, setting all the riff-raff aside. Else, he should have drawn out a more detailed courtship and put in a little more thought into the weak comedy - both of which are the shortcomings that keep the flick to a rather pedestrian level for a long time.

Still, it is a film with a level of IQ that is much above average than is normally seen in low-budget offerings, and there's no one in the cast that doesn't take it seriously. The uninteresting moments come in because of a general listlessness in individual scene-writing.

Well Mani Sarma has composed the music for this movie, and there are some pretty nice numbers sprinkled at the right intervals.

We'd champion this film wholeheartedly if it were a better effort, but if you could lower your standards a bit, we'll probably still go ahead and do it.
Share. Save. Connect.
Tweet
KOTHI MOOKA SNAPSHOT

ADVERTISEMENT
This page was tagged for
Kothi Mooka telugu movie
Kothi Mooka reviews
release date
AVS, Krishnudu
theatres list
Follow @fullhyderabad
Follow fullhyd.com on
About Hyderabad
The Hyderabad Community
Improve fullhyd.com
More
Our Other Local Guides
Our other sites
© Copyright 1999-2009 LRR Technologies (Hyderabad), Pvt Ltd. All rights reserved. fullhyd, fullhyderabad, Welcome To The Neighbourhood are trademarks of LRR Technologies (Hyderabad) Pvt Ltd. The textual, graphic, audio and audiovisual material in this site is protected by copyright law. You may not copy, distribute, or use this material except as necessary for your personal, non-commercial use. Any trademarks are the properties of their respective owners. More on Hyderabad, India. Jobs in Hyderabad.