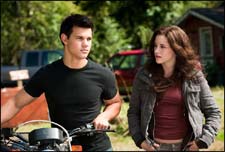 Deepa Garimella / fullhyd.com
EDITOR RATING
6.0
Performances
Script
Music/Soundtrack
Visuals
7.0
5.0
7.0
7.0
Suggestions
Can watch again
No
Good for kids
No
Good for dates
Yes
Wait to rent it
No
"I've never been normal, and I never will be," sighs Bella wistfully.

Teenage brings on a fascination for the morose and the sorrowful, and it is the stage of life from when we start wanting to believe that we are complicated beings who can be happy only through artificially-induced means. This is a concept that The Twilight Saga completely capitalizes on, building up melancholy over nothing much at all.

Eclipse, the third in the Twilight series, is a lot like either of its predecessors, both in mood and in the plotlessness. Luckily, it still retains its key strength - that its romance is pretty tender and mildly riveting.

Basically, this is the installment in which Bella (Kristen Stewart) is trying to get vampire poster boy Edward Cullen (Robert Pattinson) to make her an immortal vampire. She must be protected from the evil bloodsuckers led by Victoria (Bryce Dallas Howard), who has set upon Bella's trail a fleet of new-borns, to finish her off.

Bella's love life throws up something for fans of the character that is arguably most easy to call "real" among the three - Jacob (Taylor Lautner). The love triangle that kept simmering throughout the second part of the series is set on fire here, as Jacob plants a full-fledged kiss on Bella's lips after confessing to her that he loves her.

And the whole drama around the 3 principal characters, with Bella being emotionally involved with both the men courting her, is funny. It is amusing in the way that an outsider would look at contrived and self-inflicted agony that needs a therapist to be treated.

For by-standers, it's hard to see what exactly has the teeny-bopper crowd hooked, if not for the eye candy all over the screen. The mournful air, the sad and pensive breathing in and breathing out of the dialogues, the basic unwillingness by the characters to find cheer in any of the proceedings - it's all like a sombre party of the undead all over.

The writing remains what it has always been; but like we said, it is the romance that works in the flick. There's not much of a gripping plot, and audiences who've just walked into the franchise will feel distanced from the story - this is, after all, a movie that is happy enough to be an intimate feast for the die-hard fans.

The acting's probably improved over the installments; there's anyway really not much the actors have to do by way of being emotive. Stewart looks thankfully more full of life than before, and between the guys, it is Taylor Lautner who has a meatier role.

If you didn't already know, Twilight isn't an SFX offering. A little werewolf-vampire combat action, vampires being smashed as though they were made of Plaster Of Paris, and a brief look at Edward's glistening skin is about all that you get to see on that front. The movie has been filmed in breathtaking locales, though.

Evidently, Twilight is not a force that all the thinkers of the world can get together and stop. All we'd say you may as well see what the phenomenon is about; it won't hurt.
Share. Save. Connect.
Tweet
THE TWILIGHT SAGA -... SNAPSHOT
THE TWILIGHT SAGA - ECLIPSE (HINDI) SNAPSHOT

ADVERTISEMENT
This page was tagged for
the twilight saga eclipse movie hindi download
the twilight saga eclipse movie in hindi download
Twilight esclap movie download hindi
twilight eclipse download in hindi
twilight the saga eclipse full movie in hindi download
Follow @fullhyderabad
Follow fullhyd.com on
About Hyderabad
The Hyderabad Community
Improve fullhyd.com
More
Our Other Local Guides
Our other sites
© Copyright 1999-2009 LRR Technologies (Hyderabad), Pvt Ltd. All rights reserved. fullhyd, fullhyderabad, Welcome To The Neighbourhood are trademarks of LRR Technologies (Hyderabad) Pvt Ltd. The textual, graphic, audio and audiovisual material in this site is protected by copyright law. You may not copy, distribute, or use this material except as necessary for your personal, non-commercial use. Any trademarks are the properties of their respective owners. More on Hyderabad, India. Jobs in Hyderabad.