Once Upon A Time In Mumbai Review 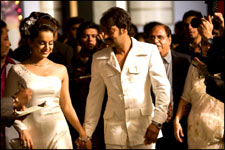 Deepa Garimella / fullhyd.com
EDITOR RATING
5.0
Performances
Script
Music/Soundtrack
Visuals
9.0
5.0
7.0
7.0
Suggestions
Can watch again
No
Good for kids
No
Good for dates
Yes
Wait to rent it
No
It is true that Hindi cinema, in all its endeavors to be spontaneous and all "grown-up", has forgotten to celebrate cinema for what it once was - a seller of sheer drama. Indeed, Om Shanti Om was the last time absolute camp was enjoyed thoroughly, even though it needed tremendous star power to pull it off.

This is one of the reasons Once Upon A Time In Mumbai, despite being as decently-crafted as it is, might not find many takers, given that there tends to be some condescension nowadays about anything that resembles old-fashioned cinema. The other reason, of course, is that this is a gangster plot like most others you have seen.

Once Upon A Time... isn't about the '70s as much as it is made like the movies of the '70s. It is marked mostly by heavy prose masking as dialogue, delivered with theatrics and affected mannerisms; and laboured styling of sets and characters, complete with the bell bottoms and psychedelic shirts for the men and the long hair, tight chudidars and elaborate make-up for the women.

Script-wise, as well, it is a film that harks back to the wry and sarcastic days of the self-righteous Robinhood whose oppressive childhood gave him no choice but to follow the career path he's following.

So Sultan Mirza (Ajay Devgn), the underworld don who ruled esrtwhile Bombay, comes with no surprises. He's god-fathered an entire sub-society of the huddled masses, who love him to bits. Plus, since he's only into smuggling and not into contraband, or even stuff that bred hatred among the commoners, he's never really "dirtied" Bombay.

His protege Shoaib (Emraan Hashmi) idolizes him. He grew up being inherently wicked and reckless, and gets drawn to Sultan's world - like every other youngster in the community. It is the journey of their chemistry that makes up a lot of the flick.

The story is told from the point of view of a cop (Randeep Hooda), who is tormented by the belief that he failed to contain Mumbai's mafia and instead actually allowed it to breed to inexcusable proportions.

And alongside, there is the passion between Sultan and Rehana (Kangana Ranaut), the reigning diva of the time; and the conflicted relationship that Shoaib shares with his rather upright and sensible girlfriend (Prachi Desai).

Despite the plot being a little too easy-going and simplistic, and the fact that most of its characters have no logical conclusion, it is fascinating to see the simple-minded character-building that takes place in Once Upon A Time..., and the tongue-in-cheek lines that each and every person is made to spout. Interestingly, it is the kind of thing that a south-Indian movie-watcher is frequently exposed to.

If it weren't for the simmering intensity of Devgn, the plotline of the flick could have been tough to hold on to, frankly. This is because Sultan's glorification is way too familiar, taking off from the Sarkars and the Godfathers of the world, and the character wouldn't have been interesting if there was no one to literally caress its finer nuances.

Among Devgn's wryness, Emraan Hashmi's sniggers and Randeep Hooda's eagerness to be Inspector Vijay, the men do a fine job of acting, even if they're made to be over-theatrical. Kangana Ranaut, however, turns out rather air-headed, thanks to the exaggerated mannerisms of the '70s-heroines that she's just not able to pull off. This is where Prachi's limited role is a bummer, since she's easily the more free-spirited actress of the two.

And a bit about the music - Pritam pitches in with a rather high-intensity retro feel for the background score, but his songs are a treat.

Once Upon A Time... is a good film for the genre that it is in, but if this isn't your kind of cinema, you might want to look for other options.
Share. Save. Connect.
Tweet
ONCE UPON A TIME... SNAPSHOT
ONCE UPON A TIME IN MUMBAI SNAPSHOT

ADVERTISEMENT
This page was tagged for
Once time in mumbai
time in mumbai
Once Upon A Time In Mumbai hindi movie
Once Upon A Time In Mumbai reviews
release date
Follow @fullhyderabad
Follow fullhyd.com on
About Hyderabad
The Hyderabad Community
Improve fullhyd.com
More
Our Other Local Guides
Our other sites
© Copyright 1999-2009 LRR Technologies (Hyderabad), Pvt Ltd. All rights reserved. fullhyd, fullhyderabad, Welcome To The Neighbourhood are trademarks of LRR Technologies (Hyderabad) Pvt Ltd. The textual, graphic, audio and audiovisual material in this site is protected by copyright law. You may not copy, distribute, or use this material except as necessary for your personal, non-commercial use. Any trademarks are the properties of their respective owners. More on Hyderabad, India. Jobs in Hyderabad.