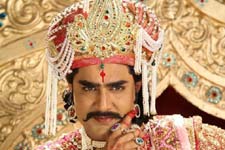 Deepa Garimella / fullhyd.com
EDITOR RATING
3.0
Performances
Script
Music/Soundtrack
Visuals
7.0
2.0
5.0
4.0
Suggestions
Can watch again
No
Good for kids
No
Good for dates
No
Wait for OTT
No
The first question that strikes you as you watch Devaraya (other than "Who let me out of the mental asylum?") is "What is Srikanth doing in a film like this?" Then comes "What is this film doing?", followed by "What?" Devaraya is a stunningly bad creation. In being a bad movie, Devaraya cuts across genres - "sociofantasy", religious, romantic and action.

Normally, Sri Krishnadevaraya is known to all of us common Telugus as the A-1 of kings - a kind, handsome dude who loved to watch classical dances, write nice poetry and keep his citizens happy. But apparently, something went wrong. And this happened.

The first half of Devaraya is set in today's times, in a village. Dorababu (Srikanth) is the local sleazeball whose three daily pastimes are drinking with an equally asinine bunch of cronies, playing cards and bedding women. The last activity is constantly described in the film with the elegant metaphor "gokadam". The rest of the dialogues are beeped out.

Life, for Dorababu, is an endless item song. Until Swapna (Vidisha) walks in. Dorababu wants to "scratch" her, too, but soon realizes she's out of his league, all the while not realizing that Swapna, inexplicably, has fallen in love with him.

Meanwhile, in Hyderabad, some archaeologists (led by Shivaji Raja) are busy brushing the dust off some objects they found near the Godavari. They suspect that they belong to Krishnadevaraya.

But this defies all logic. Krishnadevaraya ruled the Vijayanagara kingdom, so how did his belongings end up way over here?

A Telugu scholar (Ranganath, who is the only streak of sanity in this circus), who happens to be Swapna's grandfather, provides the answers by way of an ancient book the archaeologists dug out. So as it turns out, back then, the bejewelled, regal, astute Krishnadevaraya happened to fall head-over-heels in love with the court dancer Sunanda (Meenakshi Dixit). We all know that Srikrishnadevaraya patronized art forms like Kuchipudi, which, as the movie will tell you, was an excuse for dancers to heave their chests. In addition, he was also way ahead of his time - he had the foresight to insert the words "nee abba" in his sentences when speaking to Babar's messengers.

Once, His Highness left the palace in disguise, for a midnight tryst with his lady love. This, mind you, in the middle of Babar sending him threatening messages by day. The king proposed marriage to Sunanda, who refused, saying that she'd rather be his "hrudaya rani" than marry him and become a prisoner in his palace. We wonder how the writers didn't choke on their ink when they wrote this part.

Krishnadevaraya then picked up a javelin, and declared that he would build a temple for their love wherever the javelin falls. The javelin, as you have rightly guessed, travelled from Karnataka to West (or East - if you're nit-picking our review, you should go watch the film) Godavari district.

Okay, it didn't go there all by itself - the weather Gods helped. Okay, they didn't help either - Adobe Photoshop did. But unfortunately, it landed right on an idol of the Goddess. Sages then warned the king of dire consequences because of his thoughtless act. He tries to set things right, but somehow, Fate is not kind to him.

Now, Dorababu discovers that he is actually Krishnadevaraya reincarnated, and that he is here to finish his unfinished business. The rest of the film is how he goes about his mission.

In the meantime, there is a ruthless businessman (Jayaprakash Reddy) trying to set up a cement factory at the temple site, Dorababu almost getting married to Swapna and an aghora whispering danger signs.

Devaraya has too much sleaze for a mainstream film. Dorababu's Casanova act makes you squirm in your seat, and the censor board's beeping fetish makes you wonder why the movie was released at all.

In addition, the film is a string of cliches and, needless to mention, glaring logical loopholes. The graphics are a joke, although there's no dearth of imagination.

Srikanth totally lives his character(s), but should stay away from movies like this one. The two girls are here for skin show. The other actors all do a great job but it's all for a lost cause.

Chakri's music might have worked in a better film, but Devaraya is the kind of grating nonsense that doesn't let you enjoy anything good going for it. The songs are quite annoying.

In sum, this is nothing you'd want to spend 2 hours of your life for. Stay away.
Share. Save. Connect.
Tweet
DEVARAYA SNAPSHOT 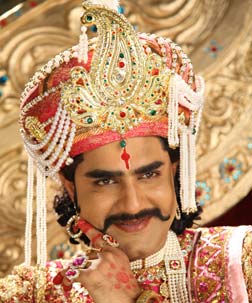 Also while taking history one should think about loop holes, because of that whole story went down.

ADVERTISEMENT
This page was tagged for
Devaraya telugu movie
Devaraya reviews
release date
Srikanth, Vidisha
theatres list
Follow @fullhyderabad
Follow fullhyd.com on
About Hyderabad
The Hyderabad Community
Improve fullhyd.com
More
Our Other Local Guides
Our other sites
© Copyright 1999-2009 LRR Technologies (Hyderabad), Pvt Ltd. All rights reserved. fullhyd, fullhyderabad, Welcome To The Neighbourhood are trademarks of LRR Technologies (Hyderabad) Pvt Ltd. The textual, graphic, audio and audiovisual material in this site is protected by copyright law. You may not copy, distribute, or use this material except as necessary for your personal, non-commercial use. Any trademarks are the properties of their respective owners. More on Hyderabad, India. Jobs in Hyderabad.