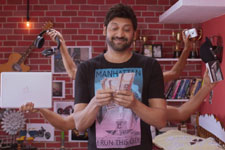 Josh / fullhyd.com
EDITOR RATING
6.0
Performances
Script
Music/Soundtrack
Visuals
7.0
6.0
6.0
7.0
Suggestions
Can watch again
No
Good for kids
No
Good for dates
Yes
Wait to rent it
Yes
Ever had one of those interviews where everything seems to go wrong but you clinch the job nonetheless? And you wonder what went on in the interviewer's mind? Well, we might have a clue. After watching Naruda Donoruda, this reviewer had one thought in mind - "There... I kinda like it. This one is going to be a positive review. But almost everything I have to write about the film is negative!"

Indeed, if we were to going to answer the basic question "Is this movie watchable?", we'd give you the simple and straight answer: "Yes, it is". The dialogues (Rachakonda Vidyasagar) are often hilarious. The humour is further aided by Sumanth's, Bharani's and Sri Lakshmi's uninhibited performances. Pallavi Subhash is a pleasant presence and doesn't have the deer-caught-in-headlights look when she performs. The music does its job and certainly doesn't put you to sleep. Lastly, for a film of such low budget, the frames feel rich.

Yes, we liked it all right. However, if one were to attempt to discuss the film, you have to acknowledge the shadow of Vicky Donor, and there we find so much to nitpick on.

Naruda Donoruda, if you are unaware, is the official remake of that successful Hindi film. The plot involves a jobless youth 'Vicky' Vikram (Sumanth) who is egged on by infertility specialist Dr. Anjaneyulu (Tanikella Bharani) to become a sperm donor. The stigma surrounding the activity spawns both humour and drama as Vicky negotiates love and finances while trying to stay secretive about his perfectly legal but socially awkward donations.

Now Vicky Donor was as much about its characters as it was about the plot. Vicky's mum, a Punjabi widow (played like a charm by Dolly Ahluwalia), runs a beauty parlour in Lajpat Nagar, looks after the jobless son, and settles down with her mother-in-law (Kamlesh Gill, the best thing about Vicky Donor) every night for a drink. The lady insists on having a Punjabi wedding for her son, and gets punch-drunk during the wedding. These characters fly in the face of Bollywood mother conventions but are still remarkably effective for a reason - it is Delhi.

That is not to say Lajpat Nagar is teeming with alcoholic single mothers. But should there be an entrepreneurial, Punjabi, lower middle-class lady there, you can see her in Dolly Ahluwalia. Anyone with any experience with Delhi (by which we do not mean visiting friends' houses in Gurgaon or partying in Saket - we're talking about interacting with people who've been in Delhi for generations) will tell you that Vicky Donor feels bloody authentic in its representation of the city. Alongside Khosla Ka Ghosla, and Oye Lucky Lucky Oye, Vicky Donor is practically a culture chronicle for the capital.

Now if you were to directly import this character from Lajpat Nagar to the streets of the Old City of Hyderabad, you're losing much of the magic. It sticks out, and casting a talent like Sri Lakshmi isn't going to help. If you are going to write this character into the Telugu script, you need to reinterpret it altogether and make it someone we know or meet in common social intercourse.

And it gets worse when you import the Bengali stereotypes that Vicky Donor paints the girl's family with. The Bengali folks in Vicky Donor speak a certain way, behave a certain way, and believe in certain things. Their supposed sophistication in contrast to the Punjabi boisterousness makes for delicious humour (the Mohan Bagan scene stands out!). However, all of that works because people in Delhi know and live with these stereotypes.

But Naruda Donoruda plays to a Telugu audience which knows little to nothing about any of these stereotypes. You're already losing your joke when you begin to explain the joke. Further, if you cast two Telugu actors as Bengali people and have them converse in comfortable Telugu, there's no Lost And Found section in the world that can help you. Your joke never stood a chance.

Remaking a template hit is easy. Remaking a beloved film, not so much. Particularly so if it's beloved for how culture-specific it is. Delhi is pretty much a character of Vicky Donor, and you don't find that character in Hyderabad. The makers of Naruda Donoruda should have hired a script doctor who could have grounded the characters in the Old City and found an appropriate other community to contrast it with (Malayalis? Brahmins? Nellore people?). That could have made the effort more fruitful.

Nonetheless, in the final reading, we found the film quite entertaining. Much of the writing talent goes into the sperm jokes that Bharani relentlessly rattles off throughout the film, and they all work. The performances, the sprightly music, and a neatly done climax all make it worth the two hours you have to kill.
Share. Save. Connect.
Tweet
NARUDA DONORUDA SNAPSHOT 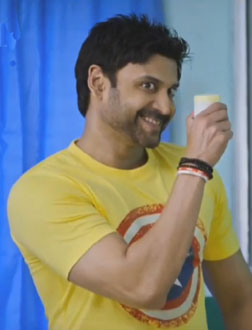 See Naruda Donoruda full details
NARUDA DONORUDA USER REVIEWS
1 - 2 OF 2 COMMENTS
POSITIVE  |  NEGATIVE |  NEWEST  |  OLDEST  |  MOST HELPFUL  |  LEAST HELPFUL
V SREENIVASA RAO on 6th Nov 2016, 4:11pm | Permalink
interesting in movie narudonaruda
Hari on 4th Nov 2016, 8:20pm | Permalink
Nailed it Josh. I admit, I neither watched nor plan to watch this movie. However, I knew this is going to happen knowing TFI. Vicky Donor is a personal favorite and I hoped it would not get remade in any language let alone in Telugu. There is so much to the original than just the story. The characters created that magic. Coming to this Telugu version, right from the cringe worthy title to casting, this was going in the wrong direction. You are absolutely correct in saying that the entire character arc should have been re-written but that is too much wishful thinking to expect our industry to put that effort. If a movie is a hit in another industry, it has to be remade. No reason to pause and think why the movie was a hit in the first place. If I may, please do not rate these "efforts" with above average ratings.
Josh on 5th Nov 2016, 4:24pm | Permalink
Thanks, Hari! I found the name tacky initially but I changed my mind after I heard it roll of Bharani's tongue. It is quite amusing after that.

Seen as a standalone film, this one is quite all right for me. It's better than a
lot of these "masala entertainers" or "horror comedies".

ADVERTISEMENT
This page was tagged for
Naruda Donoruda telugu movie
Naruda Donoruda reviews
release date
Sumanth, Pallavi Subhash
theatres list
Follow @fullhyderabad
Follow fullhyd.com on
About Hyderabad
The Hyderabad Community
Improve fullhyd.com
More
Our Other Local Guides
Our other sites
© Copyright 1999-2009 LRR Technologies (Hyderabad), Pvt Ltd. All rights reserved. fullhyd, fullhyderabad, Welcome To The Neighbourhood are trademarks of LRR Technologies (Hyderabad) Pvt Ltd. The textual, graphic, audio and audiovisual material in this site is protected by copyright law. You may not copy, distribute, or use this material except as necessary for your personal, non-commercial use. Any trademarks are the properties of their respective owners. More on Hyderabad, India. Jobs in Hyderabad.