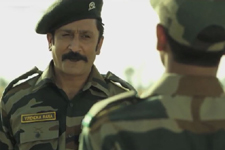 Nupur Barua / fullhyd.com
EDITOR RATING
4.0
Performances
Script
Music/Soundtrack
Visuals
6.0
4.0
5.0
5.0
Suggestions
Can watch again
No
Good for kids
No
Good for dates
No
Wait for OTT
Yes
Political satires are difficult to make. Not only do they have to entertain the audience, they also have to be relevant to current or past political scenarios. This often leads to caricature characters, who, in their effort to be nonchalant with their inanity, often end up annoying the viewer. The fault, of course, lies with the execution of a script, but it has been found that the audience does not really have patience with such stories on the big screen now - we have enough satire to last us a lifetime, live, on prime time television.

Jai Ho Democracy begins with a chicken. It is spotted in the area known as No Man's Land, and for some reason, both the Indian and the Pakistani armies at the border want to lay claim to this particular chicken. The Indian side sends a junior cook, and the Pakistani side sends a senior one, into No Man's Land, to retrieve the wandering chicken. While this becomes a question of border egos, another story unfolds in the civilian cultures of India.

The media, on whom this is a satire, too, is quick to jump the gun and accuse Pakistan of irregular activities at the border. With words such as "invasion" and "patriotism" bandied about, the entire country reacts to this. A committee is called to take a decision on the situation. Chaired by ex-Supreme Court Judge Ramalingam (Annu Kapoor), the six members of the panel belong to different parts of the country, and hence have different accents, as well as attitudes. As they battle it out in a conference room, it does not look like the country is headed anywhere constructive for a while.

The biggest flaw in the screenplay is the premise on which the director has executed an entire movie. It is a weak, flimsy theme fit for a fun YouTube video, and there is only so much that can be done around it. Everything else is then either contrived, convoluted or just plain silly. The script is stretched too thin, and things become repetitive. Any semblance of melodrama or emotion is handled poorly, and the message of the film, if any, is lost.

Certain portions with slapstick humour are actually a welcome break from the monotony of the movie trying to be an intelligent satire. Not that the wit is intellectual. That, too, becomes irritating after a point, but some portions, no matter how absurd, are funny. The dialogues seem contrived, and the effort, to add certain words and phrases in speech just to make it more effective, shows. The movie also taps into the whole futility-of-war business, but has nothing new to say about it.

Despite the weak screenplay, it is a delight to watch the actors in their individual roles, especially the ones who play the panel members of the committee. Annu Kapoor, who speaks in this movie with a Tamil accent, is the one who steals the limelight, of course. He seems to be enjoying himself. Satish Kaushik, who looks slightly irked at the role he plays, delivers yet another memorable performance. Adil Hussain does a terrific job with the Assamese accent and the confused agitation, and Seema Biswas keeps him company with her underplayed simple-woman politician. Om Puri looks a little under the weather, and Grusha Kapoor falters here and there. Aamir Bashir carries off the privileged, snooty politician character with élan. The rest of the cast manage to do their bit, too, but they are eventually all let down by a paper-thin plot point.

Jai Ho Democracy could have been an effective political satire, but is let down by erratic writing, and even more erratic editing. It is underwhelming, to say the least, and can easily be avoided, for now.
Share. Save. Connect.
Tweet
JAI HO DEMOCRACY SNAPSHOT 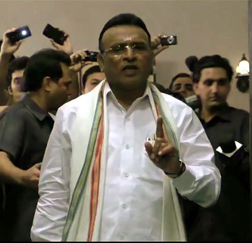 ADVERTISEMENT
This page was tagged for
Jai Ho Democracy hindi movie
Jai Ho Democracy reviews
release date
Om Puri, Annu Kapoor
theatres list
Follow @fullhyderabad
Follow fullhyd.com on
About Hyderabad
The Hyderabad Community
Improve fullhyd.com
More
Our Other Local Guides
Our other sites
© Copyright 1999-2009 LRR Technologies (Hyderabad), Pvt Ltd. All rights reserved. fullhyd, fullhyderabad, Welcome To The Neighbourhood are trademarks of LRR Technologies (Hyderabad) Pvt Ltd. The textual, graphic, audio and audiovisual material in this site is protected by copyright law. You may not copy, distribute, or use this material except as necessary for your personal, non-commercial use. Any trademarks are the properties of their respective owners. More on Hyderabad, India. Jobs in Hyderabad.