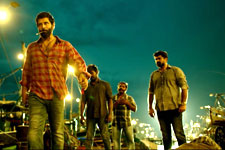 Daphne Rose / fullhyd.com
EDITOR RATING
5.0
Performances
Script
Music/Soundtrack
Visuals
6.0
5.0
5.0
5.0
Suggestions
Can watch again
No
Good for kids
No
Good for dates
No
Wait to rent it
Yes
For those of you wondering, the word "Sketch" is gang-slang for an elaborate scheme or strategy, with the movie deriving this name from its protagonist Jeeva aka Sketch, who as the enforcer of a loan shark is pretty much acing life in general thanks to these intricate little plans of his.

Wish one could say the same about the movie, though.

Director Vijay Chander's Tamil movie, set originally in the bad lands of North Madras, finds its setting moved to Vizag in its dubbed Telugu version. The eponymous Sketch (Vikram) is the right hand man of a local loan shark (Hareesh Peradi) whose financial operations revolve around giving people loans and commandeeering their vehicles over non-payment of dues. The loaning agency is somewhat of a family business for Sketch, with his having taken over the mantle of enforcer from his uncle, leading to tensions with another gang leader who doesn't care much for being sidelined by an upstart.

A parallel track involves a notorious goon (Babu Raj) whose prized possession is a vintage red Fiat that he drives in memory of his late father. The man won't tolerate anyone touching the vehicle, let alone driving it, so when Sketch spirits the vehicle away at the behest of his boss, a series of unfortunate events unfold, and somewhere along the way, make a movie in the process.

On the face of it, that actually seems like a pretty decent story - a gang war over a car and not the usual tropes of drugs, money or dames is a refreshing change. And for a movie to fall flat in spite of that (and a good cast) is an absolute pity.

The blame for that lies squarely on the director for he takes what could've been a halfway decent, if not excellent, movie and convolutes it beyond recognition. In trying to play to the galleries, Vijay Chander tries doing way too much in way too little time, leaving you with a profusion of half-baked characters who crowd the movie quite badly. Most of these one-line characters, including the heroine, are in the movie solely to satisfy the director's need of a "layered story" - this being a thriller perhaps.

Also, the romantic track is needless, the songs even though pleasant are incongrously placed, and everything ultimately leads up to a social message that pops at you from nowhere, sorely dulling the impact of it with nary a moment to allow you to fully take it in. Unfortunate, with a capital U, ladies and gentlemen.

Vikram, of course, needs no introduction. There's enough of his acting abilities on display in movies like Irumugan, Anniyan and Saamy. And he's the only reason to watch Sketch, given how he breathes life into his character. Right from his look to his mannerisms and the affectations in his speech, Vikram brings an easy charisma to his lovable goon. He plots, fights and romances with ready charm, and though there are scenes in which he seems a little haggard and looks his age, Vikram is the lifeboat which saves this drowning movie.

Which isn't to say that the character he portrays is perfect. In keeping with the "glorious tradition" of all Tamil male leads, he too stalks Ammu (Bhatia) whom he calls "White Momo" in an effort to woo her as the result of a drunken bet with his mates reminiscent of a "the whiter your chick, the bigger your balls" kinda scenario.

Bhatia, for her part, seems to have been given the drift of looking as white and acting as convincingly as she can. Exactly one of which she manages well. She appears in the movie for precisely two songs and six scenes (yes, we counted), and has literally zero value to add to the movie - not even as the love interest who gets kidnapped towards the climax so the hero can go save her. Nothing. Zilch. Nada. The only thing worth mentioning about her role here is her styling - we see her decked out in sarees mostly, shunning objectification of any sort, so a small yay for that.

Everything else about this movie, right from music and BGM to visuals, is strictly average. To cut to the chase, watch this one only if you're a Vikram fan, and even then not with a lot of hope for something path-breaking.
Share. Save. Connect.
Tweet
SKETCH SNAPSHOT 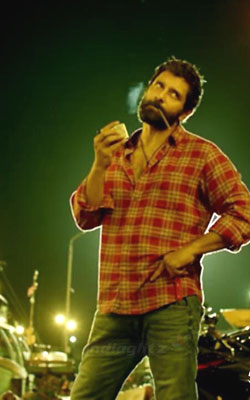 ADVERTISEMENT
This page was tagged for
sketch Telugu movie download
Sketch telugu movie
Sketch reviews
release date
Vikram, Tamannaah Bhatia
Follow @fullhyderabad
Follow fullhyd.com on
About Hyderabad
The Hyderabad Community
Improve fullhyd.com
More
Our Other Local Guides
Our other sites
© Copyright 1999-2009 LRR Technologies (Hyderabad), Pvt Ltd. All rights reserved. fullhyd, fullhyderabad, Welcome To The Neighbourhood are trademarks of LRR Technologies (Hyderabad) Pvt Ltd. The textual, graphic, audio and audiovisual material in this site is protected by copyright law. You may not copy, distribute, or use this material except as necessary for your personal, non-commercial use. Any trademarks are the properties of their respective owners. More on Hyderabad, India. Jobs in Hyderabad.