Ajay Kumar R / fullhyd.com
EDITOR RATING
3.0
Performances
Script
Music/Soundtrack
Visuals
2.0
3.0
4.0
3.0
Suggestions
Can watch again
No
Good for kids
No
Good for dates
No
Wait for OTT
No
Imbibing a strong moral compass, altruistic values and empathy are paramount to a young person's evolution into a responsible being. And a promo for a movie centered around the lives of a few troubled/troublesome boys and girls facing moral crises followed by earth-shattering epiphanies may result in sizeable crowds to the film's first few screenings. However the only good parts of P Srikanth's romantic bachelorette-social drama Ameerpeta Lo are all in the teasers, and are out of character for a film with a crumbling storyline.

Vivek (Srikanth) stays in a tiny shared accommodation along with Linga Babu a.k.a. Lingu (Sai Praneeth) and two other unmarried men (used as comic relief) in Ameerpet, Hyderabad. Together they live the stereotypical lives of the "unconscionable" unemployed youth: drink, gamble, sleep, repeat. Vivek and Lingu, whose lives don't overlap in a significant way throughout the movie despite their sharing a room, meet their girls (Sonia played by Ashwini, Venella played by Eesha) in separate incidents, and start rather immature and silly love lives with them, which mostly teenagers may relate to.

There are also other female and male characters in the film, all mutual friends of Vivek and Sonia. One girl tries to fit in with "modern" Hyderabad, while the rest of the girls are already way past the director's objective moral framework. And the remaining males are the generic "bachelors". But all these characters seem unnecessary for the progress of the story.

Anyway, things don't go well for Vivek and Sonia, and he reveals that he doesn't feel for her the way she does for him. And they break up. There is also trouble in Paradise for the faithful Lingu and his over-possessive girlfriend.

But soon, the youngsters are hit by epiphanous moments after they visit an orphanage where Sonia serves. They realize how lavish and reckless their lives are, and how small their problems are compared to those of the destitute orphans. And so they join Sonia in her overarching vision for the betterment of the poor kids. How this realization leads to their evolution forms rest of the story.

Ameerpeta Lo does not come off much as a movie about cultivating altruism or about the plight of the poor, despite its good intentions. But it certainly feels like a tale about the quintessential immoral bachelor and the film's own misogynistic views about what single women do behind closed doors. A few minutes into the movie, it screams out Pyaar Ka Punchnama, with all its whiny male characters and sexist lectures about women.

The narrator appears to sit in judgement, pretty much concluding that all bachelors who drink lack morals, and that single women are unethical for having a sex life when they are away from under the shadows of their families. And that people who have certain "bad habits" are bad human beings all over. The direction appears to portray morals in black and white, ignoring all the gray areas.

And the film's main failing is that that's actually not the case, and that it appears so since it begins with drunk and cunning bachelors who trick employers into giving them a job, and remains the same for the next hour and a half. It wastes a sizeable portion of its runtime before finally arriving at the almost nirvanic last fifteen minutes, when you come to know what the director actually wants to convey. You realize that the underlying message is about selflessness, but it is marred by significant screen-time to bigotry against women and unemployed bachelors.

Ashwini is convincing as an altruistic person, but her expressions lack soul as she goes overboard and turns artificial several times. Srikanth and the rest need to brush up their emotive skills or start from the scratch. None of the actors is impactful.

There is nothing much in the way of cinematography (Kiran Gyara) as it renders Ameerpet as it is - dusty and bustling with a yellow tint. Murali Leon doesn't strike a chord with his composition except for one song towards the end.

A social message embedded in a sexist plot is a risky affair. This one is great proof of that.
Share. Save. Connect.
Tweet
AMEERPETA LO SNAPSHOT 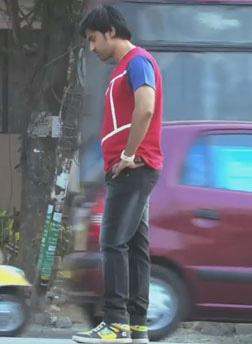 ADVERTISEMENT
This page was tagged for
Ameerpeta Lo telugu movie
Ameerpeta Lo reviews
release date
P Srikanth, Ashwini
theatres list
Follow @fullhyderabad
Follow fullhyd.com on
About Hyderabad
The Hyderabad Community
Improve fullhyd.com
More
Our Other Local Guides
Our other sites
© Copyright 1999-2009 LRR Technologies (Hyderabad), Pvt Ltd. All rights reserved. fullhyd, fullhyderabad, Welcome To The Neighbourhood are trademarks of LRR Technologies (Hyderabad) Pvt Ltd. The textual, graphic, audio and audiovisual material in this site is protected by copyright law. You may not copy, distribute, or use this material except as necessary for your personal, non-commercial use. Any trademarks are the properties of their respective owners. More on Hyderabad, India. Jobs in Hyderabad.