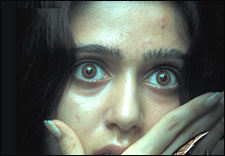 One of the things you should not do with Mantra - one of the slicker technical products and better thrillers to come out of Tollywood in, oh, a decade - is try putting two and two together at the end. Oh, a hell of a lot of things do not add up, two and two is nothing. But the point is, they scare you with all the red herrings - and how. And watching it in Sudarshan 35mm with its mercilessly thumping sound (the multiplexes aren't a scrawny patch on many RTC X Roads theaters) amplifies the thrills, even with the cacophonous audiences making a mess of the horror experience.

Mantra (Charmme) has to repay a loan, and needs to sell a house, Mantra Nilayam, that she owns in a desolate place to get the money. That house, however, has a reputation of being haunted, with all its last few tenants dying. A prospective buyer tells Mantra that if someone stays in that place for 3 months, he will buy it. Under pressure to repay the loan, Mantra herself decides to stay there, but a horrifying experience that she and her friend have results in them beating a hasty retreat.

Oh yes, did we mention they know how to scare the crap out of you?

A small-time goon Hero (Sivaji) then offers to stay there, hoping he can get some commission by selling the property for Mantra. He lands there with 3 friends including Munuswamy (Chitram Sreenu), and they do what all guys do when they are stuck together - they drink their guts out.

However, not everyone in the building is on a high. And when Muniswamy dies mysteriously, a determined Hero decides to stick on there until he figures out exactly what is going on.

Mantra is commerce overriding perfectionism, which most people refer to as common sense, and which, if you are really smart, you can even call creativity. It has plenty of horror movie thrills - and clichés - and not all of them tally up in the end, but the makers aren't really trying hard. They perhaps know the Tollywood equation - logic is merely a freebie thrown in, and not the product, or even a core component.

So you delightfully go through all the thrills and chills assuming they'll all coalesce seamlessly at the end. And when they don't, you don't really care, or perhaps even notice, for you've had the fun you wanted - the only person who tries to sit at the end of a suspense or horror thriller and see if just everything adds up is a film critic with nothing better to do.

Even cutting it that slack, there are flaws with Mantra - it has its parts where there seems to be nothing happening, and many times you actually see that they are trying to scare you just like that. But when there is indeed something evil on screen or lurking around it, it delivers with a wham, and that's quite often.

Sivaji is the hero, and there's no reason they should be projecting Charmme as the protoganist. Or maybe there is. The performances are all upmarket, and the 2 songs are chart-topping material if the film itself does well - especially Charmme's solo, which actually has the Shakira feel to it. The A/V experience is, of course, superb.

Mantra is rated A - justifiably. It's not for kids or people with weak hearts. And for a change, that's not because of Charmme.
Share. Save. Connect.
Tweet
MANTRA SNAPSHOT

ADVERTISEMENT
This page was tagged for
manthra reviwe telugu
mantra telugu movie release date
mantra telugu movie
mantra movie story
Mantra telugu movie
Follow @fullhyderabad
Follow fullhyd.com on
About Hyderabad
The Hyderabad Community
Improve fullhyd.com
More
Our Other Local Guides
Our other sites
© Copyright 1999-2009 LRR Technologies (Hyderabad), Pvt Ltd. All rights reserved. fullhyd, fullhyderabad, Welcome To The Neighbourhood are trademarks of LRR Technologies (Hyderabad) Pvt Ltd. The textual, graphic, audio and audiovisual material in this site is protected by copyright law. You may not copy, distribute, or use this material except as necessary for your personal, non-commercial use. Any trademarks are the properties of their respective owners. More on Hyderabad, India. Jobs in Hyderabad.