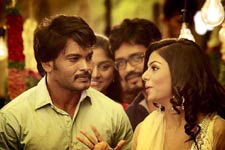 Deepa Garimella / fullhyd.com
EDITOR RATING
5.0
Performances
Script
Music/Soundtrack
Visuals
6.5
5.0
8.0
7.5
Suggestions
Can watch again
No
Good for kids
No
Good for dates
No
Wait to rent it
Yes
Honesty is a lonely, nerdy freak. He's not a very glamourous personality, and besides, think of it - girls don't swoon over men who righteously ask a traffic cop for a challan and then pay him Rs. 500 instead of bravely bribing him with Rs. 100 and "handling the situation" smartly.

In real life, morals are strange, abnormal ideals, feared by people with lives to lead and families to go home to. They are something best theorized and left to the mythology texts. Standing up for rights - yours or anyone else's - is greeted by tut-tutting "well-meaning" elders who cannot understand why you cannot "mind your own business" and "live a normal life".

Alias Janaki gets certain things right. Like the personification of the ideals it wishes to uphold - in the form of an unexceptional-looking hero (Rahul Venkat) who weeps easily. And by depicting the utter loneliness the protagonist goes through simply because he chooses a certain way of life.

This protagonist, Janaki Ram, is no rich kid, and neither is he a swashbuckling youth with an enigmatic factionist family tree. He's something far from extraordinary - he is a government servant, the son of a village school teacher (Naga Babu).

Having been brought up in the simplicity of the village, with staunch ideals and morals, Janaki moves to Hyderabad, where filth flows free and thick, even mixing with blood. Working at the GHMC gives him ample opportunities to discover the utter depravity that people in power sink to.

Alias Janaki is an intense, serious film that wants to talk about social evils. It starts off with noble intentions. Ram is the reticent type, scandalized, bewildered and enraged by the ways of the city and the people who lord over it. But as he discovers, merely standing up to the powerful doesn't help - there's a lot else you must be prepared to put up with, including being framed, and actually watching innocents die.

This aspect of the film is mostly nuanced, and realistic. There are no "filmi" touches - no over-the-top dialogues or unrealistic situations. In fact, Ram's powerlessless is well-conveyed. The movie's tone is that of a well-thought-out, purposeful, emotion-laden speech.

Plenty of violence abounds, though. And even if the violence doesn't seem too graphic to you, the movie does a good job of portraying pain and suffering. Case in point: the sequence with the rape victim, played by Ramya. No rape is actually shown (unless you count one scene in which the villain is forcing himself upon a woman, both fully clothed), but we are shown a scene which the battered woman reports the crime in a police station, and the cops are sneering and leching at her. Ram, an onlooker in the police station, bursts into tears. It is a sequence performed with consummate intensity by everyone involved, and is pretty heavy on the heart.

But eventually, Alias Janaki turns out to be simply a grimmer version of any regular good-guy-vs-bad-guy masala film. If, at the end of all the realism and all the idealism, the only way that you settle things is a fight - in which one man takes on 2 dozen others, and still has enough stamina to take on two dozen others a little later in the night - then what differentiates you from a Nayak or a Gabbar Singh in terms of writing?

Besides, the story-telling seems disoriented, because the narration keeps flitting between past and present.

The romance is a mood-killer, and the so-called heroine (Anisha Ambrose) wields the machete. It is sad that a person like Ram, who has such high principles to live by, and such serious official matters to pursue, should fall for a girl as silly as Chitra (Anisha Ambrose). Things were initially cute and all, but soon, the love track turns distracting. It does not help that the heroine, like everything else in the movie, talks in slow motion.

So Rahul Venkat - this new, unconventional-looking entrant from Chiranjeevi's family - does he have a future? He smoulders quite well in the brooding act, and he's great at shedding copious amounts of tears. So, strong and silent? Check. Sensitive? Check. Beefy? Check. Also, his screen presence is quite good for a debutant.

If the only career option open to him is that of a conventional "hero", then it will be a tough hike uphill, because he doesn't look the part. Meanwhile, when shot in certain angles, the resemblances to Chiranjeevi are evident.

Anisha Ambrose is a misfit in a film like this. Sure, she looks good, wears nice jewellery, and all that, but that's about it. The real heroine here is Ramya, who shows brilliance in her limited, de-glam role.

Naga Babu is his usual self, but suffers from a bad hairdo. Tanikella Bharani is effective as Janaki Ram's unscrupulous, calculative boss. There's also a comedian who appears on the televison show Jabardasth, who plays a nice little role quite well in the movie.

Half the film's character comes from its music. In fact, even the lead actor derives some of his on-screen dazzle from the music. The songs are beautiful works of art. The movie's cinematography is stylized and quite pleasing. But since it has violence and a strong theme, it is unsuitable for kids.

Alias Janaki does deserve a watch for its intent. But if you care two hoots about intent, then wait for the more famous of Chiranjeevi's relatives to burst onto the screens the next week and after.
Share. Save. Connect.
Tweet
ALIAS JANAKI SNAPSHOT 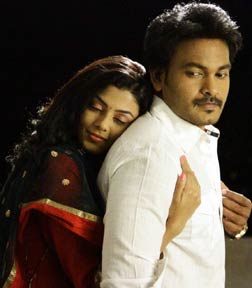 ADVERTISEMENT
This page was tagged for
Alias Janaki telugu movie
Alias Janaki reviews
release date
Rahul Venkat, Anisha Ambrose
theatres list
Follow @fullhyderabad
Follow fullhyd.com on
About Hyderabad
The Hyderabad Community
Improve fullhyd.com
More
Our Other Local Guides
Our other sites
© Copyright 1999-2009 LRR Technologies (Hyderabad), Pvt Ltd. All rights reserved. fullhyd, fullhyderabad, Welcome To The Neighbourhood are trademarks of LRR Technologies (Hyderabad) Pvt Ltd. The textual, graphic, audio and audiovisual material in this site is protected by copyright law. You may not copy, distribute, or use this material except as necessary for your personal, non-commercial use. Any trademarks are the properties of their respective owners. More on Hyderabad, India. Jobs in Hyderabad.