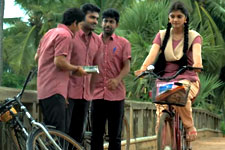 Neema Pramod / fullhyd.com
EDITOR RATING
7.0
Performances
Script
Music/Soundtrack
Visuals
7.0
6.0
7.0
8.0
Suggestions
Can watch again
Yes
Good for kids
No
Good for dates
Yes
Wait for OTT
No
More than halfway into Raja Vaaru Rani Gaaru, a character remarks, and I paraphrase, "There are many stories about those who manage to express their love, but there are hardly any stories about the ones who fail to do so." Raja Vaaru Rani Gaaru is the story of one such man who just cannot summon the courage to confess his feelings to the woman he loves.

Raja (Kiran Abbavaram) has been in love with his classmate Rani (Rahasya Gorak) from even before he knew the meaning of the term. However, he is never able to bring himself to convey it to her.

Eventually, Rani moves out of their village for higher studies after they finish their intermediate education, leaving Raja with no inkling of her whereabouts. Three and a half years later, circumstances force Rani to return to their village, putting an end to Raja's desperate longing. But will he manage to finally overcome his fear and express his feelings before it is too late?

Raja Vaaru Rani Guru is essentially the lovechild you would get if you crossed the unshowy cinematography of the Malayalam superhit Premam and the quirky musical nature of the Kannada superhit Kirik Party. Interestingly, both these films were remade in Telugu as Premam and Kirrak Party respectively, but neither of them could capture the natural feel their originals had. However, Raja Vaaru Rani Gaaru manages to create that effect for the Telugu viewers.

There isn't much here in terms of plot, but that hardly matters when what you see on screen is sheer beauty. Most of our films don't really have a sense of place - a movie can shift from Hyderabad to Vizag and you might hardly feel the difference - but the small village in East Godavari where Raja Vaaru Rani Gaaru is set is almost a character in itself. The locales look stunning without any artificial embellishments (the cinematography is by Vidyasagar Chinta and Amardeep Guttula), and by the time the credits roll you feel like you really know the village and its inhabitants. A "Thanks to Nature" card appears at the beginning of the film, and by the end you can see why.

The people of this village are just as interesting. The character of Raja is perhaps the most uninteresting of all - he doesn't have many shades except for his fear of expressing his love - but he comes as a breath of fresh air amidst most of our mainstream heroes who usually stalk their love interests until they have no choice but to submit to the hero's "true love". I was especially charmed by this line in his love letter that went like, "I know it is not right to love you without asking you." If only all our heroes had this kind of clarity! Kiran Abbavaram brings out the niceness and simplicity of the character in such a convincing manner that you can't help but root for him.

Rahasya Gorak as Rani also does a good job playing a role that requires her to convey her emotions in such a way that we don't know exactly what she is feeling, but she still does not appear too opaque.

However, it is Rajkumar and Yazurved as Chaudhari and Naidu respectively - Raja's best friends and partners-in-crime - who walk away with the film. Their antics to help Raja confess his love have the audiences in splits. Each time the film feels like it is testing your patience, one of them comes up with some wisecrack or the other that loosens you up again. The two of them create many hilarious moments that you will probably still be laughing at a few years down the lane - like the scene where Naidu is trying to make out with his girlfriend, or the one where Chaudhari's father berates him for failing his exams. The actors have fantastic comic timing.

The other characters are also quite endearing, as are the actors playing them - be it Swetha, the girl who holds a torch for Raja, Rani's loud grandmother or Rani's father who just won't stop boasting about the fact that his daughter's doing a degree in "integrated engineering" (this is a recurring bit that makes for a great laugh). And then of course, there is the music. Jay K's songs are wonderful, and his score is even better. They just infuse life and energy into the narrative, especially the songs that come in the first half. The second half could have done away with one or two songs, though.

After a breezy first half, the second half does stretch a bit. A couple of scenes could have been have chopped off or trimmed. The episode with Rani's baava does slow things down considerably, though without it the film wouldn't have gotten the non-linear narrative that makes it all the more engaging. The conclusion to that episode was also something I never saw coming, and was a delightful surprise. And as mentioned, the actors, the dialogues, the visuals and the score help a great deal in elevating the movie when the script falls short.

With Raja Vaaru Rani Gaaru, director Ravi Kiran Kola has made a remarkable debut, and it looks like he is here to stay. It is not an easy task to stretch a one-line story into a full-length feature film that is entertaining for the most part, but he does it quite well. Though the movie might feel slow for the average film-goer, the rip-roaring comedy and the charming romance will leave a mark on you. I, at least, cannot remember the last time I smiled and laughed so much in a theatre.
Share. Save. Connect.
Tweet
RAJA VAARU RANI GAARU SNAPSHOT 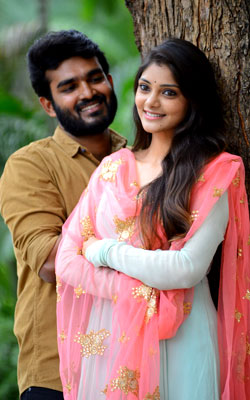 ADVERTISEMENT
This page was tagged for
Raja Vaaru Rani Gaaru telugu movie
Raja Vaaru Rani Gaaru reviews
release date
Kiran Abbavaram, Rahasya Gorak
theatres list
Follow @fullhyderabad
Follow fullhyd.com on
About Hyderabad
The Hyderabad Community
Improve fullhyd.com
More
Our Other Local Guides
Our other sites
© Copyright 1999-2009 LRR Technologies (Hyderabad), Pvt Ltd. All rights reserved. fullhyd, fullhyderabad, Welcome To The Neighbourhood are trademarks of LRR Technologies (Hyderabad) Pvt Ltd. The textual, graphic, audio and audiovisual material in this site is protected by copyright law. You may not copy, distribute, or use this material except as necessary for your personal, non-commercial use. Any trademarks are the properties of their respective owners. More on Hyderabad, India. Jobs in Hyderabad.