He, She... Ladies, Gents... Men, Women... Streelu, Purushulu... Ammayilu Abbayilu... If you thought the title sounds like the boards at a loo, you are right. And if you are expecting a 'comedy' with toilet humor, you are darned right again.

Repulsive, revolting, repugnant and positively obnoxious are four words that I can think offhand to describe this film. Okay, appalling and dreadful too maybe, on second thoughts. Some films are bad, and some are in bad taste. This one's a hybrid between the two genres. So it's official now. With this flick, the Telugu film industry has really hit rock bottom. 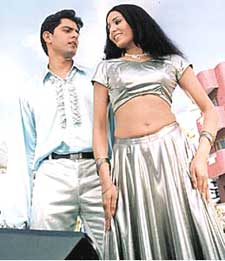 Going by the antics in the movie, it has been presumed it was made with the intention of showcasing it as a comedy. Let us warn you that humor (???) in the movie comprises scenes like a puny guy trying to impress girls by padding his bums so that he looks hot and desirable; an undersized, obese man and his bid to impress his tall, gigantic wife; a huge, buxom and eternally randy woman who can't enough if it from her hubby and her attempts to get it from the puny guy; this guy's attempts to shave off a crop of hair from his chest; a dog on heat that always chases him etc. 'Sick' is an understatement here.

Meanwhile, the romance (???) in the movie comprises scenes like a listless girl's attempts to express her love for the neighborhood guy. Since there are no reasons assigned to why this dame should love this dude, we presume it's because she thinks he has the sexiest inoculation marks on his arms in this part of the city. Then we have the dumb dude (okay, he looks good, but that's no consolation) and his attempts to avoid girls and their propositions; another svelte, slim and eternally randy girl and her attempts to spend the last day of her virginity with the aforementioned dumb dude etc. Ridiculous is an understatement here.

Then there are some random insertions of a witch's attempt to make the scrawny guy fall in love with her, a Dad who beats up his son for no reason, and another weird Dad who feeds his son with a vague concoction so he grows tall and strong. Ludicrous, perhaps, is the right word here.

Throughout, the film - no 'a bunch of celluloid roles' would be a better description - seeks the help of toilet humor to get by. Every sentence is loaded with sexual innuendos (and in real bad taste) and every scene with semi-naked women, and every line is packed with raunchy words.

No self-respecting actor or actress would ever want to be associated with a movie like this. So mentioning the names of the cast would be doing disservice to them. But just to give you an idea, the cast is just a few clowns short of a circus.

There are about five duets (the dumb guy and the dumber gal) and each one with a different theme and special them (phew!) In one 'happy' song, the two are dressed as astronauts, in another they are wrapped in gauze and bandages. In one sad song, they have green tears. Ok now, stop laughing. It wasn't just funny while I was watching it.

It will take us another 10 good films for viewers to recover from horrendous fare like this one. Hmmm, that means you have to wait a lifetime to get over Ammayilu Abbayilu.
Share. Save. Connect.
Tweet
AMMAYILU ABBAYILU SNAPSHOT
See Ammayilu Abbayilu full details
AMMAYILU ABBAYILU USER REVIEWS
1 - 2 OF 2 COMMENTS
POSITIVE  |  NEGATIVE |  NEWEST  |  OLDEST  |  MOST HELPFUL  |  LEAST HELPFUL
USER RATING
5.0
81 USERS
Performances
Script
Music/Soundtrack
Visuals
NA
NA
NA
NA
Can watch again - NA
Good for kids - NA
Good for dates - NA
Wait to rent it - NA
IMAGhost on 5th Jul 2018, 7:26pm | Permalink
I don't see why this film was rated so poorly. I know this film is weird but its funny! And sometimes weird is good because it is not boring. I think they were trying to adopt this idea of a typical American teen movie. Just take a look at the setting of the houses, the school, the school buses, and Halloween parties. I think it was interesting to see those aspects of the film. I know it does not have our nativity but how many movies have we seen like that? ALOT Sure some of the actors need some work on their acting but I think the film is decent. Lastly, songs were good, especially Nijam Cheppamante.
RATING
7
Amrutash Misra on 23rd Jun 2007, 11:51am | Permalink
Superb film !
RATING
10
LEAVE A COMMENT
fullhyd.com has 700,000+ monthly visits. Tell Hyderabad what you feel about Ammayilu Abbayilu!
MORE MOVIES
Latest Reviews
83
83 - Telugu
Shyam Singha Roy
The Matrix Resurrections - H...
The Matrix Resurrections
more
Pushpa: The Rise - Hindi
Pushpa: The Rise
Spider-Man: No Way Home
Spider-Man: No Way Home - Hi...
Spider-Man: No Way Home - Te...
Chandigarh Kare Aashiqui
Akhanda
Satyameva Jayate 2
Ghostbusters: Afterlife
Eternals (Telugu)
Contemporary Reviews
Hawa
Out Of Control
Once Upon A Time In Mexico
Ninne Premista
Oka Raju Oka Rani
more
Mujhse Dosti Karoge
Jai Santoshi Maa
Ishq Vishq
Khiladi 420
Maa Santoshi Maa
Supari
The Blue Lagoon (Hindi)
Wah..! Tera Kya Kehna
Kingdom Of Heaven
Random Reviews
Kalisi Naduddam
Van Helsing
Jayam
Darling
Gadar
more
Ride
Brahmalokam To Yamalokam Via...
Final Destination 5 (Telugu)
Ice Age 4: Continental Drift...
Adda
Humshakals
Guddu Rangeela
Shatamanam Bhavati
Abhimanyudu
Dabangg 3
SEARCH MOVIES
Dissatisfied with the results? Report a problem or error, or add a listing.
ADVERTISEMENT
SHOUTBOX!
{{todo.name}}
{{todo.date}}
[
ip{{todo.ip}}
]
{{ todo.summary }}... expand »
{{ todo.text }} « collapse
First  |  Prev  |   1   2  3  {{current_page-1}}  {{current_page}}  {{current_page+1}}  {{last_page-2}}  {{last_page-1}}  {{last_page}}   |  Next  |  Last
{{todos[0].name}}

ADVERTISEMENT
This page was tagged for
nijamcheppamantesongs
ammailu abbailu movie review
Ammayilu abbayilu film
sex chesukune tappudu ammayilu abbayilu akkada muddulu pettali in telugu
Telugu ammayalu romance and sex
Follow @fullhyderabad
Follow fullhyd.com on
About Hyderabad
The Hyderabad Community
Improve fullhyd.com
More
Our Other Local Guides
Our other sites
© Copyright 1999-2009 LRR Technologies (Hyderabad), Pvt Ltd. All rights reserved. fullhyd, fullhyderabad, Welcome To The Neighbourhood are trademarks of LRR Technologies (Hyderabad) Pvt Ltd. The textual, graphic, audio and audiovisual material in this site is protected by copyright law. You may not copy, distribute, or use this material except as necessary for your personal, non-commercial use. Any trademarks are the properties of their respective owners. More on Hyderabad, India. Jobs in Hyderabad.