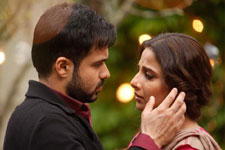 Zehra Abbas / fullhyd.com
EDITOR RATING
4.0
Performances
Script
Music/Soundtrack
Visuals
7.0
4.0
6.5
6.5
Suggestions
Can watch again
No
Good for kids
No
Good for dates
No
Wait to rent it
Yes
Think of tragic love stories and the elements that make them memorable - noble characters, stirring chemistry, powerful obstacles, and a heartbreaking climax and catharsis. Now, watch Hamari Adhuri Kahani as a lesson in how even the perfect formula cannot save mediocre filmmaking. Mohit Suri and Mahesh Bhatt, the director and writer respectively, must take joint custody of a film that the audience will most likely disown because they got everything right on paper, but everything wrong on-screen.

Let's take it one at a time.

Noble characters: Vasudha Prasad (Vidya Balan) is a single mother, struggling to raise her young son in big, bad Mumbai following her husband's unexplained disappearance 5 years ago. She's a florist in a hotel but that doesn't mean she can't rescue a hotel magnate from a burning building (or, at least try to). Said hotel magnate, Aarav Ruparel (Emraan Hashmi), is inexplicably drawn to the dour- and pained-looking (every frame, every "blooming" frame) florist.

She's the type who waxes eloquent about how she hates to pluck flowers (though later she uproots an entire flowering bush and walks off with it), and he's the type who stops his car in a Naxal-infested area because of a "khushboo" and goes running into a field of lilies. A match made in heaven.

Aarav's and Vasudha's feelings for each other are mutual, and they fall passionately in love. Fate cackles somewhere in the background, and the missing husband, Hari (Rajkummar Rao), supposedly a terrorist, returns home.

So far, so good? Not really. All thanks to the dialogues by Shagufta Rafique, which belong in an alternative universe where not just your nachos, but life itself is nauseatingly cheesy. The lines don't allow you to believe in Aarav's and Vasudha's characters because people don't talk like that, period. At one point, Vasudha tells Aarav that she is someone else's "milqiyat". Yeah, try googling that one. Here's another gem, mouthed by the head of the Mumbai Crime Branch of all people: "Kyunki yeh kayanat bhi sachche prem karne walo ki madad karti hain". Theatres should consider emulating the airline industry, and provide barf bags for each seat.

Obviously, this impacts your connection with the characters, and then the trite plotting makes matters worse. The very ignoble Hari plays on Vasudha's hamartia or tragic flaw - yes, you guessed it, her nobility - and guilts her into taking him back. Aarav proves that he is Vasudha's true match by helping to prove Hari's innocence, and you start to wonder if the couple's tragic flaw isn't nobility, but stupidity.

Stirring chemistry: Vidya Balan and Emraan Hashmi bring an intriguing chemistry to the screen, and it's always interesting to see them pair up. Both actors deserve praise for doing their best with very limited support from the writer and director. Hashmi is definitely well within his comfort zone, but in some scenes shows flashes of real talent, that has sadly been b(h)attered by his association with Vishesh Films. By sheer force of talent, Vidya Balan manages to deliver some moving scenes as well, but that isn't enough to distract you from wondering about her recent career choices - why, Vidya, why?

Surprisingly enough, the simmering attraction between the lead pair isn't consummated by the Hashmi Kiss, and the one lovemaking scene in the film is so prudishly handled that they might as well have used the 60s standard symbol - two flowers nuzzling each other in the wind.

However, the biggest problem with this love story is that a gloominess hangs over the lead pair from start to finish. Copious, and we mean copious, amounts of glycerine has been used in the film, and the whole eyes swimming with tears and eyes streaming with tears routine gets on your nerves after a while. Vidya Balan doesn't use her hanky in this film - she uses a scarf.

The music attempts to seduce you into a romantic mood, but apart from the title track composed by Jeet Ganguly, and sung beautifully by Arijit Singh, the songs fail to make an impact.

The cinematography also tries to create a romantic backdrop, but some of the most beautiful visuals are also quite funny. There is scene after scene at the florist's, in a garden, in a greenhouse, and we assume that the cinematographer threw a tantrum about that, because you are then treated to lovely visuals of the arid desert in Dubai. Funnily, your enjoyment is marred by Vasudha either running away from Aarav into a sandstorm (literally!), or running again, but this time in slow motion, into his arms.

Powerful obstacles: The makers attempt to explore the idea of obstacles within and without. Hari is the obvious obstacle to Vasudha's and Aarav's love, but the bigger obstacle is Vasudha's own ethical dilemma. She is trapped by generations of conditioning - how do you rebel against bogus social mores if you believe in them yourself?

It's a wonderful premise, and one of the main themes of the film, but the writing lets down the actors here as well. It's hard to sympathize with Vasudha because when she ultimately takes the decision that common sense dictates, it seems like too little, too late, and her newfound empowerment is weighed down by unremitting tragedy.

Rajkummar Rao's performance as Hari makes for far more interesting viewing. He is scary and believable as the mercurial, manipulative and vindictive husband who behaves with a frightening sense of entitlement.

Heartbreaking climax and catharsis: Without giving too much away, let's acknowledge that the climax of the film is not just visually beautiful, but also emotionally moving. A recurring theme, possession versus letting go, finds a satisfactory resolution here as does the Krishna-Radha motif that runs through the movie. Even in isolation, the climax is moving because it touches on universal ideas like karmic redemption. Unfortunately, its effectiveness is diluted by the fact that the rest of the film doesn't maintain the pitch that could justify such a powerful crescendo and make it a truly satisfying, and cathartic, moment for the audience.

Hamari Adhuri Kahani remains as colourless as the all-white room in which Vasudha's son finishes reading her story at the end of the film. It's a tragedy.
Share. Save. Connect.
Tweet
HAMARI ADHURI KAHANI SNAPSHOT 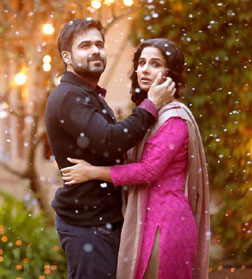 ADVERTISEMENT
This page was tagged for
Hamari Adhuri Kahani hindi movie
Hamari Adhuri Kahani reviews
release date
Emraan Hashmi, Vidya Balan
theatres list
Follow @fullhyderabad
Follow fullhyd.com on
About Hyderabad
The Hyderabad Community
Improve fullhyd.com
More
Our Other Local Guides
Our other sites
© Copyright 1999-2009 LRR Technologies (Hyderabad), Pvt Ltd. All rights reserved. fullhyd, fullhyderabad, Welcome To The Neighbourhood are trademarks of LRR Technologies (Hyderabad) Pvt Ltd. The textual, graphic, audio and audiovisual material in this site is protected by copyright law. You may not copy, distribute, or use this material except as necessary for your personal, non-commercial use. Any trademarks are the properties of their respective owners. More on Hyderabad, India. Jobs in Hyderabad.