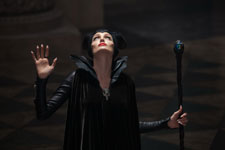 Nupur Barua / fullhyd.com
EDITOR RATING
5.0
Performances
Script
Music/Soundtrack
Visuals
6.0
4.0
5.0
6.0
Suggestions
Can watch again
No
Good for kids
Yes
Good for dates
Yes
Wait for OTT
No
In 1959, Disney introduced us to the leader of all villains of the Disney World - Maleficent - in the movie Sleeping Beauty. She is magnificent, to say the least, and her name is often confused with the adjective. She has horns that grow impressively from her head, lips that are ruby red, and gaunt cheekbones. She is evil personified, and has made many an appearance in other works of fiction over the years. This weekend, we are reminded of her existence again with Maleficent, a movie starring Angelina Jolie.

Once upon a time, long ago, there were two neighbouring kingdoms wary of each other. In one, there is a power-hungry king who has made his subjects miserable, so they concentrate on resenting their neighbours instead. Those neighbours are not human - they live in the kingdom named The Moors, and they are happy in their diversity of species - from faeries to tree people to other magical creatures. It is a happy land, and in this land dwells a young girl named Maleficent (Ella Purnell).

Actually, Maleficent is not really a human girl. She is a faerie, and she has powerful wings that allow her to fly high above the clouds. One day, when a human boy wanders into The Moors, Maleficent decides to control the outcome by calming down the border guards, and by escorting Stefan (Toby Regbo), the young boy, back to the edge of the forest. They strike up a friendship, which soon blossoms into young love, and it is sealed with the kiss of true love.

Many years later, Stefan (Sharlto Copley) is working as the king's personal valet in the castle. The pursuit of his ambitions has created a distance between the two lovers. The grown Maleficent (Angelina Jolie) has become the guardian of The Moors, and she easily defeats the arrogant King Henry (Kenneth Cranham) when he tries to invade her lands.

The injured and proud Henry announces that he will hand over his kingdom and daughter to the person who can vanquish Maleficent. Stefan sees his chance, and goes to meet with Maleficent on the pretext of warning her. When she falls into a heavy sleep, thanks to his potion, he cuts off her wings, presents them to Henry, and becomes the king.

Maleficent cannot get over this betrayal, and recruits a shapeshifting raven, Diaval (Sam Diley), to become her spy. She hears that the kingdom is celebrating the birth of the king's newborn daughter, and she makes an appearance at the christening ceremony. There, she curses the baby to a deep sleep on her 16th birthday, which only true love's kiss can dispel (her taunt to the one she believed was her true love - Stefan), and disappears.

Stefan hands over his daughter to the 3 good faeries in an effort to keep her safe, and then becomes obsessive about destroying Maleficent. Maleficent, in the meantime, keeps a watch on the cottage where the princess is growing up. Despite herself, she feels a pull towards the child, but keeps a distance. When Princess Aurora (Elle Fanning) is about to turn 16, she (Aurora) strikes up a relationship with the reluctant Maleficent, winning her over enough to want to revoke the curse. However, once uttered, the curse will run its natural course.

Taking a detour from the story of Sleeping Beauty, Maleficent is an attempt to portray the wicked villain's side of the story, and to justify her actions. She is both a hero and a villain, and this deliberate grey shade only enhances her reputation. The screenplay inserts famous elements from the original French story - the 3 faeries, the curse, the forest of thrones, the raven, the dragon, the spindle, the spell and the cottage, amongst others. Even the dialogues are heavily inspired by the 1959 movie - in fact, Maleficent's entry into the court sees her quoting verbatim from Sleeping Beauty.

With a "feminist twist" to the story, the plot points become slightly dull and jaded. Once it is established that Maleficent has no reason to harm the princess, the rest of the sequences between then and the climax are more like fillers, because a movie has to be of a certain length. The stakes are not so high, except maybe for Maleficent herself. Aurora has absolutely no threat to her life, and the handsome prince on a horse is redundant then. It is no longer a fairy/folk tale, nor does it emphasise the triumph of good over evil in the literal sense. The script is more concerned with the evolution of Maleficent's character, thus making the other people and creatures rather flat characters in comparison.

The humour, very important in a Disney film, comes only from the 3 bumbling faeries, and they are so ditzy that one wonders why the king entrusted his sole heir to their care. They do not protect the princess much, and only concentrate on making fools of themselves. The dialogues are rather stilted, and even the progress of the story seems jarred. However, if you take into consideration the fact that integral characters of the movie were chopped out of the movie for the final cut, you can understand why the narrative is so disjointed. The twist in the end is almost predicable.

With the movie shot in England, the production design is too convoluted to be taken seriously. The fantastical world is done up with what seems to be indifference, lending no gravity to the believability of the script. Maleficent's costume is the only one that deserves a mention, because of the sheer beauty of it. There are a few costume jump cuts, especially during the action sequences.

The cinematography is nothing to write home about. It does try to do justice to the sweeping fields and the dark forests, but the computer graphics spoil the show. In fact, the 3D is quite unnecessary, except as a gimmick. Some of the sequences, such as Maleficent soaring to the skies, could have been goose-bump-inducing, but fall short of expectations. There is nothing new in the visuals.

The music is pretty standard, too. As for the editing, the indiscriminate chopping out of sequences that were already shot prevents the movie from flowing comfortably. Also, since there is not much that is happening in the script, the movie seems never-ending.

Angelina Jolie is the only reason to watch Maleficent. She does not seem like a very innocent faerie, but when she turns evil, she can send shivers down your spine. Her inherent "Hmmm/Hmpf" utterances only accentuate the character. As for the others, they cannot be faulted for the rather staid characters that they play. Sam Diley deserves a mention as Maleficent's confidant, but even he looks confusing. As for the ethereal Elle Fanning, she tries too hard to be sugar and spice and all things nice, and can become quite annoying. The only other actor who shows some passion for his role is Kenneth Cranham.

If you are a die-hard fan of fairy tales, then this movie is not for you. Unless you are a bigger fan of Angelina Jolie, of course. The monotonous story can question your nerves of steel, if any. A weaker person will probably faint in sheer exhaustion at the lack of a flowing narrative. Of course, as with most Young Adult Literature these days, a retelling of a popular folk tale is always welcome, but be prepared to be bored.
Share. Save. Connect.
Tweet
MALEFICENT (3D) SNAPSHOT 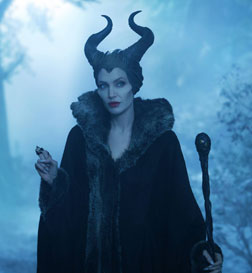 ADVERTISEMENT
This page was tagged for
Maleficent (3D) english movie
Maleficent (3D) reviews
release date
Angelina Jolie, Ella Purnell
theatres list
Follow @fullhyderabad
Follow fullhyd.com on
About Hyderabad
The Hyderabad Community
Improve fullhyd.com
More
Our Other Local Guides
Our other sites
© Copyright 1999-2009 LRR Technologies (Hyderabad), Pvt Ltd. All rights reserved. fullhyd, fullhyderabad, Welcome To The Neighbourhood are trademarks of LRR Technologies (Hyderabad) Pvt Ltd. The textual, graphic, audio and audiovisual material in this site is protected by copyright law. You may not copy, distribute, or use this material except as necessary for your personal, non-commercial use. Any trademarks are the properties of their respective owners. More on Hyderabad, India. Jobs in Hyderabad.