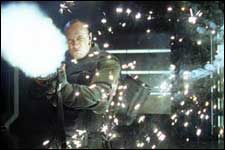 Priyanka Pulla / fullhyd.com
EDITOR RATING
6.0
Performances
Script
Music/Soundtrack
Visuals
NA
NA
NA
NA
Suggestions
Can watch again
NA
Good for kids
NA
Good for dates
NA
Wait for OTT
NA
For those who spent the best years of their life hunched up on a computer chair and banging at the Ctrl button to catch that strawberry burst of blood they were conditioned to rejoice in, for those who jigged in their seats listening to the heavy-metal track transport them to the onscreen planet of supreme evil, Doom arrives like the resurrection of Christ for the believers. The sinners can go to hell!

That’s right, the unbelievers won’t feel too much at home here – Doom is incoherent, has no story, and has just a precious handful of minutes of first-person perspective. Moreover, it’s easy to miss the action and the fancy-weapon names in the gloomy blur of the movie – the very ingredients that give you the buzz and the kick. Even the game-players will share that beef. Without its redeeming similarities to the game, Doom is after all a trashy version of Aliens.

Marines land up on a Martian facility to recover archaeological data, only to discover that some diabolical experiments are being conducted that convert humans into superhumans or monsters. Depending, of-course, on their genetic make-up and predisposition. The last 10% of the human genome is not yet decoded and it’s widely believed that it is the blue-print for the human soul...yadda yadda yadda and a bale of bandying about of pseudo-scientific gobbledygook later, we have a plot as tight as Schwarzenegger’s derriere in the Terminator.

Or the Rock’s. The Rock plays Sarge here, leader of the herd of hulking beefcakes sporting massive, boxy blasters which are a pleasure to watch when fired. Now I don’t know what their default weapons are called, but don’t blame me, go seek it out in the game instead.

There is a goose-bump inspiring scene where Sarge announces that ‘We’re gonna need something with a little bit more kick’ and fetches an even bigger peashooter that blows the whole of the ugly, slimy, mutant monstrosity in one neon-blue blaze. Doom lovers will watch the movie for scenes like these.

Then there are ST Grenades which burst with a beautiful, fluid light and like the big bombs in the game, can be depended on to really clear the ground. What is disappointing is that John Grimm, the hero, gets his super-human powers only after 19/20th of the movie is over. He is almost dying when his sister injects him with the 24th chromosome, the superhumanity potion. Suddenly his wounds heal, and for 10 delightful minutes, the flick shifts to first person perspective.

John moves from room to room searching for Sam, his sister, and it is absolutely trippy to watch the computer console scenes come alive on the giant acreen. There are the same ‘restricted entry’ gates that slide open, the monsters that fall dead with a violent jerk when shot, the unceasing shooting that makes you feel so invincible.

The final showdown is the good vs evil fight between John and Sarge, who are now both God and the Satan, no less. That is good fun too, but one wonders if a first person perspective would have added that missing pow here as well.

A must watch for the all those who love the game although it is probably a foregone conclusion that most will be disappointed. There is no denying though, that in every moment that the movie steals unabridged from the game, there is that touch of pure exaltation.
Share. Save. Connect.
Tweet
DOOM SNAPSHOT

ADVERTISEMENT
This page was tagged for
Doom english movie
Doom reviews
release date
The Rock, Karl Urban
theatres list
Follow @fullhyderabad
Follow fullhyd.com on
About Hyderabad
The Hyderabad Community
Improve fullhyd.com
More
Our Other Local Guides
Our other sites
© Copyright 1999-2009 LRR Technologies (Hyderabad), Pvt Ltd. All rights reserved. fullhyd, fullhyderabad, Welcome To The Neighbourhood are trademarks of LRR Technologies (Hyderabad) Pvt Ltd. The textual, graphic, audio and audiovisual material in this site is protected by copyright law. You may not copy, distribute, or use this material except as necessary for your personal, non-commercial use. Any trademarks are the properties of their respective owners. More on Hyderabad, India. Jobs in Hyderabad.