What's The Worst That Could Happen? Review 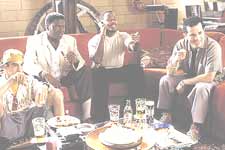 Smriti Kashyap / fullhyd.com
EDITOR RATING
5.0
Performances
Script
Music/Soundtrack
Visuals
NA
NA
NA
NA
Suggestions
Can watch again
NA
Good for kids
NA
Good for dates
NA
Wait to rent it
NA
With a title such as that, you can only let your already overactive imagination zoom into hyperdrive at Mach 5 and quip happily, "I could get hives, be stung by an overenthusiastic bee, break a hair or plain suffer through the two hours of agony." Well, that's the worse that could happen if you are watching this flick. Counting the number of crows that fly past your house would probably be more interesting.

If you saw the absolutely fab Steve Martin and James Caan comic caper "Dirty Rotten Scoundrels", then you should probably stay far away from this flick, 'coz it tries hard to come up with the same kind of comedy but falls flat on its face. What's the... is the usual criminal vs. corporate scoundrel caper where each one is trying to beat the other at his own game. Yaaaaawwwn.

Kevin Caffrey (Martin Lawrence) is a crook, and what's worse, he's a crook who's in love with a chick called Amber. Goaded into doing what he does best, Caffrey, with a pal, decides on a midnight heist to burgle the evil media mogul, imperialistic white-collar crook and troll, Max Fairbanks (Danny De Vito). But Max catches Caffrey red handed and yells for the cops.

Just when the cops begin wheeling Kevin away, Max as a singularly cheap shot claims that the ring on Kevin's finger is his, and grabs it. Now this ring has a history of its own. Kevin's girlfriend has given it to him as a token of their love. More yaaawwwn. Kevin has lava flowing in his veins for the cheap shot pulled off by Max, and vows to get it back.

And thus, ladies and gentlemen, the princely sport of one-upmanship begins, with each guy trying to go back and forth in trying to get the rotten ring. Kevin tries everything, from breaking back into Max's condo to gate crashing into a banquet and trying every downright dirty trick in the book, to get back his charmed ring.

The whole movie is weird and somewhat uneven in its script. There are some funny comedic shticks and some pretty daft gimmicks, but the film pants to dole them out, with the script stretching way too far to accommodate them and trying to BS its way to a conclusion.

Martin Lawrence is all right as he pulls off a few stunts and Danny De Vito is perfectly cast as the materialistic slime ball. But that doesn't prevent the flick from being as inspiring as a bottle of antacid. The movie is all right if you are looking for some matinee mirth, but I wouldn't advise you to put all your scope for happiness in this caper. Look around a bit and head for the theater only if it has iron filling in its walls and you are stuck with a magnet in your mouth.
Share. Save. Connect.
Tweet
WHAT'S THE WORST THAT... SNAPSHOT
WHAT'S THE WORST THAT COULD HAPPEN? SNAPSHOT

ADVERTISEMENT
This page was tagged for
What's The Worst That Could Happen? english movie
What's The Worst That Could Happen? reviews
release date
Martin Lawrence, Danny Devito
theatres list
Follow @fullhyderabad
Follow fullhyd.com on
About Hyderabad
The Hyderabad Community
Improve fullhyd.com
More
Our Other Local Guides
Our other sites
© Copyright 1999-2009 LRR Technologies (Hyderabad), Pvt Ltd. All rights reserved. fullhyd, fullhyderabad, Welcome To The Neighbourhood are trademarks of LRR Technologies (Hyderabad) Pvt Ltd. The textual, graphic, audio and audiovisual material in this site is protected by copyright law. You may not copy, distribute, or use this material except as necessary for your personal, non-commercial use. Any trademarks are the properties of their respective owners. More on Hyderabad, India. Jobs in Hyderabad.