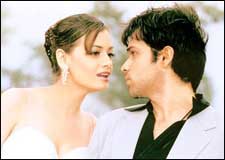 Deepa Menon / fullhyd.com
EDITOR RATING
3.0
Performances
Script
Music/Soundtrack
Visuals
NA
NA
NA
NA
Suggestions
Can watch again
NA
Good for kids
NA
Good for dates
NA
Wait for OTT
NA
Love-stories are a dime a dozen. But even at that price Tumsa Nahin Dekha is a total rip-off. It carefully patches together plots, scenes, and kisses from various English movies and hopes you won't notice. Sadly, you won't even notice the much-publicized mouth-to-mouth action. It'll take more than that to resuscitate this film.

Daksh (Emraan Why Me? Hashmi) is a rich brat who is neglected by his father and brought up by his doting butler, John Uncle (Anupam Kher). John Uncle lovingly tends to Daksh's liquor-induced ravings, and makes sure the bail-money is always at hand. You see, this rich kid is so impulsive and such an ickle imp that he often gets into trouble with the cops. Aww, isn't he darling, the sozzled freak?

On one of these 'impulsive' turns, Daksh spots Jia (Dia Bordering On Hysteria Mirza) as she stands in a busstop. Steeling himself for what he hopes will get at least three more people into the theater, Daksh walks over to her and glues himself to her lips for many a shocked second. She struggles ineffectually waiting for the director to yell, Cut! Finally they're wrenched apart by helpful navy-men, who were fortunately waiting around in full costume for just such an eventuality.

Daksh falls in love, so the next time he meets Jia he makes sure she doesn't get away. She agrees to spend an hour with him, for 3,000 bucks, but on the condition that he can't touch her or misbehave in anyway. No issues. Because even though she dances in a bar, Daksh loves Jia not for her body but for her mind. Her charm. Her resilience. Her ability to make bats fall out of trees with just one well-aimed shriek (of which there are many).

Jia, for her part, falls right back in love with Daksh, especially when she sees how devoted he is to her mentally-challenged brother. In fact, everything is lovely and just as fine as can be when suddenly, his evil father issues an ultimatum: marry my friend's daughter or be divorced forever from your million-dollar bank account.

Like many of us, Daksh is not enthusiastic about the idea of imminent poverty. So he tells Jia he can't go through with their relationship, he is far too rich for the likes of her. Instead, would she be willing to be his mistress? Jia does what any respectable girl in her position would do, she tells him she'll think it over.

And the one who talks Jia into considering the proposal is John Uncle, who develops 'acute' leukemia (not to be confused with other less-serious forms of blood cancer). John Uncle kicks it, and faced with his own mortality, Daksh finally sees the error of his ways. He stands up to his devious father and his hookah-puffing, trash-mouth of a grandmother, and in the end love triumphs. To seal the deal, the two lovers kiss again. And this is definitely a better kiss, because they're both more relaxed. They've finally gotten Tumsa Nahin Dekha safely behind them. And as silver linings go, that one is nothing to scoff at.

ADVERTISEMENT
This page was tagged for
Tumsa Nahin Dekha hindi movie
Tumsa Nahin Dekha reviews
release date
Emraan Hashmi, Dia Mirza
theatres list
Follow @fullhyderabad
Follow fullhyd.com on
About Hyderabad
The Hyderabad Community
Improve fullhyd.com
More
Our Other Local Guides
Our other sites
© Copyright 1999-2009 LRR Technologies (Hyderabad), Pvt Ltd. All rights reserved. fullhyd, fullhyderabad, Welcome To The Neighbourhood are trademarks of LRR Technologies (Hyderabad) Pvt Ltd. The textual, graphic, audio and audiovisual material in this site is protected by copyright law. You may not copy, distribute, or use this material except as necessary for your personal, non-commercial use. Any trademarks are the properties of their respective owners. More on Hyderabad, India. Jobs in Hyderabad.