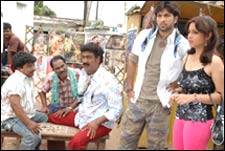 Krishna KBS / fullhyd.com
EDITOR RATING
1.0
Performances
Script
Music/Soundtrack
Visuals
NA
NA
NA
NA
Suggestions
Can watch again
NA
Good for kids
NA
Good for dates
NA
Wait to rent it
NA
Someone once said that when sense goes for a toss, even the coin is hard to get.

Filmmakers in the hope of making a fast buck set their eyes on mass movies. Their argument (which happens to be not only convoluted but also confused) is that mass films cater to the audiences who turn up on a regular basis at the theaters, and hence their support is all that matters. Even assuming the line of reasoning is correct, there is the small issue of how well the film is made.

Before we go into that aspect of Savaal, let us get the plot out of the way. Savaal is the story of Tirupati (Bharath), a seller of 'black tickets'. In the tradition of mass films, he is an orphan, has a golden heart, and has his own set of ideologies and ideals. Due to his knack of helping people in distress, he does a favor to the police officer Narasimham (Shayaji Shinde). Narasimham is impressed with the lad, and makes him a police informer.

Due to Tirupati's help, the shayari-spouting officer becomes famous. However, most of the information that he gives the officer is about the various corrupt practices of the local minister, and soon, we have a full-fledged insufferable villain on our hands.

Meanwhile, the officer and Tirupati become drinking cohorts, and in an inebriated state the hero is challenged by the other to get his daughter to fall in love with him. I wonder if this ever happens in real life; but in reel life, these kind of challenges are dime a dozen.

As a self-respecting hero of a mass movie, our hero takes up the challenge. And the rest of the film is about how the bad guys are taught a lesson, and how the hero goes about winning the drunken "savaal".

Savaal has all the ingredients of a mass flick - or rather, to put it more correctly, what B-list directors think go into the making of a mass masala film. Corruption in high places, an orphan hero who is into petty crime but who is God-fearing, an obnoxious villain who makes Mogambo and Gabbar Singh look like school bullies, a heroine who is ready to shed her clothes, music with fast beats, cliched dialogues uttered with clenched teeth and jaws (and are supposed to be scary threats), and even Mumaith Khan in an item number.

However, where Jaya misses out is that such films also need a known and identifiable lead pair. Bharath, for all his acting prowess, still looks like he has just come out of school. As so does the heroine, who looks overawed at the situation she finds herself in - though thankfully she doesn't forget her lines (of course, having a dubbing artist also helps). As for the others, they act reasonably well. Jassie Gift makes a comeback after Yuvasena, and he still mistakenly assumes that grating vocals make great music.

Overall, Savaal has the feel of a school play. Only, it seems to be made for those who have never been to school.
Share. Save. Connect.
Tweet
SAWAAL SNAPSHOT

ADVERTISEMENT
This page was tagged for
Sawaal telugu movie
Sawaal reviews
release date
Bharath, Suhani
theatres list
Follow @fullhyderabad
Follow fullhyd.com on
About Hyderabad
The Hyderabad Community
Improve fullhyd.com
More
Our Other Local Guides
Our other sites
© Copyright 1999-2009 LRR Technologies (Hyderabad), Pvt Ltd. All rights reserved. fullhyd, fullhyderabad, Welcome To The Neighbourhood are trademarks of LRR Technologies (Hyderabad) Pvt Ltd. The textual, graphic, audio and audiovisual material in this site is protected by copyright law. You may not copy, distribute, or use this material except as necessary for your personal, non-commercial use. Any trademarks are the properties of their respective owners. More on Hyderabad, India. Jobs in Hyderabad.