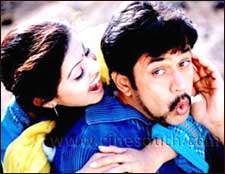 EDITOR RATING
5.0
Performances
Script
Music/Soundtrack
Visuals
NA
NA
NA
NA
Suggestions
Can watch again
NA
Good for kids
NA
Good for dates
NA
Wait to rent it
NA
Koti (Arjun) is a brutal murderer. This is because his mother died when he was just 6 months old, and then his teacher died when he was 4 years old. He decides that he's not going to watch helplessly any more as people around him die, and so starts killing them himself. If Sigmund Freud had heard this script, he'd have killed himself when he was 6 years old.

Anyway, one day Koti is killing someone on his way to work, when he is seen by Gayatri (Sneha), who is repulsed by his ruthless savagery, his nauseating thirst for blood, and his horrendous dubbing. She decides that she can't marry him, and is almost about to tell him that, when she realizes that he doesn't even know who she is. To remedy this situation, she makes his acquaintance, and one thing leads to another, and soon you're bored.

Anyway, what happens is that she realizes that if seen in the proper way, he is actually a good man. Well, the proper way to see him as a good man is to pay him to be good to you, but she still decides that there's a hidden human in everyone. Only, you'd need an earth-mover and a 10-year business plan to find him in Koti. But never one to get daunted by a challenge or refuse a clichéd script, she gamely takes him on.

Koti is first irritated and then confused, and thereby runs out of his gamut of emotions. Deciding that anything else he feels must be love, he professes it to her. He shows this by chopping off the head of his mentor Varahala Rao (Jayaprakash Reddy) for her, and clapping in joy and doing a war-dance. Gayatri is taken aback, since if he has to do this every time he feels like expressing his love for her, they'd have to stay in a highly-populated area, and we all know how the rents are soaring in urban areas these days. So she decides to do the next best thing - no, not put him on Narendra Modi's speed-dial, but testify against him in court for the gruesome murder.

Koti is released in just 4 years (things apparently happen much faster in India these days, with all the liberalization and globalization), and comes back to stalk Gayatri, who is now married to an engineer Rakesh. He signs up as the security guard for their own house, since they really do need a good security guard now. He tries to tell Gayatri that as a special case he is willing to marry her for a limited period. And when this does not work, the killings start, as he becomes unstoppable, just like the movie.

You wouldn't go and watch Koti, of course - it's one of those movies that are made so that they can be reviewed. The film is poorly-scripted, which is surprising since you thought people had screwed this genre up in every possible way. The characterization of the protagonist reminds you of a man who went for a shave and never returned - just like he's not there anymore, the characterization too is non-existent. Okay, remember, we just watched this film.

Arjun is as good as the ill-crafted role will allow him to be, and Sneha passes muster, too - as do all other performers, actually. There's not much by way of visuals, though an opening sequence of a train to Rameswaram on a cantilever bridge over a river is interesting. The music isn't something that you'll find stocked in stores and all - you'll have to place a special order with the producer and hope he'll recover from the shock. However, the opening item number featuring Kiran is surprisingly hummable.

At the end of the day, remember, time heals everything, and some day you'll forget all about this review.

ADVERTISEMENT
This page was tagged for
koti telugu movie list
koti movie
Telugu Koti MOVIES
Koti telugu movie
Koti reviews
Follow @fullhyderabad
Follow fullhyd.com on
About Hyderabad
The Hyderabad Community
Improve fullhyd.com
More
Our Other Local Guides
Our other sites
© Copyright 1999-2009 LRR Technologies (Hyderabad), Pvt Ltd. All rights reserved. fullhyd, fullhyderabad, Welcome To The Neighbourhood are trademarks of LRR Technologies (Hyderabad) Pvt Ltd. The textual, graphic, audio and audiovisual material in this site is protected by copyright law. You may not copy, distribute, or use this material except as necessary for your personal, non-commercial use. Any trademarks are the properties of their respective owners. More on Hyderabad, India. Jobs in Hyderabad.