Shah Rukh Khan was first choice for the lead role in this film. Thank God that didn't work out. This movie belongs entirely to Dutt, his loony grin, killer bod and paan-stained colloquialism. He is Mumbai at its most irreverent, trash-mouthed and irrepressible.

Munna Bhai (our man with the biceps) comes to the big city with his ma ka aashirwaad and VIP baniyaan, to become a doctor. But he finds the underworld a more lucrative playing field (of course, not all doctors would agree). So his parents are back home proud of their son who runs a charity hospital, while the truth actually is that the son is single-handedly providing enough business for all the hospitals in his ilaaka. Oh well, things don't always turn out as we plan. 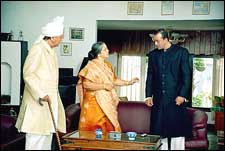 Bhai's dad (played by real life dad Sunil Dutt, who exudes a quiet dignity much like the Big B) comes a-visiting to the city to watch his son do his noble work. Unfortunately, he is not impressed with the hafta king and his mile-long police record, not to mention his complete lack of any medical powers, so he does the absolute worst lowdown thing any dad in a Hindi movie could do - he takes off his pagadi and cries. This produces the desired result, and our hero feels like the scummiest scum in scumland.

So Munna Bhai decides to become a doctor, in a fit of extreme guilt, righteousness, and it must be said, some horniness (he's hoping to get hitched to his father's friend's daughter who is also a doctor). After passing his entrance exam with a great score he goes off to study docotor-ing at a very prestigious and high-profile college (named IIMS, by some complete coincidence, I'm sure).

Assisted by his cronies, prime amongst whom is Circuit played superbly by Arshad Warsi, Munna Bhai turns over a new leaf and settles down to college life. Yes, and wouldn't that make for a thumping blockbuster? Perhaps it would, but that's not what this film's about.

His Tapori-ness doesn't tone it down a shade at medical school, it only notches it up a couple. He brings his own cadaver to anatomy class, hugs everyone in sight, sings and dances in the emergency ward, and spews compassion much like the desi Patch Adams he's undoubtedly trying to be. 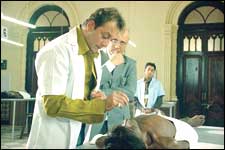 The daughter (a mildly irritating Gracy Singh who insists on smiling for no apparent reason) seems to think of Munna Bhai as an affable fool, till he saves a couple of lives. Then after the mandatory song with the pigeons and chiffon dupatta flying, she falls for him like a ton of bricks.

And so does everybody in the college and its hospital. So when the dean finally manages to prove that he's been cheating on his exams, nobody believes him, and Munna Bhai is tried in a public court. Of course, the heroine makes an impassioned speech laced with sarcasm for her dad; of course, the paralysed man in a wheelchair for 12 years regains use of his limbs; and of course, Munna Bhai is vindicated.

There's not much that's original in the script, but this isn't really a crime in Bollywood. The movie is still a barrel of laughs - it's humor might surprise you. The characters are well-sketched, and the camera work is neat. And the songs are also quite hummable.


Especially if you are from Mumbai, then this movie is immensly enjoyable, because of the Mumbaiya language used. Actually this is what gives this movie an edge.


The role of Munnabhai is carefully crafted, and only Sanjay Dutt can fit in it. Other actors are also good. Gracy Singh _is_ pretty. Arshad Varsi supports Sanjay superbly.


Also worth mentioning is the theme song of this movie, ``Subah ho gayee mamoo...''


And yes, you can surely watch this movie _along_ with your entire family (one thing which lacks in most of today's Hindi movies.)

ADVERTISEMENT
This page was tagged for
munna bhai mbbs full movie in hindi
mbbs munna bhai full movie
munna bhai mbbs review
Munna Bhai MBBS hindi movie
Munna Bhai MBBS reviews
Follow @fullhyderabad
Follow fullhyd.com on
About Hyderabad
The Hyderabad Community
Improve fullhyd.com
More
Our Other Local Guides
Our other sites
© Copyright 1999-2009 LRR Technologies (Hyderabad), Pvt Ltd. All rights reserved. fullhyd, fullhyderabad, Welcome To The Neighbourhood are trademarks of LRR Technologies (Hyderabad) Pvt Ltd. The textual, graphic, audio and audiovisual material in this site is protected by copyright law. You may not copy, distribute, or use this material except as necessary for your personal, non-commercial use. Any trademarks are the properties of their respective owners. More on Hyderabad, India. Jobs in Hyderabad.