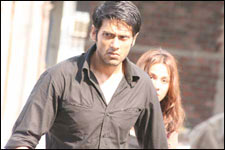 A Varma film is now like a dish that became an instant favorite when you first tasted it in a new restaurant. You ranted and raved then, and couldn’t get enough. You aren’t likely to do the same on your 20th visit, even if the dish still tastes the same. Now you have taken that standard for granted, and while you still like it, and you look forward to it as long as it is at a certain frequency, it will never be like the unexpected burst the first time.

So Shiva 2006 is basically the millionth gangster film from Varma’s stable. It razes through the checklist – a powerful mafia manned by a chillingly terse boss and surly, unkempt goons who look more authentic than the real thing, ruthlessly brutal bash-ups and no-nonsense shoot-outs, laconic expression, piercing background music and almost smutty skin-show. While the original Shiva was a burst of creativity, 2006 is a, well, factory product.

Perhaps not even fully so. The dialogues are in general not as slick and impactful as in most Varma films. There is a sense of déjà vu, with James and Ab Tak Chappan too recent in memory. There is no one killer tune. And there are no stars who can draw in the crowds by themselves.

And a belt does not compare to a cycle chain.

Yes – since this one is touted as version 2 of the legendary Telugu original, it warrants a reality check. Shiva worked because it was set on a college campus, and revolved around students – the identification was immense, since each one of us has seen and experienced hooliganism and politics on campus, and there had been no authentic reflection on screen. On the contrary, there have been too many good films on corrupt cops.

Then, in something very Hyderabad-specific, Shiva was a Telugu film, and the characters, lingo and settings were all things you could recognize, identify with. Shiva 2006 is all Mumbai, so the appeal will be much more restricted.

Shiva had its wow moment in the first fight in the college grounds. And that cycle-chain scene is unforgettable – that scene was perhaps half the reason for the film’s success, and combined with the café scene (where Nagarjuna pours coffee on the face of a gangster) and the railway track scene, made the entire film look brilliant. 2006 has no parallels. This one almost looks like Varma has lost his touch.

Finally, Shiva had a script – the slow rise of a student into a full-fledged don that the entire city idolizes. The Shiva of 2006 is just an SI, then resigns and becomes a faceless man. Whatever little he does to improve the city on his own is a quick collage of scenes lasting the final 15 minutes, looks a little too much like Ab Tak Chappan and other Varma film denouements, and is not as good.

Shiva Kumar (Mohit Ahluwalia) is an honest man who enters what can be a wrong profession for honest men – he becomes a police officer, an SI. He sees his own superiors hobnobbing with men of Bappu (Upendra Limaye), a gangster who’s become a politician, and has to turn a blind eye. He befriends a DNA reporter Sandhya (Nisha Kothari), and one day when some goons of Bappu get fresh with her, he takes them on.

Things are not the same again. Bappu launches war, but Shiva is too good by sheer physical power for all of them. And as the media makes him a hero, Bappu and Shiva’s superiors have to cool off. A sting by Sandhya exposes Bappu, and he has to go underground to escape arrest. He threatens to expose the home minister Sadanand (Dilip Prabhawalkar), who then tries himself to get Shiva eliminated. But, like we said, Shiva is simply too powerful physically.

One of the thoughts that you come up with is that there was no reason to remake the film. It’s public knowledge that Varma wanted to prove a point to the director of James about how James should have been made. He’s made the same mistakes that that guy did – James too relied too much on the physical prowess of one guy instead of on a script, and so does Shiva 2006. Like we said, the original Shiva showed the rise of an ordinary college student into a force. This one is about the various physical fights of a well-built man.

There are also some bits that seem to have gotten chopped off – what was Bappu’s mother doing in the film, and what was it that Sandhya did that forced Bappu to go underground?

The movie does have some Varma-trademark innovative bits – like the shadow scenes when Shiva rescues Sandhya from goons – but the facts that it is not a Telugu film, and that it is over-hyped, work against it. Mohit Ahlawat needs to do little apart from maintaining a single look, and it’s Nisha who actually has some scope for performance. All other performances are decent.

This one is still worth a watch if you are a Varma fan. Like we said, it’s another serving of the standard dish.

ADVERTISEMENT
This page was tagged for
Download shiva 2006 movie in hindi
shiva movie mohit ahlavat hero
Shiva 2006 Hindi Dubbed full Movie download
Shiva 2006 Hindi Dubbed Movie download
Shiva full movie Hindi 2006 Download
Follow @fullhyderabad
Follow fullhyd.com on
About Hyderabad
The Hyderabad Community
Improve fullhyd.com
More
Our Other Local Guides
Our other sites
© Copyright 1999-2009 LRR Technologies (Hyderabad), Pvt Ltd. All rights reserved. fullhyd, fullhyderabad, Welcome To The Neighbourhood are trademarks of LRR Technologies (Hyderabad) Pvt Ltd. The textual, graphic, audio and audiovisual material in this site is protected by copyright law. You may not copy, distribute, or use this material except as necessary for your personal, non-commercial use. Any trademarks are the properties of their respective owners. More on Hyderabad, India. Jobs in Hyderabad.