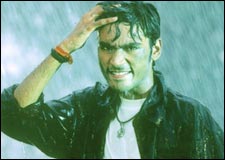 Priyanka Pulla / fullhyd.com
EDITOR RATING
1.0
Performances
Script
Music/Soundtrack
Visuals
NA
NA
NA
NA
Suggestions
Can watch again
NA
Good for kids
NA
Good for dates
NA
Wait to rent it
NA
A stubborn, brick-hard lack of ideas hits you when you try to describe Maurya in more than those two unflattering words about what I M Weasel likes to do with his egg-yolk. (Hint hint - he likes to SUCK it.) You could grow creepers regularly watering concrete, but you couldn't, for the life of you, find something novel in Maurya.

It is an aggregation of all scenes stale, all dialogues clichéd, and all characters vulgarly regressive. This movie, with Rajnikant's 'alludu' as the titles describe him, is a monumental atrocity on your senses. Rajnikant fans can shoot me if they care.

Dhanush plays the college-kid whose raison d'etre is to woo a garishly dressed Kavya (Sindhu Tolani) and hack goon Suri (Pasupathi) to death with the gruesomeness of Bhima tearing up Jarasandha. These two tasks he accomplishes with inordinate fanfare, rows of incongruous, abrubtly ending scenes, and an utter lack of the dash his legendary father-in-law exudes like a beacon.

To top it, his anaemic look does nothing to make his heavily animated fight scenes with beefy goons believable. He is a weird kind of hero, with no ties or claim to herodom other than marital ones. For most audiences, that ain't good enough.

Dhanush is Sri Maurya, whose father Mani is an MCH garbage-trucker and sister is a responsible, lecture-spewing citizen of the society and family. He is the prodigal son who picks up fights with the mafia, and ultimately the one who avenges Mani's murder at the hands of Suri.

Why it is all triggered off is a meaningless series of coincidences. Well, we always knew coincidences were meaningless unless we subscribed to the Brian Weiss school of thought, but these are particularly so. How can any incident that occurs with the sole purpose of taking this blunder of a movie ahead, be anything but meaningless?

Songs are strewn across as carelessly as pollen by bees in the springtime, and together with the abruptly severed scenes, they seem ridiculous. If there were a Razzie for absurd song placing, Maurya would be it. There is a scene where Maurya goes to jail after smashing through a liqour shop, and it segues without explanation into a song with a skimpily-clad Kaavya undulating all around him.

Another scene has a bunch of rowdies chasing Kaavya who is wearing a half-sari. Her modus operandi to tick them off is to rip-off her own sari bit by bit until she is left in nothing but shorts and a sports-bra. The villians are bamboozled and Kaavya walks off with hip-swaying elan. Cut.

The movie is a jumble of scenes like these. Scenes that have a Zen-like philosophy and progression - no end, no beginning, no message, just a great big vacuum they leave in your mind with their screwed up logic.

Dhanush, like we said, needs all the help he can get from special effects to go through his fight-scenes. Without those, he would probably look like a kid jumping around in a sandbox. With them, he looks like a cross between Captain Planet and a Kenyan refugee. We are pretty sure he can be a good actor, but why not choose roles that suit him and then try a little grooming to boot?

In any case, this movie of Rajnikant's son-in-law is a terrible downer. Maybe a 10-minute appearance from Rajnikant himself could have saved it, but it doesn't happen. Meanwhile, it is bound to run to resoundingly empty houses. There is no way it can do better.
Share. Save. Connect.
Tweet
MAURYA SNAPSHOT

ADVERTISEMENT
This page was tagged for
murgya telgu hot movie
Maurya Telugu come
Maurya telugu movie
Maurya reviews
release date
Follow @fullhyderabad
Follow fullhyd.com on
About Hyderabad
The Hyderabad Community
Improve fullhyd.com
More
Our Other Local Guides
Our other sites
© Copyright 1999-2009 LRR Technologies (Hyderabad), Pvt Ltd. All rights reserved. fullhyd, fullhyderabad, Welcome To The Neighbourhood are trademarks of LRR Technologies (Hyderabad) Pvt Ltd. The textual, graphic, audio and audiovisual material in this site is protected by copyright law. You may not copy, distribute, or use this material except as necessary for your personal, non-commercial use. Any trademarks are the properties of their respective owners. More on Hyderabad, India. Jobs in Hyderabad.