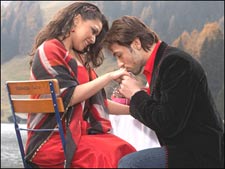 Krishna KBS / fullhyd.com
EDITOR RATING
3.0
Performances
Script
Music/Soundtrack
Visuals
8.0
3.0
8.0
8.0
Suggestions
Can watch again
No
Good for kids
Yes
Good for dates
Yes
Wait for OTT
Unsure
Probably the last film to click at the box office without having recognizable actors in the lead roles was Tum Bin. It's unfortunate that Haal-e-Dil is not being publicized as aggressively as that one. Unless you are a real movie buff, you most likely did not even know that this film released.

It is also a pity that the director has not spent as much time on the script as he should have. The result is that the movie ends up as a poor cousin of hits like Dilwale Dulhania Le Jayenge and Jab We Met. It seems that every time the director got stuck with a scene, he watched the aforementioned movies and copied liberally.

Copying from a successful film may not be a bad idea, but if the copied scenes mask the basic story, and get imprinted on the viewer to such an extent that they can hardly remember anything else, it is not just a bad idea, but a disaster waiting-to-be. The worst part of this here is that the movie is based on a good idea - and revolves around identifiable emotions like love and sacrifice.

Sanjana (Amita Pathak) meets Shekhar (Naakul Mehta) at a party. For him, it is love at first sight. For her, it is just like any other meeting, as she is already in love with Rohit (Adhyayan Suman). Sanjana and Shekhar meet soon after on a train journey. For him this is destiny, and tries his best to woo her.

Interspersed with his antics are her memories of her affair with Rohit, ending with the recollection of Rohit's death. Shekhar on realizing that Sanjana snubbed him because she prefers to live with the memories of her beloved, does not give up. Instead, he takes up a week-long fast to prove his love to her.

In real life, standing outside the door of the person you love without taking food or water for a week will not perhaps get that person to accept you. You might even be thrown into jail for creating a nuisance, or even die. But then, this is cinema.

All the debutantes perform well, with Naakul Mehta stealing the show with his mischievous boy-next-door character. Amita Pathak looks a bit mature for her role; but she is depicted as being a sober girl with a penchant for the Gita, and thus is aptly cast.

Even the supporting cast is up to the job - with the actor playing the Bengali aunty on the train, and the child artiste playing the role of Sanjana's younger brother being particularly impressive. The music is top draw, and the visuals are breathtaking. The dialogues have their roots in comedy, and work more often than not.

Considering that there is drought of movies that you can watch with your family without squirming, you would do well to catch this one before it disappears. However, in all likelihood Haal-e-Dil is going to be forgotten within a week, and end up as an answer for trivia buffs to the question of what was Shekhar Suman's son's debut movie.

ADVERTISEMENT
This page was tagged for
haal e dil movie 720pl
haal e dil full movie
Haal-e-Dil hindi movie
Haal-e-Dil reviews
release date
Follow @fullhyderabad
Follow fullhyd.com on
About Hyderabad
The Hyderabad Community
Improve fullhyd.com
More
Our Other Local Guides
Our other sites
© Copyright 1999-2009 LRR Technologies (Hyderabad), Pvt Ltd. All rights reserved. fullhyd, fullhyderabad, Welcome To The Neighbourhood are trademarks of LRR Technologies (Hyderabad) Pvt Ltd. The textual, graphic, audio and audiovisual material in this site is protected by copyright law. You may not copy, distribute, or use this material except as necessary for your personal, non-commercial use. Any trademarks are the properties of their respective owners. More on Hyderabad, India. Jobs in Hyderabad.