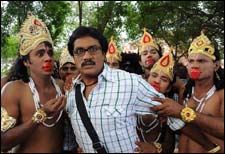 We mean the one who could have made KSD Appalraju a well-rounded, taut, deliciously wacky satire on Telugu cinema. Not the one who relentlessly continues to make self-indulgent monologues while proclaiming his disdain for "critics" (read "audiences").

Remember the Sridevi / Paresh Rawal jokes in Kshana Kshanam? Now, imagine being promised a marathon of them. Then, imagine being delivered a few of them, and then being dished out Aag.

KSD, as everyone sure would have figured out by now, is Ram Gopal Varma's tongue-in-cheek take on the workings of Tollywood, and is a grey comedy (contrary to his bizarre "confession" in the beginning of the movie that it is, in fact, a tragedy, and that it was marketed as a comedy purely to get audiences into the theatres). What begins as a fun ride soon starts looking less like a healthy parody, and more like the incoherent ramblings of an angst-ridden has-been.

The movie's protagonist is Appalraju (Sunil), an Amalapuram bloke who knows nothing about movies except for having watched them in his local cinema hall, and who wants to make what he thinks will be an awesome Telugu film.

He has an art flick in mind, a tragedy - defying every conventional rule possible in the film world. Despite his fierce conviction, he's forced to compromise on a zillion fronts, thanks to the multiple forces that influence a movie's production, release, and eventually, box office reception. Appalraju's perspective is an R K Laxman style common-man-peek into the eccentric, weird, money-minded, and sometimes insane, ways of the Telugu film world.

From sleazy producers to underworld financiers, talentless music directors to promiscuous actor-sons and air-headed actresses, Ram Gopal Varma uses all the fodder he has on hand to helm a promising satire. The first half of the flick sails through brilliantly, what with RGV poking fun at himself and his own movies, and with all the other insider jokes and spoofs. The song lampooning Tollywood's top guns, including directors and heroes, is a great product in itself.

The humour is understated and sarcastic, yet delightful. Indeed, it's always entertaining to see spoofs of our favourite film stars, especially because it reminds us of our hero-worshipping ways; a fact that KSD uses to its advantage.

The problem starts when everything begins to unravel - the jokes become long-drawn, the satire starts losing its point, and everything becomes an exaggerated scene in a school play. A ridiculously absurd anti-climax doesn't help matters either.

For example, Brahmanandam's hilarious intro scene is stuff that legendary comical scenes are made of, but his role is whittled down when they overdo it. Similarly, RGV's takes on film reviewers and distributors seem like caricatures, and quite misjudged. Also, the whole star-rivalry bit bores you out of your skull after a while.

Meanwhile, every single actor polishes off his role with elan - with Sunil, Raghu Babu, Harshavardhan, Brahmanandam, Ajay and Venu Madhav managing to grab most of the airtime. Swati might want to try toning down the "spontaneity".The experienced lot has smaller roles, but doesn't disappoint. And a cameo by a top star draws some whistles despite its pointlessness.

The music is no-fuss, but a puzzling item song in the end is quite putting-off. The visuals are drab, and high production values were clearly not on RGV's agenda while this film was made.

I do accept that the film is not upto the mark and certainly a disappointment to RGV fans like me.
Coming to the feedback, there is a lot of scope for improvement for this film. good story but poor screenplay. lots of useless scenes and useless dialogues. i dont think sunil is apt for this character. as a film, it is certainly a disaster. but varma sir is quite an honest person. he gave a disclaimer at the beginning of the movie that he has lied that its a comedy film.

Hats off to your honesty Varma sir.
i'll still watch your films.

ADVERTISEMENT
This page was tagged for
KADHA SCREENPLAY DARSAKATVAM APPALARAJU REVIEWS
appalraju full movie
KSD (Katha Screenplay Darsakatvam) Appalaraju telugu movie
KSD (Katha Screenplay Darsakatvam) Appalaraju reviews
release date
Follow @fullhyderabad
Follow fullhyd.com on
About Hyderabad
The Hyderabad Community
Improve fullhyd.com
More
Our Other Local Guides
Our other sites
© Copyright 1999-2009 LRR Technologies (Hyderabad), Pvt Ltd. All rights reserved. fullhyd, fullhyderabad, Welcome To The Neighbourhood are trademarks of LRR Technologies (Hyderabad) Pvt Ltd. The textual, graphic, audio and audiovisual material in this site is protected by copyright law. You may not copy, distribute, or use this material except as necessary for your personal, non-commercial use. Any trademarks are the properties of their respective owners. More on Hyderabad, India. Jobs in Hyderabad.