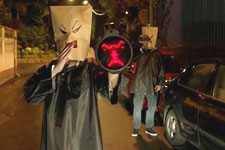 T J Reddy / fullhyd.com
EDITOR RATING
5.5
Performances
Script
Music/Soundtrack
Visuals
5.0
4.0
7.0
8.0
Suggestions
Can watch again
Yes
Good for kids
No
Good for dates
Yes
Wait to rent it
Yes
He's the hero Mumbai deserves, but not the one it needs right now. So, they'll hunt him down, because he can take it. Because he's not a hero. He is a silent guardian. A Watchful Protector. A BHAVESH JOSHI... *record scratch*... what now?

Yes, dear reader. Indian superheroes don't come with animal-related names simply because the Americans have co-opted every single "cool" animal known to man. We are sure a platypus-man is roaming around protecting his local watering hole in some obscure comic book. Hence we get the Krrishs, Flying Jatts, Chota Bheems, Mallanas and Bhavesh Joshis (aka Insaafman) of the world. Some of those heroes are better than others, and that leaves us with the question, "Where does Bhavesh Joshi fall in this spectrum?"

The film tells the story of how Bhavesh Joshi "the citizen" became Bhavesh Joshi Superhero by chronicling the lives of three friends Bhavesh (Priyanshu Painyuli), Siku (Harshvardhan Kapoor) and Rajat (Ashish Varma). The trio was steadfastly on Anna Hazare's side back in 2011 and continued to follow his principles as time passed by. They add their touch to the proceedings by creating a loud-mouthed YouTube channel named Insaaf by means of which they share and shame common social evils such as public urination, tree cutting and trash burning.

Sure enough, one of them inadvertently stumbles onto a large-scale government conspiracy, and the trio soon find out that to be a superhero in India one needs to fight a corrupt system as much as they need to fight local street thugs. Does that sound like the plot of a run-of-the-mill Tollywood film? You are not mistaken. Bhavesh Joshi Superhero is a well-shot, excellently-lit, technically-adept, pulse-poundingy scored, modernized version of an average Indian vigilante story.

The strength and weakness of Vikramaditya Motwane's film lies with how it feels both fresh and familiar. This movie is not made for an audience of children who look forward to the Krrish toy with their Happy Meal. And it is not a Frankenstein's monster of a film that gleefully combines plot points from ET, Close Encounters Of The Third Kind, X-Men and a few other choice cinematic outings without a sense of structure. But that doesn't stop it from borrowing elements from better films and TV shows that came before it. Be it the plot threads and costumes from Batman: Year One or the look and feel of Daredevil, the TV show. The film's derivative nature becomes alarming in its second half.

However, its first half exudes a freshness in approach and storytelling. The trio of friends seems to like the ones you have on FaceBook who spam your feed with anti-corruption memes and posts. Their dialogue isn't hackneyed, their romances aren't sanitised, their villains are ones you've seen on the news and not in comic books, and the heroes, in themselves, aren't infallible.

Post-intermission is when the Bhavesh Joshi goes from being a superhero origin story to a super-slogfest made palatable only by the technical mastery of the men and women behind the camera. The only difference between this movie and the many vigilante-based films we see on a weekly basis is that the protagonist here is shown training to be as a badass, and is not a badass inherently.

While the fact that the film retraces age-old tropes and storytelling techniques is disappointing enough, the fact that it short-changes itself with its montages and action sequences is unfortunate in its own right. The technique by which the movie's action sequences are staged and executed make it clear that its star is not the man behind the mask. The use of a stunt double cannot be concealed by shaky camshots, and it takes away from Harshvardhan Kapoor's performance and the film's salt-of-the-earth appeal.

Talking about the young Kapoor, he is at his best while playfully playing off his co-stars. His interactions with his fellow men and woman are written, acted, timed and executed to perfection. Those are his strengths. His weaknesses rise, like the crime his beloved city festers, when he is left to his own devices. His inadequacies as an actor are far clearer when he must carry sequences by himself. He lacks the presence and nuance a man behind a mask needs. Priyansh Painyuli's earnestness and Ashish Varma's skill trump Kapoor almost every time.

The lack of a formidable foe may be the film's most evident undoing. The movie structures itself like a Batman game from the acclaimed Arkham series. A head honcho puts out a hit on our hero, and the former's many underlings carry out his wishes. However, none of these characters is in any way memorable. They aren't given enough time to develop, and their only raison d'etre is to set up a mirror to society to show how politicians and their oratory dictates our view of any dissenting voices. An interesting avenue to explore, indeed, but one that isn't done thoroughly enough. This is doubly frustrating when you realize that the film is two and half hours long.

However, the movie is a joy to watch simply because of how well it is styled and put together. There is an acute lack of light in many scenes, but the darkness is shot and rendered with an extremely deft touch. The film's use of gliding camera movements, precise edits and refractive lighting, the claustrophobia-inducing darkness of an uninhabited city, and the rule of sticking to the basics when telling a story visually make its ho-hum script interesting from time to time.

Amit Trivedi's music, while overbearing (at times), is truly mesmeric when isolated from the action on screen. Dare I say, the film's use of score puts some of the movies from the MCU to shame. And it is the use of the jovial score dedicated to Insaafman (an early iteration of Bhavesh Joshi) that truly captures the feeling the film induces as the credits start to roll.

After a final monologue buoyed by a swelling tune ends, the movie's credits are accompanied by the tune assigned to the protagonists' sillier and more earnest efforts at the start of the film. This reminds you of a time where a movie was more enjoyable, and an artistic endeavour not bound by the tropes of Bollywood cinema in general and superhero cinema in particular. As it tries to justify the "Superhero" in its title, the film forgets the "Bhavesh Joshi" that precedes it and why the incongruous combination of the two made it an interesting prospect to begin with.

A valiant hero vanquished by his own need to justify himself to an audience he can't see. We salute your effort, but may forget your sacrifice sooner than you think.
Share. Save. Connect.
Tweet
BHAVESH JOSHI SUPERHERO SNAPSHOT 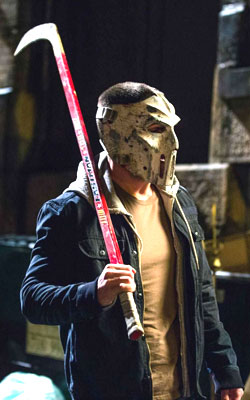 ADVERTISEMENT
This page was tagged for
Bhavesh Joshi Superhero hindi movie
Bhavesh Joshi Superhero reviews
release date
Harshvardhan Kapoor, Priyanshu Painyuli
theatres list
Follow @fullhyderabad
Follow fullhyd.com on
About Hyderabad
The Hyderabad Community
Improve fullhyd.com
More
Our Other Local Guides
Our other sites
© Copyright 1999-2009 LRR Technologies (Hyderabad), Pvt Ltd. All rights reserved. fullhyd, fullhyderabad, Welcome To The Neighbourhood are trademarks of LRR Technologies (Hyderabad) Pvt Ltd. The textual, graphic, audio and audiovisual material in this site is protected by copyright law. You may not copy, distribute, or use this material except as necessary for your personal, non-commercial use. Any trademarks are the properties of their respective owners. More on Hyderabad, India. Jobs in Hyderabad.