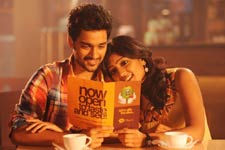 Ravi Kandala / fullhyd.com
EDITOR RATING
7.0
Performances
Script
Music/Soundtrack
Visuals
7.0
8.0
5.0
7.0
Suggestions
Can watch again
Yes
Good for kids
Yes
Good for dates
Yes
Wait to rent it
No
The biggest cliche in the film industry is the word "different". When a director, producer or actor says that his movie is "different", or that he has attempted something "different" in his movie, the result is usually the most hackneyed potboiler with the most predictable and oft-repeated plotline. You can hardly ever blame them - that is what they do best - but you still wish someone would actually do something different. Well, here is something different.

Writer, director Mohankrishna Indraganti's Anthaka Mundu Aa Taruvatha (AMAT) is similar to several love stories that you've seen, in terms of the puppy romance it portrays, but is also different from them, in terms of the route it takes to bring this romance to its happy ending. Before we get to that, we'll get the mandatory plot summary out of the way.

The film is about Anil (Sumanth Ashwin) and Ananya (Eesha), a very-much-in-love couple who have doubts about taking their relationship to the next level. These doubts, in part, arise from the issues faced by their parents (played by Rao Ramesh and Rohini, and Ravi Babu and Madhubala - yes, the Chinni Chinni Aasa girl from Roja).

The two decide to live together as a couple to see if they are really compatible, and treat it as a test for their love. Whether they pass this exam with distinction, or merely pass, or fail completely, forms the plot - or not!

AMAT is not about whether or not they pass - it being a romantic Telugu entertainer, the result is a given. The film is instead about how they pass - about how they realise that life is not all about one-hour dates where people dress to impress each other and put on their best behavior for the duration of the date.

Indraganti crafts a mature love story with no shortcuts - the boy and the girl feel a mutual attraction, but take their time to express their feelings to each other. They start arguing, and walk out on each other on day two when they start living together, but go back to each other and give the experiment more time. And when they finally come together in the end, it is not because they decide that they can't live without each other - it is because they decide that they can live with each other in spite of all their flaws.

The director tackles a variety of topics boldly - including menstrual cycles and premarital sex - and makes some wonderful points along the way. When Anil says to a friend (Srinivas Avasarala in a very good role) that this is a test for his love, his friend simply remarks that he should not wait to get full marks, that a relationship does not work that way. When Ananya mentions to her friend Latha (again played nicely by Jhansi) that this is their test, Jhansi straightaway asks her if she will continue taking such tests with different people till she is successful! The writing is simple, straightforward and hard-hitting.

The acting is understated and good. Sumanth Ashwin, producer M S Raju's son, is good as the boy next door, and does well in his role. There are raw edges, but then, this is his second movie.

Eesha, a debutante, is completely believable, and does very well where she has to be herself (meaning she looks extremely uncomfortable in the filmy duets). The supporting cast does a good job too, with Rao Ramesh, Rohini and Ravi Babu pitching in with nice performances.

The only actor striking a false note in AMAT is Madhubala, who makes a pretty bad comeback. She also looks anorexic, and like someone who's taken uncontrolled Botox treatment to look plastic.

The music is functional, and the songs are mostly in the background. The visuals are extremely pleasant, with some nice and pleasing colours. The producers need to be truly given a pat on the back for backing this project.

If we have to nitpick, we would say that the movie is slightly slow, and also low on entertainment. But AMAT is indeed an important movie that deserves to be seen. For all the candyfloss or vulgar romances that we get in the name of youth love stories, AMAT is a clean, mature, well-written film that raises some serious questions and even attempts to answer them.
Share. Save. Connect.
Tweet
ANTHAKU MUNDHU AA THARUVATHA SNAPSHOT 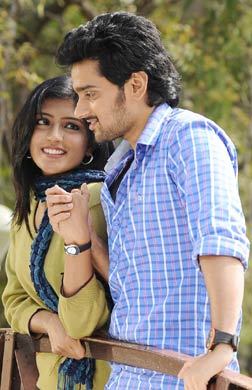 See Anthaku Mundhu Aa Tharuvatha full details
TOP COMMENT
Hari on 24th Aug 2013, 9:57pm | Permalink
Watched this movie and I realized that Mr. Mohana Krishna Indraganti is a en extremely talented person. This, so far, is the high point in his short career. The movie got elevated with his writing. His grip on telugu language is envious. I watched this in a small theatre which was about 30% full mostly with young and middle aged couples. The audience spontaneously laughed out loud at several moments which cannot be termed as comedy but could mostly relate to themselves. Srinivas Avasarala was brilliant with his diction. He also had some of the best lines written. The strength of director showed in the performance of not the lead characters but the supporting ones. Each of those were believable and acted well. Leads characters Sumanth and Eesha were brilliant together. Good to see a telugu girl getting a great role. I agree that Madhubala looked anorexic and pale. But she acted her part well (save for some disconnected (and funny) hand movements not in sync with the dialogue..language barrier perhaps). Rao Ramesh, Rohini, Ravi babu, Jhansi etc all contributed to a great experience. Thagubotu Ramesh in a non drunkard couple of scenes was great. Directors should look to use his acting talent and not just confine him to drunkard roles. Finally, Kalayani Koduri's melodies just grow on you.
Overall, this is a great movie. I thoroughly enjoyed this and hope to see many more conversation based movies in future.

ADVERTISEMENT
This page was tagged for
Anthaka Mundu Aa Tarvatha kickass
anthaku mundhu aa tharuvatha full movie 2013
antaku mundu aaa taryvata cast
Anthaku Mundhu Aa Tharuvatha telugu movie
Anthaku Mundhu Aa Tharuvatha reviews
Follow @fullhyderabad
Follow fullhyd.com on
About Hyderabad
The Hyderabad Community
Improve fullhyd.com
More
Our Other Local Guides
Our other sites
© Copyright 1999-2009 LRR Technologies (Hyderabad), Pvt Ltd. All rights reserved. fullhyd, fullhyderabad, Welcome To The Neighbourhood are trademarks of LRR Technologies (Hyderabad) Pvt Ltd. The textual, graphic, audio and audiovisual material in this site is protected by copyright law. You may not copy, distribute, or use this material except as necessary for your personal, non-commercial use. Any trademarks are the properties of their respective owners. More on Hyderabad, India. Jobs in Hyderabad.