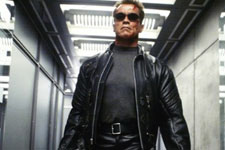 Zehra Abbas / fullhyd.com
EDITOR RATING
6.5
Performances
Script
Music/Soundtrack
Visuals
6.0
6.0
7.0
7.0
Suggestions
Can watch again
No
Good for kids
No
Good for dates
Yes
Wait for OTT
No
From Terminator to Governator, and now back to being Terminator - Arnold Schwarzenegger has come full circle. However, it seems that this circular journey has made him dizzy because nothing else can explain what he's doing in Terminator Genisys.

John Connor (Jason Clarke) is the leader of the resistance against Skynet, which sends a T-800 back in time to kill Sarah Connor (Emilia Clarke), John's mother. Enter Kyle Reese (Jai Courtney), who volunteers to save Sarah. Director Alan Taylor, and writers Kalogridis and Lussier now take the time travel idea, which is central to the franchise, and introduce alternative timelines. Pull out the Tiger Balm at this point, please.

Reese is zapped back into 1984 (butt-naked of course), and discovers that, in this alternative timeline, Sarah isn't a helpless waitress waiting for him to rescue her. She is a battle-ready heroine ably supported by an old T-800, her bodyguard since age 9, whom she calls - hold your breath - Pops (Arnold Schwarzenegger). If Schwarzenegger had refused the film based on that title alone, we would have approved. On top of that, he repeats this line ad nauseam - "I'm old, but I'm not obsolete." Why Taylor would give a midlife crisis to our beloved killer cyborg is beyond us.

Reese discovers that not only Sarah, but a T-1000 (Byung-hun Lee) is also waiting in the shadows for him, and let's not forget the T-800 that he had come to intercept in the first place. The former is a molten metal mirror image of the original (and more sinister) T-1000 from Terminator 2: Judgement Day, while the latter is a computer-generated young Schwarzenegger, and it's fun to watch him go head-to-head with "old, not obsolete" Arnie.

Sarah and Reese then time travel to 2017 (butt-naked of course), and predictably enough, spend most of the movie on the run, with Pops providing some burly support. This gives the makers ample room for Terminator style action. The usual suspects are all there - explosions, car chases, hand-to-hand slugfests - but you've seen it all before. Not just in other films, but in the older Terminator films, too. The underwhelming SFX dutifully props up this lack of imagination as much as possible.

Perhaps the only marginally stimulating variation (ruined in advance for those who watched the trailer closely) is the change in John Connor's character arc. A few of the action sequences involving him are different, but they too are submerged in the bang-bang-boom-boom trope soon enough.

Jason Clarke is an interesting choice for John Connor's role, and he does his best to give complexity to his previously messiah-like character. He succeeds, as much as the poor writing allows him to, but Jai Courtney doesn't have his costar's kind of charisma at his disposal. His performance as Reese is just plain bland.

Emilia Clarke, made famous by Game Of Thrones, seems like a clever choice for a new age Sarah Connor, and to her credit she gives it her all. But the fresh-faced, rosy-cheeked and blue-eyed actress is unable to channel the sinewy badassery of the iconic Linda Hamilton.

And then there's "Ahnuld". It's great to see him back, but this film isn't a successful comeback vehicle. Taylor tries to address the actor's age, and the implausibility of him reprising this role. In the process, he reduces Schwarzenegger to a joke.

Sure, he's old, but why did he suddenly have to become an intellectual? The writers came up with some crazy science to explain the time travel, and then they decided - yeah, let's make the machine with the thick Austrian accent explain it all. Pops talks non-stop, and mostly about things like algorithms and nexuses, and it's hard not to laugh out loud. Also, he has inexplicably acquired emotions for "my Sarah", but he still hasn't learned how to smile. He grimaces, and that's supposed to make you laugh.

Cringe-worthy humour aside, Schwarzenegger is mostly an action prop, rising from the ashes again and again, and throwing massive punches every ten minutes.

Even a larger-than-life star like Schwarzenegger needs a good script, and that's the biggest problem with Terminator Genisys. The writers created a plot so convoluted that they ended up tying themselves in knots. They assumed that they had discovered a winning formula - combine the new (alternative timelines) with the old (a running homage to the most famous elements of the franchise). It doesn't work as well as they had hoped. The homage reminds you how good the James Cameron films were, and ultimately the constant self-referencing is a crutch that highlights how handicapped this film is.

So adjust your expectations when you go for this one - don't expect sci-fi masterpieces like parts 1 and 2, and you'll be fine. This is a big action flick - it has Schwarzenegger, guns and nostalgia. Revel in that trio. But, when Schwarzenegger mouths the most famous line of this dying franchise - "I'll be back" - you know what to say. 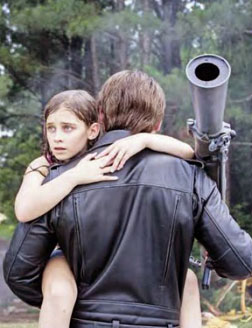 ADVERTISEMENT
This page was tagged for
Terminator Genisys english movie
Terminator Genisys reviews
release date
Arnold Schwarzenegger, Jason Clarke
theatres list
Follow @fullhyderabad
Follow fullhyd.com on
About Hyderabad
The Hyderabad Community
Improve fullhyd.com
More
Our Other Local Guides
Our other sites
© Copyright 1999-2009 LRR Technologies (Hyderabad), Pvt Ltd. All rights reserved. fullhyd, fullhyderabad, Welcome To The Neighbourhood are trademarks of LRR Technologies (Hyderabad) Pvt Ltd. The textual, graphic, audio and audiovisual material in this site is protected by copyright law. You may not copy, distribute, or use this material except as necessary for your personal, non-commercial use. Any trademarks are the properties of their respective owners. More on Hyderabad, India. Jobs in Hyderabad.