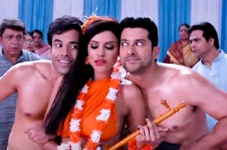 When you guys first asked me if I would like to review for your esteemed site, I felt honoured. I jumped at the opportunity and threw in all enthusiasm I had into this exciting venture. Among the best things that ever happened to me, I thought. But I hadn't the faintest inkling that on one godforsaken day I'd have to watch Kya Kool Hain Hum 3. That changes everything, you know.

In one fell swoop, Kya Kool Hain Hum 3 made me regret every single decision I had made in my life - right down to the colour of undergarments I wore during school. You never know which decision landed me in this situation today. So I felt it best to question every single thing I'd ever done and blanket regret all of it. Wow - I didn't know I believed this much in Karma until it unleashed its full wrath on me in the form of this travesty on the name of cinema.

What is the matter, you ask? Everything, I must say.

Now how bad can that be? As bad as the stench in the toilets of the Imliban bus stand. As bad as Sant Sri Gurmeet Ram Rahim Singhji Insaan's chances of winning an Academy Award. As bad as the fate of the fools who kidnap Liam Neeson's daughter.

But that's what sex-comedies are made of! Inane plots with silly contrivances and lots of innuendo. Yup. And that's not what I'm complaining about. Allow me to explain. Sex and comedy are among the most amazing things that a human can experience in this short miserable stay on earth called life. A cheesy corny comic romp with loads of explicit and risque humour is very much up anybody's alley. But the problem here is that this purported sex-comedy called Kya Kool Hain Hum 3 has got neither sex nor comedy.

It is the weirdest form of a sex film you can have. The film is so uncomfortable about sex it could very well have been a conservatively brought up pubescent teen discovering naked women on the internet. The film hasn't got the balls to discuss sex on screen or feel all right about it. The only way it keeps up the pretense of being a sex film is by throwing so much cleavage on screen it could make a guy get sick of cleavage. You'd think such a feat is impossible but hey, what do you know? I'm the miserable sod who watched this abomination and I swear I was sick of bosoms by the end. Yeah, I know I ought to worry about my masculinity, but I was too busy worrying for my sanity.

The film's idea of comedy is to come up with lines like "Yeh tere jhoot moot honewali doosri sauteli maa hain" (She's your pretend prospective second stepmother). A woman gasping orgasmically is said to have asthma and yet another woman groping herself uncontrollably is supposed to be suffering an itch. And when finally Tusshar Kapoor lands in a red saree like Vidya Balan in Dirty Picture, I gave up.

I have in my time watched terrible movies. Including a veritable classic starring Poonam Pandey. But you know why they were still forgivable? Because they were legitimate efforts which turned out to be colossal failures. Those wretched souls who made those movies thought they were on to something decent and put in honest efforts (even if their success might be likened to that of a penguin trying to find a mate in middle of the Kalahari).

The makers of Kya Kool Hain Hum 3, however, finished the movie before conceiving it. Attempts this lazy may only be found at contests where the first prize is the certain contraction of Syphillis. They don't make the slightest effort to act, or to write, or to direct. The emphasis is almost fully on exposing their women, and then some more. And like I said, I was worrying for my mental health by the end of this directionless, meaningless, senseless rot blanketed by hectares of smooth skin.

You are probably aware of Suthi Veerabhadra Rao's going mad in the Telugu classic Aha Naa Pellanta. I empathised with him today. By the time the movie ended, I was summoning my chauffeur to bring my stallion so I may mount it and fly to Mars for breakfast at 8 pm with Darth Vader.

My good sirs, you have been great people to work with. But this profession has occupational hazards that I have not the mental strength to cope with. Should a Kya Kool Hain Hum 4 release and you ask me to review it, I'll turn in my papers and quit watching movies altogether. 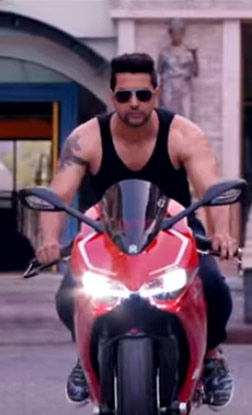 On a serious note, I am not averse to reviewing sex comedies in general. The problem with this one is it is very very badly made. One can't say anything yet about Mastizaade till one sees it.
Cobra nikhil on 23rd Jan 2016, 10:25pm | Permalink
Josh, I am planning to see this movie and i have a few questions for you
1.did u get a boner?
2.can i take my gf with me?
3.if i choose to go alone can i oogle at the heroine?
4.which is worse?this one or the desi "christopher nolan" skumar masterpiece of shit nannaku prematho??
Josh on 24th Jan 2016, 9:08am | Permalink
In my opinion, Express Raja is the best release in the last ten days.
Ravi Kandala on 23rd Jan 2016, 8:18pm | Permalink
I hear you Josh... I guess I have you to thank for saving me from this abomination!
Josh on 24th Jan 2016, 8:49am | Permalink
Deeply appreciate your sympathies, Ravi. I guess you owe me one now :)
LEAVE A COMMENT
fullhyd.com has 700,000+ monthly visits. Tell Hyderabad what you feel about Kyaa Kool Hain Hum 3!
MORE MOVIES
Latest Reviews
Writer Padmabhushan
Michael
Hunt
Pathaan
Waltair Veerayya
more
Veera Simha Reddy
Top Gear
18 Pages
Dhamaka
Connect (Telugu)
Avatar: The Way of Water
Panchathantram
Gurtundha Seetakalam
Violent Night
Matti Kusthi
Contemporary Reviews
Airlift
Saala Khadoos
Seethamma Andalu Ramayya Sit...
Mastizaade
Lachimdeviki O Lekkundi
more
Speedunnodu
Ghayal Once Again
The Hateful Eight
Soggade Chinni Nayana
Dictator
Express Raja
Nannaku Prematho
Our Brand Is Crisis
Daddys Home
Random Reviews
Chalo Assembly
Swimfan
Khanjar
Raghavendra
Mangal Pandey - The Rising
more
Aeon Flux
Pirates Of The Caribbean - A...
Saroja
Red Cliff (Hindi - Maha Vish...
Tum Hi To Ho
Bodyguard (Telugu)
Die Hard 5 - A Good Day To D...
The Emoji Movie (3D)
Gully Boy
Spider-Man: No Way Home - Te...
SEARCH MOVIES
Dissatisfied with the results? Report a problem or error, or add a listing.
ADVERTISEMENT
SHOUTBOX!
{{todo.name}}
{{todo.date}}
[
ip{{todo.ip}}
]
{{ todo.summary }}... expand »
{{ todo.text }} « collapse
First  |  Prev  |   1   2  3  {{current_page-1}}  {{current_page}}  {{current_page+1}}  {{last_page-2}}  {{last_page-1}}  {{last_page}}   |  Next  |  Last
{{todos[0].name}}

ADVERTISEMENT
This page was tagged for
watch kya kool hai hum 3
kya cool hai hum 3 movie full movie
kya kool hain hum 3 full movie in hindi
Kyaa Kool Hain Hum 3 hindi movie
Kyaa Kool Hain Hum 3 reviews
Follow @fullhyderabad
Follow fullhyd.com on
About Hyderabad
The Hyderabad Community
Improve fullhyd.com
More
Our Other Local Guides
Our other sites
© Copyright 1999-2009 LRR Technologies (Hyderabad), Pvt Ltd. All rights reserved. fullhyd, fullhyderabad, Welcome To The Neighbourhood are trademarks of LRR Technologies (Hyderabad) Pvt Ltd. The textual, graphic, audio and audiovisual material in this site is protected by copyright law. You may not copy, distribute, or use this material except as necessary for your personal, non-commercial use. Any trademarks are the properties of their respective owners. More on Hyderabad, India. Jobs in Hyderabad.