Stuck On You Review 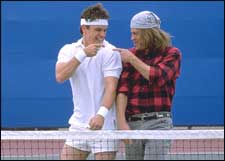 Neha Tejuja / fullhyd.com
EDITOR RATING
6.0
Performances
Script
Music/Soundtrack
Visuals
NA
NA
NA
NA
Suggestions
Can watch again
NA
Good for kids
NA
Good for dates
NA
Wait to rent it
NA
Nothing will come in between the brothers Bob (Matt Damon) and Walt Tenor (Greg Kinnear) - this is made quite explicit from the very start of Stuck On You. Not even their own lives. Why? If you don't already know, the brothers are Siamese twins. Oops, sorry for that gross, most horrifying of all errors - we mean, conjoined twins ('cos Bob breaks out into a rash when you mention the word 'Siamese').

Bob and Walt live a small town life, do everything that they want to and go through life without feeling the weight of the other. Bob is the shy, nervous, prone to panic attacks, athletic brother, while Walt is the smart, smooth and suave one. They do everything as a team - sleep, date, work and play sports. Yes, they play sports. And how they manage to do that is beyond us. Probably the same way that they manage to fox trot, throw a few punches and pursue their intimate interests. So kicking a football around or blocking a goal shouldn't seem like much of a task.

Everything is imported straight from Hunky-Dory Land until Walt realises that Hollywood is where he wants to be. Now, the brothers had made a pact that nothing should hold them back, and that they would do everything like all other 'normal' people. So they leave Martha's Vineyard (the little island where they reside) behind, and ship off like two happy chipmunks in spring.

Los Angeles is where they meet April (Eva Mendes), the sexy lingerie model, who also happens to be their neighbor. Spotting the brothers' physical condition she titters 'You're stuck together'. As if 2 heads, 4 arms and 4 legs were as normal (oh, there goes that word again) as 10 fingers and 10 toes. In the same place stays May (Wen Yann Shih), Bob's cyber-pal of three years. May has no clue of the brothers' conjunction (because Bob had never mentioned it), and has a difficult time accepting this.

Stuck On You is from the same fellas who made 'There's Something About Mary', 'Shallow Hal' and 'Me, Myself And Irene'. The only difference is that in Stuck On You, the Farrelly brothers could not recreate the same formula which lends the other flicks that rib-tickling, side-splitting touch. Greg Kinnear's acting definitely deserves a mention. Matt Damon is absolutely un-Matt-Damonish in the movie. He completely fails to impress in this 2-hour long movie that manages to whimper a few laughs out of you.
Share. Save. Connect.
Tweet
STUCK ON YOU SNAPSHOT

ADVERTISEMENT
This page was tagged for
Stuck On You english movie
Stuck On You reviews
release date
Matt Damon, Greg Kinnear
theatres list
Follow @fullhyderabad
Follow fullhyd.com on
About Hyderabad
The Hyderabad Community
Improve fullhyd.com
More
Our Other Local Guides
Our other sites
© Copyright 1999-2009 LRR Technologies (Hyderabad), Pvt Ltd. All rights reserved. fullhyd, fullhyderabad, Welcome To The Neighbourhood are trademarks of LRR Technologies (Hyderabad) Pvt Ltd. The textual, graphic, audio and audiovisual material in this site is protected by copyright law. You may not copy, distribute, or use this material except as necessary for your personal, non-commercial use. Any trademarks are the properties of their respective owners. More on Hyderabad, India. Jobs in Hyderabad.