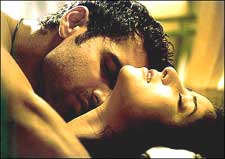 Deepa Menon / fullhyd.com
EDITOR RATING
1.0
Performances
Script
Music/Soundtrack
Visuals
NA
NA
NA
NA
Suggestions
Can watch again
NA
Good for kids
NA
Good for dates
NA
Wait to rent it
NA
People have said all kinds of horrible things about the film-going masses in India. We're escapists, we lack depth, we don't appreciate good cinema... But, fortunately, we masses don't give a rat's ass what the critics think. Because nobody, but nobody, enjoys bad cinema like we do.

Let's take the film in question - although if you'd rather not, we won't blame you. Tum Question Mark, as we like to call it, is a bad, bad movie. But then, it's so bad it's funny. Every single "intense" scene in the film causes the audience to giggle helplessly. We predict a short, but happy, future for Tum Question Mark.

Kamini (played by Manisha Cry-Me-A-River Koirala) is a loving housewife of eighteen years, who is meeting her husband in Mauritius for their anniversary. But when he turns up late for their tryst, she takes to hanging out with fashion photographer Jatin (Karan I'm-An-Actor-It-Says-So-On-My-Resume Nath), who plays an all-round nice guy till he gets Manisha drunk.

After a night of what looked from the actors' faces like extremely torturous passion, Manisha wakes up with a hangover and a stricken conscience. Then, instead of calling the police like a sensible woman who's just been raped, she decides to get all guilty and says to Karan, "We must never meet again." To which he says, "Then you leave me no choice but to ruin your happy family life."

Karan sets out earnestly to do as he promised. He phones her incessantly and asks her if they can sort of pick up from where they left off. But Manisha will have none of it, because she's a super-guilty wife-mother now, and, more importantly, sober. So to take revenge, Karan threatens to take advantage of Manisha's daughter, and given how incredibly annoying the daughter in question is, you almost feel sorry for the guy.

In the meanwhile, Isha (Netanya Is-This-Pouty-Enough-For-You Singh) is not happy about her fiancé Karan's new pin-up. The emotional scene where she asks him if he's turning into a 'Giggle-O' is priceless, and by itself worth the admission fee.

Netanya has a guy-Friday, Lalith, who has all the exaggerated mannerisms of Bollywood's idea of a gay man. Occasionally Lalith will shriek or get slightly hysterical, but otherwise he seems a nice guy. Till the very end where you find out that he's the one who killed Karan. (Oh, did we forget to mention this? Karan dies.) Horrified shock on the faces of the two members of the audience who stayed till the end.

Now some people might watch a movie like this and get depressed at the state of cinema in the country. Call us crazy, but we prefer to laugh our heads off and not press charges.

ADVERTISEMENT
This page was tagged for
Tum hindi movie
Tum reviews
release date
Manisha Koirala, Rajat Kapoor
theatres list
Follow @fullhyderabad
Follow fullhyd.com on
About Hyderabad
The Hyderabad Community
Improve fullhyd.com
More
Our Other Local Guides
Our other sites
© Copyright 1999-2009 LRR Technologies (Hyderabad), Pvt Ltd. All rights reserved. fullhyd, fullhyderabad, Welcome To The Neighbourhood are trademarks of LRR Technologies (Hyderabad) Pvt Ltd. The textual, graphic, audio and audiovisual material in this site is protected by copyright law. You may not copy, distribute, or use this material except as necessary for your personal, non-commercial use. Any trademarks are the properties of their respective owners. More on Hyderabad, India. Jobs in Hyderabad.