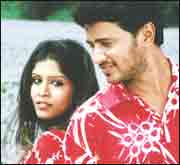 Mithun Verma / fullhyd.com
EDITOR RATING
3.0
Performances
Script
Music/Soundtrack
Visuals
NA
NA
NA
NA
Suggestions
Can watch again
NA
Good for kids
NA
Good for dates
NA
Wait for OTT
NA
A few years back there was a movie about a man and his undying love. Even though he knew that nothing could work out between them, his selfless sacrifices for his love wrenched our hearts. Man, Dr. Dolittle was something! Er, okay, hehehe, this movie isn't the remake of that movie, it seems. It's another movie where the hero's in love with an animal – Sweet November. Humans are also animals it seems, although better looking. This movie proves this beyond doubt.

Our welcome to this jungle called Kala is done by a few great apes that like wearing clothes. To avoid confusion, let's call one particularly aggressive one as the hero (Raja), and the others as his friends.

The hero has the power to make others' dreams come true. For example, if your dream was to become a judge, he would set-up a mock courtroom, give you a wig and let you live it up for a day. He wouldn't give you a hammer because he loves his head. He also takes your money for it.

But if you had the money, you could do all of that yourself, couldn't you? You're forgetting what species we're dealing with here.

We also have a female of the species in here. Let's call her the heroine, out of sheer compassion. This heroine girl is particularly averse to clothing, especially if it's on her body.

One fine day, the heroine comes with her dreams to the hero. She wants to be a heroine in Raghavender Rao's movie because women are shown with great artistry. The hero looks closely at her. Of course, this has nothing to do with technicalities, but it feels nice staring at a scantily clothed heroine. So he says yes.

During the shoot, a brinjal is dropped on the heroine's naval instead of a guava. This becomes a breach of contract. Brinjal wasn't in the menu. So now the hero has to go to Mauritius with the heroine. In case you misinterpreted the last few lines, here's the recap. Hero drops brinjal; heroine wants guava; hero doesn't have guava; heroine forces hero to go to Mauritius. Just get to the next paragraph, will you?

After getting to Mauritius, the heroine stops wearing many clothes. Primates never wear many clothes in Mauritius - don't you get Animal Planet? So basically the hero and the heroine are shedding clothes and falling in what we presume to be ape love.

Then something that's way beyond the realms of reality happens. Nothing this heinous in the history of Telugu cinema has ever happened. The heroine wears a sari before getting married.

The makers better have a good explanation for this crime. They do – she has terminal cancer. Oh, that explains the skin show alright.

Meanwhile, the hero finds out that if he can find someone with matching DNA to donate bone-marrow to the heroine, she might be saved. He does find a guy with matching DNA. But this guy is muscular, rough, hairy and evil. The heroine is soft, frail and vulnerable. Close enough! Let's do the transplant. Viola. The heroine's saved!

For the sin of going to the theater, these guys made me watch an utterly incoherent, insipid, vulgar and stupid piece of reel for three hours. But I didn't pay for the ticket. Who's the sucker, now? Who? Huh? Who?
Share. Save. Connect.
Tweet
KALA SNAPSHOT

ADVERTISEMENT
This page was tagged for
kala 2004 telugu movie
Kala telugu movie
Kala reviews
release date
Raja, Nayana Harshitha
Follow @fullhyderabad
Follow fullhyd.com on
About Hyderabad
The Hyderabad Community
Improve fullhyd.com
More
Our Other Local Guides
Our other sites
© Copyright 1999-2009 LRR Technologies (Hyderabad), Pvt Ltd. All rights reserved. fullhyd, fullhyderabad, Welcome To The Neighbourhood are trademarks of LRR Technologies (Hyderabad) Pvt Ltd. The textual, graphic, audio and audiovisual material in this site is protected by copyright law. You may not copy, distribute, or use this material except as necessary for your personal, non-commercial use. Any trademarks are the properties of their respective owners. More on Hyderabad, India. Jobs in Hyderabad.