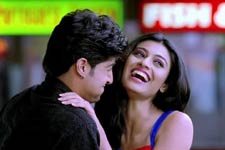 Swayamsrestha Kar / fullhyd.com
EDITOR RATING
3.0
Performances
Script
Music/Soundtrack
Visuals
5.0
3.0
4.0
5.0
Suggestions
Can watch again
NA
Good for kids
NA
Good for dates
NA
Wait for OTT
NA
There's something invariably sad about a film that has been in the cans for too long. For starters, there's the movie's name, inspired by SMS-speak, which was specifically designed to make your 6th standard English teacher burn the reverential Wren & Martin out of sheer helpless fury.

Then, there is the Josh-afflicted Goan family portrayal in the movie, where everybody - starting from the widowed father to the bustling granny - loves their daaru pani and their pork vindaloo.

We're better off not bringing up the fact that the number of people who turn up to catch the movie can be counted on the fingers of a man who has lost two thumbs, and also the fact that 2 of these people are multiplex employees who are present in the hall to show their solidarity with the miserable movie reviewer, who in turn is trying to find a comfortable position to sleep.

Oh, we must make special mention of the 1,100-something gentleman in the audience who's probably there to make moon eyes at the afore-mentioned granny and to gush at the ingenuity of a script which had probably been written when he was still pulling little-girl pigtails in the playground.

As we said before, it's all so gut-wrenchingly, heart-breakingly sad.

Luv U Soniyo is like that mutant, deformed by-product-ish child which was born out of an ungodly union between DDLJ and Chetan Bhagat's "Two States", and kept in a glass cell under close scrutiny so that it could not escape and wreck havoc on innocent minds.

Mark (Tanuj Virwani) and Soniyo (Neha Hinge) have grown up in the same neighbourhood, and are attending the same college, and are platonically friends in a way which does not stop Mark from realising, one fine day, that Soniyo is one babe that he has yet to hit on.

Soniyo, on the other hand, is all about protests, Marxism, oppression of the weak, diligent attainment of knowledge, and more diligent nodding in response to the random marriage proposal that her father drops on her.

By the end of the first half, Mark is kinda sure that he sort of might have some feelings for Soniyo, y'know. And Soniyo is perplexedly smiling at the shiny ring that Vikram (Bunty Grewal) - her army-returned handlebar-moustachioed fiance - has just slipped on her finger.

After the intermission, Soniyo decides that Mr. Handlebar is too conservative for her tastes,i .e., more conservative than her father, who only arranges her marriage without consulting her. While she's still trying to move her face muscles into an expression that remotely resembles sadness, along comes Mark.

She promptly falls in love with him, coz y'know, who would have thought of that?! And then, they plot to get the approval of their families because there's nothing Indian families love more than frowning on "love" itself.

Also, Mark's got a bunch of friends, one of whom is night-blind, and in all likelihood, acutely Iatrophobic, because he absolutely refuses to seek medical aid.

Some fleeting comic moments are provided by Suresh Menon as Kuttikaran, a Mallu goon who has a weird Hindi malapropism thing going on. Sample this - instead of asking "What's your umar (age)?", he says "What's your kamar (hip)?". And our grey cells were feeling so deprived by then that we actually latched onto that soggy act, and laughed the heck out of it.

Meanwhile, there were certain things that we couldn't help noticing. To paraphrase Sherlock Holmes - "when you have eliminated the truly boring (which, in this case, was most of it), whatever remains, however quirky or inconsequential, must be interesting." Firstly, debutant Tanuj Virwani looks uncannily like Rahul Singh, that dude from Jail.

Secondly, Neha Hinge has a weird tan, and her make-up artist didn't seem to have noticed it. Thirdly, Howard Rosemeyer's Aamir Khan impersonation is getting old, and fourthly, Bobby Darling should stop stooping to such levels.

Other things that we duly noted are that the scriptwriters seemed to have taken the jokes straight out of all the old, moth-eaten editions of Champak and Gokulam. The story meanders and drags on sluggishly. The dialogues are blander than water (and THAT takes real talent).

The choreography is best forgotten. And the screenplay must have been written by an orangutan.

To be fair, Tanuj Virwani is easy on the eyes, and does exude a kind of laid-back charm on-screen. But, he's no Ranbir Kapoor. Neha Hinge, on the other hand, is determined to look anywhere other than the camera and her co-actors' faces. There must be something fishy about her.

Luv U Soniyo was 2 and a half hours of the reviewer's life that she's never going to get back. And someone, somewhere (read - the maker of the movie) is currently hoarding up bad karma because of this.
Share. Save. Connect.
Tweet
LUV U SONIYO SNAPSHOT 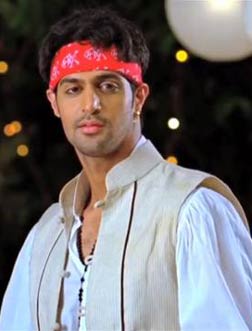 ADVERTISEMENT
This page was tagged for
Luv U Soniyo hindi movie
Luv U Soniyo reviews
release date
Tanuj Virwani, Neha Hinge
theatres list
Follow @fullhyderabad
Follow fullhyd.com on
About Hyderabad
The Hyderabad Community
Improve fullhyd.com
More
Our Other Local Guides
Our other sites
© Copyright 1999-2009 LRR Technologies (Hyderabad), Pvt Ltd. All rights reserved. fullhyd, fullhyderabad, Welcome To The Neighbourhood are trademarks of LRR Technologies (Hyderabad) Pvt Ltd. The textual, graphic, audio and audiovisual material in this site is protected by copyright law. You may not copy, distribute, or use this material except as necessary for your personal, non-commercial use. Any trademarks are the properties of their respective owners. More on Hyderabad, India. Jobs in Hyderabad.