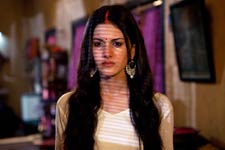 Neha Mathur / fullhyd.com
EDITOR RATING
4.0
Performances
Script
Music/Soundtrack
Visuals
4.0
4.0
6.0
6.0
Suggestions
Can watch again
No
Good for kids
No
Good for dates
No
Wait for OTT
Yes
There once lived a William Shakespeare who staged a tragedy, Romeo and Juliet. A pubescent boy and girl end up as collateral damage in the bloody feud waging between their murderous families. Issaq is a modern-day reworking of this story (a lofty project), but here, the audience ends up as collateral damage. Ah, to suffer a film as incoherent as this one!

On the face of it, Issaq belongs to a class of films, namely Maqbool and Omkara that are contemporary adaptations of the playwright's tragedies, and utilize the original plot to depict a community of homegrown feudal characters, their soil and their eternal hostilities.

The film portrays the antagonism between the Mishras and the Kashyaps, powerful local families who are attempting domination of sand-mining contracts, and in the process keeping alive the deep-rooted tradition of mutual discord.

To make matters worse, a Naxal group headed by a heartless hoodlum called "Madrasi", determined to usurp the whole business of sand-quarrying, makes use of these very familial rivalries, for its own "Lal Salaam" cause.

In the backdrop of these messy histrionics lies the tale of ill-fated lovers Rahul Mishra (Prateik Babbar) and Bachchi Kashyap (Amyra Dastur). Qayamat Se Qayamat Tak and Ishaqzaade - ring a bell? Well, the point here seems to be that a melodramatic love tragedy never grows old. Not in this country. Unfortunately, Issaq is an immature pursuit of a mature tragedy.

The first scene establishes the enmity between the Mishra and the Kashyap clans. As bombs go off and the families clash, the sports-style commentary of a local prepares the viewer for the tongue-in-cheek tone of the film. The patriarchs of the two families bicker like children, while their children lust after enemy blood in the sand battlefields.

Tiwary paints a world enthused with boiling young blood, rash and violent. The comic moments seem to subvert the macho conventions of gang warfare and inane concepts of honour. But this constant presence of humour distracts the viewer from identifying with the characters, and eventually, undercuts the very potency of the tragic elements.

The beauty of a tragedy lies not just in the struggle that the lovers face, but also in the realization that the attainment of love is impossible. With the confused script of Issaq, one does not feel the desperation. It is laid out as a Dabangg-esque world that suddenly has to transform into a wistful tragedy of epic proportions.

Speaking of epic, Vishal Sinha's evocative visuals deserve a mention. The festival of Holi - its frenzy and colour - is captured well by the camera. When our hero Rahul pursues and persuades his love interest, we are treated to a slew of images of Benaras, all beautifully composed; never overdone. The lens speaks to us (if only the rest of the film had followed suit).

This is a crowded film teeming with characters. You feel lost, as on a railway station, and if you do not remain glued to the screen you might miss the train. Most of the characters are mere shadows of real people. The lovers are more or less cardboard cutouts, and their performances verify this fact. No amount of parkour (jumping off of buildings) practiced by Rahul, or cheekiness practiced by Bachchi, can redeem them as actors. They are a good-looking pair, but that is all.

Screenwriters Padmaja-Thakore Tiwary, Manish Tiwary and Pawan Sony seem to have misfired, and that too in the fog. Though the plot remains, more or less, faithful to Shakespeare's version, the narrative does not ring true, and the people who inhabit the story are not given believable motives.

The "Lal Salaam" Naxal angle is mere tokenism, and is forced into the structure. The Naxal chieftain (Prashant Narayanan) is a soulless creature with no past.

Actor Ravi Kishan, who plays the bloodthirsty Teetas, of the Kashyap clan, tries hard to execute his role with as much malice as he can muster. Sudhir Pandey and Neena Gupta are wasted in their respective roles.

Makrand Deshpande, as the levitating mystic sadhu, salvages his character with penchant deftness. Rajeshwari Sachdev is nuanced in the role of Bachchi's stepmother, Paro, a woman who flaunts her illicit affair in the public eye.

Issaq is clumsily edited, and the transition from one shot to the next is abrupt and painful to watch. It is disjointed, as if put together hastily and without much care. The computer graphics that intrude are plain silly.

If anything saves the film, it is the music. "Issaq Tera" and "Jheeni Re Jheeni" are affective melodies that infuse life into the otherwise famished script. "Aag Ka Dariya" does a decent job of introducing the hero to the audience.

In the spirit of borrowing, we quote from Romeo and Juliet,
"For never was a story of more woe,
Than this of Juliet and her Romeo." 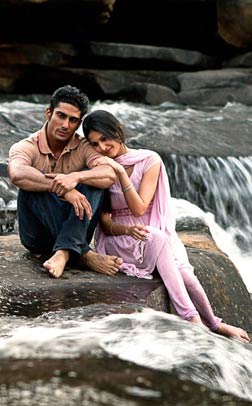 ADVERTISEMENT
This page was tagged for
Issaq hindi movie
Issaq reviews
release date
Prateik Babbar, Amyra Dastur
theatres list
Follow @fullhyderabad
Follow fullhyd.com on
About Hyderabad
The Hyderabad Community
Improve fullhyd.com
More
Our Other Local Guides
Our other sites
© Copyright 1999-2009 LRR Technologies (Hyderabad), Pvt Ltd. All rights reserved. fullhyd, fullhyderabad, Welcome To The Neighbourhood are trademarks of LRR Technologies (Hyderabad) Pvt Ltd. The textual, graphic, audio and audiovisual material in this site is protected by copyright law. You may not copy, distribute, or use this material except as necessary for your personal, non-commercial use. Any trademarks are the properties of their respective owners. More on Hyderabad, India. Jobs in Hyderabad.