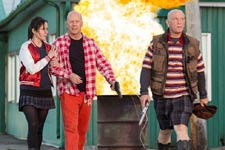 Nupur Barua / fullhyd.com
EDITOR RATING
6.5
Performances
Script
Music/Soundtrack
Visuals
8.0
6.0
6.0
7.0
Suggestions
Can watch again
Yes
Good for kids
No
Good for dates
Yes
Wait to rent it
No
The original RED, an acronym for "Retired, Extremely Dangerous", was just the beginning of a franchise. The Hoeber brothers, Jon and Erich, adapted the story from the comic book series by Warren Ellis and Cully Hamner, and gave us, almost 3 years ago, the story of retired CIA and other operatives, who miss their old life and want to relive some action again. RED 2 continues from where the first one finished, and re-introduces us to Frank Moses.

As in the first movie, former CIA agent Frank Moses (Bruce Willis) is trying to lead a normal, violence-free life. He is married to Sarah Ross (Mary Louise-Parker), who was once a customer service agent but now loves the idea of being at least an assassin (or something equally adventurous).

Although the couple tries to blend in with the rest of society and go about their dull routine life, Marvin Boggs (John Malkovich), Frank's ex-colleague and conspiracy theorist with delusions of destruction, catches up with them at a supermarket. Apparently, the CIA wants to eliminate Frank, and his chance of survival depends on his finding a missing nuclear weapon.

There are two assassins trying to kill Frank - one is the cold-blooded super shot Han (Lee Byung-Han), and the other is Frank's ex-colleague, Victoria (Helen Mirren). Both race against each other to get to their target. Frank then gets into action and runs to Europe, chasing a trail, where they encounter more spies, retired and active.

As they all traipse through Europe, you cannot help but marvel at the audacity with which these senior characters make younger spies look ridiculous. With a little bit of Bourne here and there, and plenty of James Bond, the retired bunch of operatives literally kick ass, and will not let any idiot stand in their way. Cold-blooded and professional they may be, but you can feel the depth of their bonds with one other, even if they are on differing sides.

The themes of the movie include loyalties, ethics, old ties, fidelity, and the burning desire to save the world. So even when the going gets really tough, you know that good will triumph over evil, but will have a lot of fun doing that, too.

The humour in the movie is a notch above the previous one. It feels less forced, although there are enough redundant lines.

Some of the situations lack the finesse in scripting, and it sometimes seems like most of the sequences are just placed in a certain order, for the sake of convenience, or to move the story forward. In other words, there are holes the size of your fist in the plot and the sub-plots, but you play along and give in to the fun-filled mood of the moment, because that is the whole idea of the movie - not to take things seriously, not even the threat of world destruction.

Bruce Willis looks a little jaded, but he still displays the skills of an action actor. And he has a lot of fun doing it, from the look on his face.

Mary Louise-Parker has a meatier role this time - she actually participates in the action, and loves it. Catherine Zeta-Jones plays the sexy Katya to perfection, complete with having the hots for Frank and not caring who knows it. Sarah and Katya are natural-born rivals, and their interactions with and reactions to each other offer comic relief when the action gets too heavy.

Helen Mirren is a dame, literally, too. She spoofs her own roles from previous movies with a poker face, and is easily the brightest star in the ensemble cast. Almost.

Her toughest competition is John Malkovich. Playing the paranoid, cuckoo ex-CIA agent, he could have easily gone OTT, but desists, thus giving us a character that is not only loveable, but also memorable. Another cuckoo character is the one Anthony Hopkins plays, and he has a blast doing it.

RED 2 is an action movie, and you will witness the mandatory violence and explosions. However, it never gets too serious, so that is a relief.

Cinematography is terrific, but that may have to do with most of the outdoor scenes being shot in Canada (set up to look like Europe). The film has some old-world charm, too, thanks to constant references to the Kremlin, for example. Production design scores in making these settings more believable.

If sources are to be believed, there is a third installment in this franchise - the Hoeber brothers have already begun work on the same. We just hope they do not wait another three years before they release Part 3, so that they do not have to begin the movie with a slow set-up/recap for all those who forgot or missed the previous film.

Watch RED 2 if you are a Bruce Willis fan, but definitely watch it even if you are not, because the tried and tested gags and the action are worth sitting through. Just do not expect a fresh take on spy movies, and you will enjoy it.
Share. Save. Connect.
Tweet
RED 2 SNAPSHOT 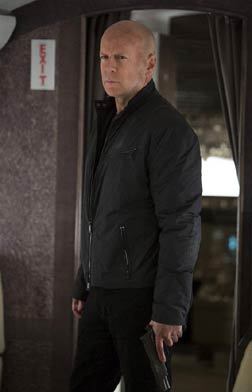 ADVERTISEMENT
This page was tagged for
Red 2 english movie
Red 2 reviews
release date
Bruce Willis, John Malkovich
theatres list
Follow @fullhyderabad
Follow fullhyd.com on
About Hyderabad
The Hyderabad Community
Improve fullhyd.com
More
Our Other Local Guides
Our other sites
© Copyright 1999-2009 LRR Technologies (Hyderabad), Pvt Ltd. All rights reserved. fullhyd, fullhyderabad, Welcome To The Neighbourhood are trademarks of LRR Technologies (Hyderabad) Pvt Ltd. The textual, graphic, audio and audiovisual material in this site is protected by copyright law. You may not copy, distribute, or use this material except as necessary for your personal, non-commercial use. Any trademarks are the properties of their respective owners. More on Hyderabad, India. Jobs in Hyderabad.