Made In Vizag Review 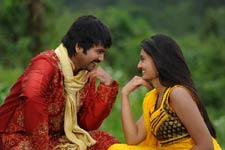 Kritika Deval / fullhyd.com
EDITOR RATING
4.0
Performances
Script
Music/Soundtrack
Visuals
6.0
4.0
6.0
6.5
Suggestions
Can watch again
No
Good for kids
No
Good for dates
No
Wait to rent it
Yes
As the opening credits start, along with them starts a song. This ballad to Visakhapatnam and its wonders is so loud and strident that you start to worry if you've got yourself stuck in some pseudo-political stuff. Then, the movie begins, and you sort of wish you were.

What it is, instead, is a love story so lukewarm that you wonder how it managed to happen at all. An adaptation of Marathi rom-com Mumbai Pune Mumbai, Made In Vizag tails the tale of two young people, let's call them Hyderabad (Nikitha Narayan) and Vizag (Yashwin), as they discover Visakhapatnam and each other.

Sounds fascinating, right? Well, it should've been. Only, it ended up being a very boring tour of the lovely, lovely city, interspersed with cheesy revelations, hammy soul-searching and crooked auto drivers. "Hyderabad" is a girl from, well, Hyderabad, who has come to Vizag (the city) to break off an engagement as she doesn't believe in arranged marriages. However, a series of unfortunate events leave her without a mode of contact.

That's when she bumps into Vizag (the person) (note to reader: we have refrained from mentioning the names of our protagonists, not because we forgot, but because we feel it would count as a spoiler. Don't ask us how. Our good deed for the day is giving the movie a quarter of a chance by giving you at least one reason to watch it.), who takes it upon himself to prove to her that the beloved fishpond is not really brimming with hicks and crooks, as the city girl seems to think.

And so, they roam around every Visakhapatnam clich??‚Â© as they verbally battle it out as to which is better, Vizag or Hyderabad (seriously? Dude, seriously? *one eyebrow raised in sardonic amusement*), while she tries awfully hard to get in touch with the fianc??‚Â© she really wants to get rid of. And, after about 10 minutes of the same, you sort of wish you'd taken two tickets at Usha Mayuri so you could sprawl yourself on the twin seats in the theatre (probably the only theatre left in Hyderabad with twin seats - couples, take note).

It is a boring movie with boring characters who look boring and do boring things. There is no two ways about it. Which is rather sad, because the story is one with a lot of potential. Right from its beginning to its rather 'O Henry-esque ending (spoiler alert - minus the tragicomedy, of course), Made In Vizag is a story we would've loved to have read in short story form.

But, since it was rendered on screen in this utterly bland manner, let us tell you that everything from the performances by the lead pair to the music is utterly uninspired and, at times, jarring. The camera-work makes you weep at the way it makes the utterly gorgeous city look like a faded postcard.

The only reasons for you to watch this one would be a few scenes with Venu Madhav in them, and the aforementioned twist. Apart from that, you're good right at home.
Share. Save. Connect.
Tweet
MADE IN VIZAG SNAPSHOT 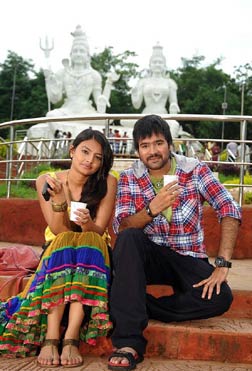 ADVERTISEMENT
This page was tagged for
made in vizag
Visakhapatnam city girls
Made In Vizag telugu movie
Made In Vizag reviews
release date
Follow @fullhyderabad
Follow fullhyd.com on
About Hyderabad
The Hyderabad Community
Improve fullhyd.com
More
Our Other Local Guides
Our other sites
© Copyright 1999-2009 LRR Technologies (Hyderabad), Pvt Ltd. All rights reserved. fullhyd, fullhyderabad, Welcome To The Neighbourhood are trademarks of LRR Technologies (Hyderabad) Pvt Ltd. The textual, graphic, audio and audiovisual material in this site is protected by copyright law. You may not copy, distribute, or use this material except as necessary for your personal, non-commercial use. Any trademarks are the properties of their respective owners. More on Hyderabad, India. Jobs in Hyderabad.