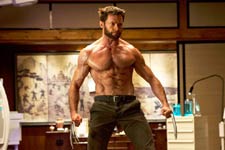 Swayamsrestha Kar / fullhyd.com
EDITOR RATING
6.0
Performances
Script
Music/Soundtrack
Visuals
6.0
5.0
6.0
7.0
Suggestions
Can watch again
Yes
Good for kids
No
Good for dates
No
Wait to rent it
Yes
A Wolverine is not in the same league as a Batman, a Superman or an Iron Man. The first is an orphaned millionaire with cool gadgets and a batmobile. The second one is an alien with cool powers. The third is a rakish businessman millionaire with a fancy exoskeleton that keeps getting fancier add-ons (like it was some Apple app).

The Wolverine, on the other hand, hasn't got much going on for him in the glamour category. Adamantium claws and healing powers aside, he's neither your typical samaritan, nor the advanced-weapon-totting renegade. He's someone who was born before the World Wars, in an age when chivalry came naturally to men, and with it came the need to look at every woman as a damsel in distress.

He's a wounded man without a family, and is someone who's not waited upon by a suave butler. We would go as far as to say that he's got the soul of a brooding romantic - one who used to be on the side of the system, but has, over the years, been disillusioned enough to turn into a desperate anti-hero; as compared to the recent generation of vigilantes, who know, from the start, that the system is flawed. Wolverine is unique. And we, the fans, know it well, and love him for it.

So, when a film aspires to portray all these facets of a character who stands out in the club of superheroes like a cowboy, in his dusty leather boots, would stand out in a room full of slick James Bond-esque heroes, we have high hopes. Sadly, the movies on Wolverine have failed us so far.

Let us say, right here, that the director of The Wolverine 3D, James Mangold (of "Walk the Line" fame), tries hard. Which is why, this film does end up being better than the last umm... crapfest that people tried to pass off as a Wolverine movie. We just wish that he had invested as much heart and soul into this one as he had done with his Johnny Cash biopic.

The film begins with the Nagasaki bombing, when Wolverine a.k.a. Logan (Hugh Jackman) saves a Japanese soldier Yashida (Haruhiko Yamanouchi) from the mandated Harakiri, as well as from the nuclear bomb that follows soon after (in the most ridiculous way possible). The movie then cuts to the present, which is presumably after the events of X-Men: The Last Stand, where Wolverine had killed his beloved Pheonix-possessed mutant Dr. Jean Grey (Famke Jannsen).

In the present, Logan has holed himself up in a cave somewhere in the forests of what looks like Alaska, and has turned into a caveman who befriends grizzly bears. It is here that he's tracked down by a young Japanese girl Yukio (Rila Fukushima), and is told that she has been sent by Yashida (who is on his death-bed) to escort Logan to Japan, so that Yashida can bid his old-time rescuer adieu before the grim reaper comes for him.

When Logan meets Yashida, the latter reveals that he has means to rid Logan of his immortality - something that Logan has always struggled with. The dying man (who has built a vast business empire while Logan was out frolicking with Professor Xavier & Co, and saving the world once in a while) wishes to acquire Logan's power of self-healing so that he can fight the cancer that is fast claiming his body.

How we wish we could agree. While the story is straight-forward, unlike the sub-plot-ridden premise of the earlier Wolverine film, the execution comes in the way of what could have been a fast-paced yet poignant venture, whereby our bestial Heathcliff-like hero fights bad guys while protecting the fair maiden (Mariko), and at the same time, struggles to cope with his new-found physical weakness. There's a blockbuster of a plot right there guys, how could you have missed it so expertly?

First of all, the 3D is wasted. The chase scenes, especially one which takes place on the roof of a bullet train in Japan, could have looked stellar, had the 3D been properly utilised.

Then, there are the dialogues. Have you forgotten, screenplay writers extraordinaire, that the Wolverine is all about terse one-liners? He's like a restrained wolf, and one that need only let out a low, throbbing growl every now and then, to make the bad guys wish that they had stayed at home and played Mario games.

Unfortunately, here, the wolf gets to "woof" a little, and that too, in passing. Also, the plot leaves a lot of loose ends. If not logic, then we'll settle for some form of closure. Alas, even that evades us!

The action scenes are a notch better. Here, we have a guy who only has his claws as his weapon - no Titanium/hybrid Carbon-Iron alloy suit a la Tony Stark, no Bruce-Wayne-esque utility belt, and no X-ray vision. And the fight scenes, to their credit, highlight that reckless courage with which Logan rushes at his enemies.

Hugh Jackman is Wolverine. Period. He's got the scowl, the insane body, even the chest-hair down pat. If only, the writers gave him more one-liners. Rila Fukushima does well as Yukio, while Tao Okamoto just looks lost.

In the end, all we can say is that our Wolverine deserves a better movie. And, that our patience is running thin.
Share. Save. Connect.
Tweet
THE WOLVERINE (3D) SNAPSHOT 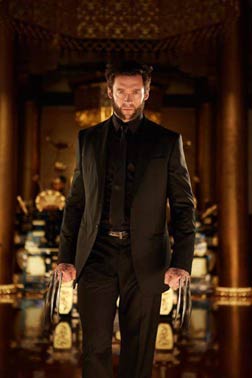 ADVERTISEMENT
This page was tagged for
The Wolverine (3D) english movie
The Wolverine (3D) reviews
release date
Hugh Jackman, Rila Fukushima
theatres list
Follow @fullhyderabad
Follow fullhyd.com on
About Hyderabad
The Hyderabad Community
Improve fullhyd.com
More
Our Other Local Guides
Our other sites
© Copyright 1999-2009 LRR Technologies (Hyderabad), Pvt Ltd. All rights reserved. fullhyd, fullhyderabad, Welcome To The Neighbourhood are trademarks of LRR Technologies (Hyderabad) Pvt Ltd. The textual, graphic, audio and audiovisual material in this site is protected by copyright law. You may not copy, distribute, or use this material except as necessary for your personal, non-commercial use. Any trademarks are the properties of their respective owners. More on Hyderabad, India. Jobs in Hyderabad.