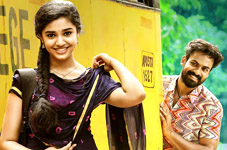 Anil Bandhakavi / fullhyd.com
EDITOR RATING
6.0
Performances
Script
Music/Soundtrack
Visuals
6.5
5.0
5.5
7.0
Suggestions
Can watch again
No
Good for kids
No
Good for dates
Yes
Wait to rent it
Yes
Things get a little hazy around the topic of dignity. In most, if not all, cultures, a man's dignity is a measure of his worth. But how far must he go to protect his dignity? Must he choose his dignity over the well-being of his loved ones?

The aforementioned idea is what forms the backbone for the film Uppena. Written and directed by Buchi Babu Sana, Uppena explores the lengths to which Raayanam (Vijay Sethupathi) will go to uphold his dignity, including trampling his own daughter's love life and snatching her lover's manhood.

Bebamma (Krithi Shetty), whose proper name is Sangeetha, is Raayanam's overprotected daughter. This protection, however, hardly comes from a place of fatherly love. Ironically, it is a consequence of Raayanam's regret that a daughter, as opposed to a son, can casue way more damage to the family's image if her behaviour were ever to be questioned by society. As a result, she is strictly monitored in her every move.

Aasi (Panja Vaisshnav Tej) is the son of a humble and hardworking fisherman in the coastal village of Uppada. Ever since he was a kid, Bebamma occupied his fancies, a fact completely beyond the realm of her knowledge. Aasi seems happy keeping Bebamma in his thoughts, perhaps the result of an understanding that a man of his class stands no chance with a girl like her, the daughter of a wealthy owner of fisheries on the local coasts.

Aasi often prevails in fights involving territorial disputes with fishermen from the neighbouring village. One day, when Bebamma is on her way to college, she spots Aasi in the throes of a brawl. Often harassed by her cousin who desires to marry her, and upset that Raayanam does nothing about it, she's wishing for a man who will fight for her in such instances, and is completely taken in when one of Aasi's punches accidentally lands on her cousin who is hustling her right then. Aasi takes notice of her admiration and is crushed by it, and they are soon in love.

Meanwhile, Raayanam is in the process of displacing the fishermen of the village of Uppada to set up a massive fishing yard. Aasi's father takes the lead on pleading with Raayanam that the takeover is unfair. During this process, Raayanam learns about his daughter's affair with Aasi. In a fit of rage, Raayanam kills Aasi's father, while Aasi and Bebamma escape town.

Following Bebamma's elopement, to uphold his dignity in the village, Raayanam forces the people of his household to continue to behave as though she is still in town, to prevent any doubts in the villagers' minds. For example, he continues to send an empty vehicle into college to drop off and pick her up, and asks of the teachers to reserve a classroom for her and teach to the empty classroom. Raayanam's men continue search efforts to quickly bring Bebamma home, so that things can be brought back to normal. However, there is a dark twist that can make or break Raayanam's iron fist control over his very own loved ones.

There is constant familiarity in the experience of Uppena. The story utilizes all the standard tropes that have been played out again and again in stories covering the struggles to make love work. A poor boy falls in love with a rich man's daughter, the rich man cannot accept the knock on his pride, the couple elopes, and love finally prevails. Even the conclusion, albeit capable of extracting a tear or two, is quite conventional.

However, the execution makes up for some of those sins. The movie is an unadulterated romantic drama that pleases the eye with its clean visuals and expertly-tailored cinematography. There is an innocence that's expected in Aasi's and Bebamma's characters that is captured well in commendable performances by Panja Vaisshnav Tej and Krithi Shetty respectively. And Vijay Sethupathi predictably executes the work of a professional in his portrayal of the gravity in Raayanam's imposing character. Musically, too, the film delivers enjoyable tunes, even if nothing you haven't heard before.

Still, from a creative standpoint, you find yourself wishing that Buchi Babu & co had taken a risk and pioneered a new narrative. Even the casual moviegoer would secretly desire for their world to be shaken up a little. Instead, you just leave with an experience you've had numerous times - it's just that you still won't ask for your money back.
Share. Save. Connect.
Tweet
UPPENA SNAPSHOT 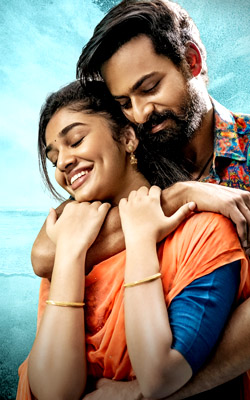 ADVERTISEMENT
This page was tagged for
Uppena telugu movie
Uppena reviews
release date
Panja Vaisshnav Tej, Krithi Shetty
theatres list
Follow @fullhyderabad
Follow fullhyd.com on
About Hyderabad
The Hyderabad Community
Improve fullhyd.com
More
Our Other Local Guides
Our other sites
© Copyright 1999-2009 LRR Technologies (Hyderabad), Pvt Ltd. All rights reserved. fullhyd, fullhyderabad, Welcome To The Neighbourhood are trademarks of LRR Technologies (Hyderabad) Pvt Ltd. The textual, graphic, audio and audiovisual material in this site is protected by copyright law. You may not copy, distribute, or use this material except as necessary for your personal, non-commercial use. Any trademarks are the properties of their respective owners. More on Hyderabad, India. Jobs in Hyderabad.