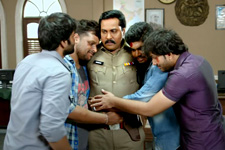 Anil Bandhakavi / fullhyd.com
EDITOR RATING
2.0
Performances
Script
Music/Soundtrack
Visuals
2.0
2.0
2.0
2.0
Suggestions
Can watch again
No
Good for kids
No
Good for dates
No
Wait to rent it
Yes
It's hard to start a discussion around Jai Sena if the objective of the analysis is to figure out what went wrong. There is nothing novel or intricate in the concept of the film, which stresses the importance of social activism by our nation's youth to protect our farmers against corrupt politicians. In essence, the film is about the importance of protecting the interests of the weaker members of society. While this is a very important political stance, it cannot carry the weight of providing entertainment value all by itself.

Sometimes movies that don't make sense at the time of their release become cult classics later on, because people with a great eye for creativity manage to find the underlying excellence which was not initially obvious, or simply because the movies manage to somehow be interesting in spite of not scoring high in any particular category. It seems unlikely but it might just be a wild possibility to entertain, that the same will happen with this film, which at times comes off like some kind of twisted satire, making you wonder if that was deliberate. The movie in some ways is a long campaign ad for Pawan Kalyan's Jana Sena Party, as footage of him at rallies is used to create a fictional leader for a so-called Jai Sena party, whose core tenet is to fight for the nation's farmers.

The film follows four playful college students who are very close friends. Suddenly, with no obvious stimulus other than that one of them comes from a family of farmers who face difficulty sending him money for his college fees, they decide to become social activists. They plan a heist to steal money from a corrupt politician in order to use that money to bribe the same politician to launch an irrigation project that would greatly benefit the farmers. The film takes you through the drama that ensues as these students try to navigate their way to achieving their goal.

Much of the movie is a flashback that is being conveyed by one of the students, who's a hostage on the run, to Meka Srikanth's character who just pops up with no backstory. Sunil plays an upright police officer who drinks on the job and ruthlessly goes after criminals, but it often seems like he's doing the right things for the wrong reasons. This was probably an element of misdirection that gets lost in the mishmash of other details that play out in no meaningful sequence, and with no compelling purpose.

There is also another upright character played by Srikanth (the Tamil actor), whose backstory is that he fights for justice (he's introduced breaking up a Nigerian cybercrime ring), and is an expert hacker. He's got a couple of short scenes and one long and ardent monologue about the importance of standing up for our farmers, with a poster of Che Guevara in the background. You almost wonder why he's in the film, but he's actually required for the story to make sense in the end.

There is also a lot of humour that's attempted which makes you wonder whether the movie is actually a comedy. The Principal of the college ("30 Years" Prudhvi) is introduced as a character who loans out money to students in order to make income on their interest payments. There are other moments where the intention might not have been humour but which still make you shake your head and giggle in a state of slight confusion - like when the students start agreeing from time to time about some kind of Jai Sena hotline.

It might be the case that the writer wanted to wrap a very serious message or agenda in a consumable shell, but ended up delivering a story that wildly juxtaposes cheap jokes against an ongoing noble fight for the underprivileged. Also, the screenplay is all over the place with events, even crucial ones, being thrown around haphazardly and as though they were trivial. There is also a completely unnecessary item number with one of the four boys and a girl from the college - which might've been the writer's way of conveying that he's the hero of the story.

At times, the movie feels like one of those internet memes in which a student responds to questions on an exam with nonsensical but witty answers that would have the teacher fall off their chair laughing, but where the student still receives a failing grade because ultimately it was not the right answer. Similarly, while I am almost tempted to go back and watch this movie, which felt like a satirical take on action-packed political dramas, again, and even recommend it for its delusional execution, it scores very low on a traditional marksheet.
Share. Save. Connect.
Tweet
JAI SENA SNAPSHOT 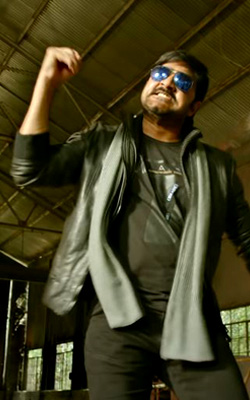 ADVERTISEMENT
This page was tagged for
Jai Sena telugu movie
Jai Sena reviews
release date
Meka Srikanth, Srikanth
theatres list
Follow @fullhyderabad
Follow fullhyd.com on
About Hyderabad
The Hyderabad Community
Improve fullhyd.com
More
Our Other Local Guides
Our other sites
© Copyright 1999-2009 LRR Technologies (Hyderabad), Pvt Ltd. All rights reserved. fullhyd, fullhyderabad, Welcome To The Neighbourhood are trademarks of LRR Technologies (Hyderabad) Pvt Ltd. The textual, graphic, audio and audiovisual material in this site is protected by copyright law. You may not copy, distribute, or use this material except as necessary for your personal, non-commercial use. Any trademarks are the properties of their respective owners. More on Hyderabad, India. Jobs in Hyderabad.