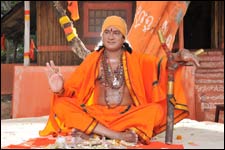 Deepa Garimella / fullhyd.com
EDITOR RATING
5.0
Performances
Script
Music/Soundtrack
Visuals
8.0
5.0
7.0
7.0
Suggestions
Can watch again
No
Good for kids
Yes
Good for dates
Yes
Wait to rent it
Yes
Ayyare is no commentary on self-styled godmen (and neither does it seem to be about the life and times of Swami Nityananda), but it is a story that makes you think over the conventional cynics' approach to fake swamis: if faith is merely a placebo, is that such a bad thing? If the object of your faith were indeed non-existent, does that change the difference the faith has made to your life?

Then again, Ayyare does not offer an analysis of the subject. Instead, uses it as a backdrop to tell a simple story about a self-styled swami - a story that, by the way, does not demean the idea of faith itself. Beginning with the love problems of auto mechanic Venkatesam (Sivaji) and rich kid Anjali (Anisha), the plot moves to a twist that involves a person called Prasad (Rajendra Prasad).

Revealing anything more would be unjust to the film, but suffice it to say that things get curiouser and curiouser, before winding up in a predictable climax. Meanwhile, Venumadhav, Srinivas Reddy and Ali appear in a few funny bits.

This is no extraordinary movie, and does not have mass appeal (which is the reason it gets the 5/10 rating), but it sure is a writer's film. The scenes are decently-conceptualized, and there are some good, intelligently-written dialogues to smile over - including humour by the comedians. While Venkatesam's love story is unimaginative, Prasad's journey to swami-hood is peppered with interesting lines in the narrative.

There's one other observation - the plot is filled with people cheating one another. Not that it puts you off, but it certainly seems strange that the makers let go of an opportunity to infuse more goodness into the script.

That said, this is a semi-comedy, and the mood doesn't make you wish you were watching something else. Ayyare may not be an entirely commercial movie, but it doesn't restrict itself to the cerebral crowd alone.

The writing is helped by all the three main actors in the movie - Rajendra Prasad, Sivaji and Saikumar. It is wonderful to watch Rajendra Prasad in roles like these, and the elegance he lends to them with his theatrical style is matched by few in his peer group (Naresh is one other artiste who comes to mind).

Sivaji is talented, of course, and he needs to be around in more movies. Saikumar's voice is as awe-inspiring as ever, but his role lacks punch. The heroine, meanwhile, lacks screen presence.

Ayyare's music is something else that must be appreciated. The songs are situational, with meaningful lyrics, and fusion and semi-classical tunes dominate the music. The item song is entertaining, too. And overall, the cinematography has a neat, bright look to it.

Ayyare is not the best film that could have been made with the resources it has, but certainly one that deserves more visibility for its sheer spirit and honesty. You could watch it if you're looking for something offbeat.
Share. Save. Connect.
Tweet
AYYARE SNAPSHOT

ADVERTISEMENT
This page was tagged for
Ayyare telugu movie
Ayyare reviews
release date
Rajendra Prasad, Sivaji
theatres list
Follow @fullhyderabad
Follow fullhyd.com on
About Hyderabad
The Hyderabad Community
Improve fullhyd.com
More
Our Other Local Guides
Our other sites
© Copyright 1999-2009 LRR Technologies (Hyderabad), Pvt Ltd. All rights reserved. fullhyd, fullhyderabad, Welcome To The Neighbourhood are trademarks of LRR Technologies (Hyderabad) Pvt Ltd. The textual, graphic, audio and audiovisual material in this site is protected by copyright law. You may not copy, distribute, or use this material except as necessary for your personal, non-commercial use. Any trademarks are the properties of their respective owners. More on Hyderabad, India. Jobs in Hyderabad.