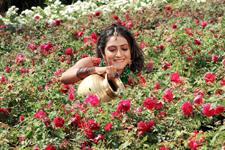 Kritika Deval / fullhyd.com
EDITOR RATING
2.0
Performances
Script
Music/Soundtrack
Visuals
2.0
2.0
2.0
2.0
Suggestions
Can watch again
No
Good for kids
No
Good for dates
No
Wait to rent it
No
Let us tell you a vintha katha now. There was a sad poet boy (Vijay), and there was a sad Inter pass girl (Priyanka Rao). They study together. They look sad while proclaiming their joy in each other's company together. They look sad while falling in love. Then college is over, and they have to go home. They go home sad. But nobody notices, because that's what they're like all the time. They sadly tell their sad story of theirs sad love to their surprisingly normal friends, who listen to the whole sad spiel without killing themselves or the sad lovers. Well, good for them. Or not.

Then the sad lovers, whilst looking into a sad, sad distance... wait! You're still reading? What is wrong with you? Really, how bored are you, man?

OK, fine. Just to keep you from killing yourself over whatever has you so jobless, we'll tell you another story. There was a sad boy and a sad girl who went around pissing people off with how sad they were. One day, a Puritan from Salem, 1692, shows up, and notices that they both have marks of the devil stamped on their foreheads.

You see, everyone else had an inkling that souls so sad could only be spawned of hell fire. But only the Puritan could see the marks because he was so used to them.

Once the girl and the boy decided to move out of their villages in especially plastic-y areas of Ramoji Film City, the Puritan figures that it's time to rid the world of their dastardly sort once and for all.

He tries, unsuccessfully, to have them meet. Meanwhile, the sabordemic is spreading, as evinced by the symptoms on whoever is in the vicinity of the sadness carriers - a lack of expression, and horrible lip sync.

And now the sad boy has gone and become a song-writer so he can spread sadness over long distances. The girl just has to exist.

Finally, through machinations too complex even to comprehend, let alone describe, he gets them together in one room.

And then he says to them, "Two men walk into a bar... ". Suddenly, there's an explosion. The sad souls have blown up their own ears, and have bled to death.

And everyone else lived happily ever after.

Feel better? Now, as far as the movie is concerned, we just brought you back from the brink of the frying pan and you want to step into the fire?
Well, up to you. We'll pick it up where we left off.

So, yeah, both our sad souls are pining away for each other when they realise they have to do something with their lives in the meantime. Our heroine is persuaded to go to Hyderabad, from her little village next to Vizag, by her jeans-wearing, with-boyfriend-living best friend.

Off she goes looking for a job in the big bad city, where she ends up living in her friend's boyfriend's humongous bungalow along with four other girls. Much fuss is made over her langa voni, and her long braid is summarily chopped off.

Looking for a job, however, turns into a hazardous venture, as this babe-in-the-woods' first prospective employer turns out to be something of a wolf in a coyote's hide.

While our heroine is off battling evil intentions upon her lissome person, our hero is equally busy working at a Telugu publishing house, making money for the company with situational songs for novels.

The rest of this excruciatingly imbecilic film as all about how they finally meet each other again, never to part, with a whole bunch of unconnected people to hack out ragged strings to connect their lives.

We have no idea where they found their lead actors, but we guess they found them in a place where you make money off of mourning for other people. The few instances where they had to smile were so awkward that we were downright indignant they were made to do it at all. Don't be fooled by the list of veterans mentioned in the cast list. We're absolutely sure they were replaced by cardboard copies of themselves, and that they're actually tied to wooden chairs in some deserted basement right now, being made to watch this film over and over again.

The whole movie looks like a particularly bad rendition of a particularly bad Telugu soap opera. The dubbing had us so confused that it took us a long time to realise that this is an actual Telugu film, rather than a Tamil or a Malayalam one dubbed into Telugu. And the music sounds like the cries of someone's tortured soul, but only if that someone is tone deaf.

Trust us on this one, you don't want to make the effort of going out and watching this one. If you do, we'll know what you are. We'll find you. We'll hunt you down. And we'll tell you... A JOKE.
Share. Save. Connect.
Tweet
VINTHA KATHA SNAPSHOT 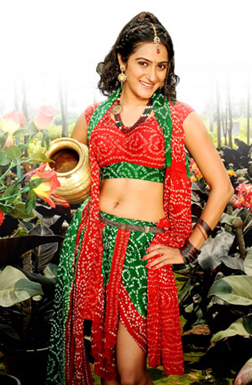 See Vintha Katha full details
VINTHA KATHA USER REVIEWS
1 - 1 OF 1 COMMENTS
POSITIVE  |  NEGATIVE |  NEWEST  |  OLDEST  |  MOST HELPFUL  |  LEAST HELPFUL
mr V on 7th Jan 2014, 12:27pm | Permalink
I should touch your feet !
seriously
in first two paragraphs I felt bad, "why this reviewer is mocking a film and its makers , they might have their own intentions"
down to 3rd , I felt , " may be this reviewer doesnt have a life than wasting time to go to such movies and get hurt and venting out the frustration here"
and 4th.."okay the reviewer is doing his job , and he is being sincere about it. bravo"
5th..i couldnt continue reading and not able to imagine what kind of experience you might have underwent to watch it and then write about it !
i always loved fullhyd because here I find reviews of ANY film which all other websites ignore.
Writing a review is respecting a film.
though its your job , it takes great courage and dedication to continue this.
I am a film-maker ( NOT AT ALL RELATED TO THIS FILM )and I wish every reviewer is like this.
Respect.
LEAVE A COMMENT
fullhyd.com has 700,000+ monthly visits. Tell Hyderabad what you feel about Vintha Katha!
MORE MOVIES
Latest Reviews
Madam Chief Minister
Red (Telugu)
Master (Tamil)
Master - 2021
Krack
more
12 O Clock
Solo Brathuke So Better
Bloodshot
Angrezi Medium
Baaghi 3
Palasa 1978
Sonic The Hedgehog
Kanulu Kanulanu Dhochaayante
Thappad
Kannum Kannum Kollaiyadithaa...
Contemporary Reviews
1 Nenokkadine
Dedh Ishqiya
Yaariyan
Yevadu
Karle Pyaar Karle
more
American Hustle
Carrie
47 Ronin (Telugu)
47 Ronin (Hindi)
47 Ronin
47 Ronin (3D)
The Secret Life Of Walter Mi...
The Wolf Of Wall Street
Mr. Joe B Carvalho
Random Reviews
Signs
Moodu Simhaalu
Aanandam
Muskaan
Itlu Sravani Subrahmanyam
more
Kitha Kithalu
Fanaa
Hello (Hindi)
Kasko
Black Swan
SMS
Lakshmi Raave Maa Intiki
Aligarh
Meda Meeda Abbayi
Airaa (Tamil)
SEARCH MOVIES
Dissatisfied with the results? Report a problem or error, or add a listing.
ADVERTISEMENT
SHOUTBOX!
{{todo.name}}
{{todo.date}}
[
ip{{todo.ip}}
]
{{ todo.summary }}... expand »
{{ todo.text }} « collapse
First  |  Prev  |   1   2  3  {{current_page-1}}  {{current_page}}  {{current_page+1}}  {{last_page-2}}  {{last_page-1}}  {{last_page}}   |  Next  |  Last
{{todos[0].name}}

ADVERTISEMENT
This page was tagged for
Vintha Katha telugu movie
Vintha Katha reviews
release date
Vijay, Priyanka Rao
theatres list
Follow @fullhyderabad
Follow fullhyd.com on
About Hyderabad
The Hyderabad Community
Improve fullhyd.com
More
Our Other Local Guides
Our other sites
© Copyright 1999-2009 LRR Technologies (Hyderabad), Pvt Ltd. All rights reserved. fullhyd, fullhyderabad, Welcome To The Neighbourhood are trademarks of LRR Technologies (Hyderabad) Pvt Ltd. The textual, graphic, audio and audiovisual material in this site is protected by copyright law. You may not copy, distribute, or use this material except as necessary for your personal, non-commercial use. Any trademarks are the properties of their respective owners. More on Hyderabad, India. Jobs in Hyderabad.