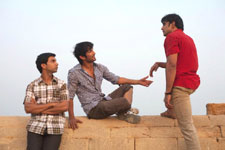 Ravi Kandala / fullhyd.com
EDITOR RATING
7.0
Performances
Script
Music/Soundtrack
Visuals
7.0
7.0
7.0
7.0
Suggestions
Can watch again
Yes
Good for kids
Yes
Good for dates
No
Wait for OTT
No
The era of multiplex films is well and truly here to stay. And one good thing this era is doing is giving the fringe players a true chance. A film like Kai Po Che, with small names and no item numbers or other gimmicks, would never otherwise have stood a chance against something like Zila Ghaziabad, with its item numbers and mass heroes.

Kai Po Che is heartwarming in its earnestness. Everyone - the director, actors, technicians et al - put a lot of heart into this one, and we are glad to say it all pays off.

The film is about the highs and lows in the lives of the three friends - the impulsive Ishaan (Sushant Singh Rajput), the emotional Omi (Amit Sadh) and the composed Govind (Raj Kumar Yadav). The trio start a sports goods shop and a cricket training academy. The trials and tribulations of the friends, caused by their personal equations and the socio-political situation around them, forms the basis of this engrossing tale.

We've often heard complaints about how a good book is never adapted well for the screen. Three Mistakes Of My Life was never a good book in the first place, and a movie adaptation didn't sound like a good idea.

But it seems like Abhishek Kapoor, the struggling actor-turned-director who gave us Rock On!!, has found the correct formula for turning books to movies. Instead of taking a good book, he takes a mediocre book and writes an awesome screenplay, cutting out all the boring and preposterous parts from the story.

What also works is the fact that the director never lets the proceedings get melodramatic. Events such as the earthquake and the riots would have been milked for all their worth by other directors, but for this one, they are merely happenings that the trio must overcome and move ahead.

What works most for Kai Po Che is the acting, or the lack of it. The lead actors look and perform so naturally that the audience is carried along and left with no choice but to invest in them. The humor, the fights, the apologies - the three leads convey everything with elan.

The bonding among the three is reminiscent of Dil Chahta Hai, albeit in a rustic and earthy manner. Raj Kumar Yadav puts in a nuanced performance, Sushant is endearing, and Amit Sadh is endearing. Amrita Puri, the girl with the irritating voice from Aisha, puts in a creditable performance too.

Amit Trivedi provides three beautiful numbers that are boosted by Swanand Kirkire's wonderful lyrics. The cinematography, by Anay Goswami, is top-notch, and brings the milieu alive.

Kai Po Che is a movie that deserves a dekko. With its running length of just 126 minutes, our recommendation gets even stronger.
Share. Save. Connect.
Tweet
KAI PO CHE SNAPSHOT 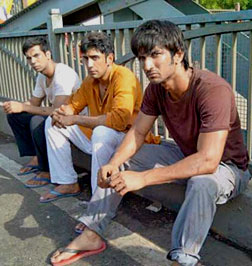 ADVERTISEMENT
This page was tagged for
Kai Po Che hindi movie
Kai Po Che reviews
release date
Sushant Singh Rajput, Amit Sadh
theatres list
Follow @fullhyderabad
Follow fullhyd.com on
About Hyderabad
The Hyderabad Community
Improve fullhyd.com
More
Our Other Local Guides
Our other sites
© Copyright 1999-2009 LRR Technologies (Hyderabad), Pvt Ltd. All rights reserved. fullhyd, fullhyderabad, Welcome To The Neighbourhood are trademarks of LRR Technologies (Hyderabad) Pvt Ltd. The textual, graphic, audio and audiovisual material in this site is protected by copyright law. You may not copy, distribute, or use this material except as necessary for your personal, non-commercial use. Any trademarks are the properties of their respective owners. More on Hyderabad, India. Jobs in Hyderabad.