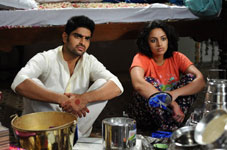 Josh / fullhyd.com
EDITOR RATING
7.0
Performances
Script
Music/Soundtrack
Visuals
8.0
7.0
6.0
7.0
Suggestions
Can watch again
Yes
Good for kids
No
Good for dates
Yes
Wait to rent it
No
When it comes to art (the drawing and painting kind), the most common form of talent you'll see is an ability to create a likeness of the subject, whether it is a person or a place or a fruit (still life art classes are practically oppressive that way). When we spot talent like that we encourage that artist and hope that kid makes something of her talent. Sometimes they do - they get much better at it. The work gets much more intricate and spectacularly beautiful, and we appreciate it more. However, often, even in these elevated cases, the art is still one of creating a likeness - it is replication.

And then there is the other kind of artist who is less common. She isn't worried so much about replication as she is concerned about expression. Simple or intricate, that art communicates. Like some of those unassuming web comics (check out Gavin Aung Than and Sarah C Andersen). Not Monet or Van Gogh, but still art in a pure form. Nandini Reddy seems to work in that domain. She's no master, but with Kalyana Vaibhogame she makes something so cute and personal, you're just pleased with being a part of it.

The story has to do with young people, as usual. Shaurya (Naga Shaurya) and Divya (Malavika) both flinch at the idea of marriage and successfully break off the match made by their parents. But after going through more distressing alternatives they decide to get married so they can get divorced soon and lead unattached independent lives. The glitch in the plan is they come to be very good friends, and breaking a friendship is far tougher than breaking a marriage.

Nandini Reddy knows she's on familiar ground. Karunakaran's Happy was practically the same thing. However, she makes it her own film with all the moulding and texturing she gives it. From a story that anyone could have made, it becomes a film that only she could make. The relationships that are etched out are very personal. The characters, despite being sourced from pucca stereotypes, are all developed enough to be taken as real people and not cardboard cutouts.

There is the chap who's rather desperate to know that the grandmother will certainly die by noon because the apparatus to electrocute the body will be unavailable after 2 pm. There's the mother (a superb Aishwarya) who finds her son in a pub, and while lecturing him on the unhealthy and expensive aspects of the food there, also takes time to immerse herself in the environment (it's her first time in a pub and she wants to experience it). There's the father (Raj Mudhiraj) who's trying to make up for all the lost time of his youth by poking his female classmates on Facebook. Interesting characters abound, and the supporting cast makes an absolute killing.

The leads, too, slip into the roles like they belong. They both have speech troubles; Malavika lip syncs badly and Shaurya's English is in the same place this reviewer's basketball is - well outside the comfort zone. But barring these niggles, it is an exciting lead pair to watch as they effortlessly concoct a chemistry that convinces you of a bond that they won't talk about.

But the actor who practically owns the film is Raasi in a very stereotypical subdued housewife role. When you see the casting you don't think much of it apart from acknowledge the yesteryear star's second innings. You'd assume it'd be a stock role and a standard execution, but Raasi and Nandini Reddy have different thoughts. They make something quietly wonderful with this once-achiever-now-housewife character.

What sets aside the role, apart from the very good acting, is an intangible quality which isn't easy to define. But it becomes apparent that it has to do with the director being a woman. We aren't saying there are no well-meaning male directors who contribute such well-emphasised female characters - we're just saying they often haven't got a clue. Sometimes it is patronising, even. The difference is like the one between Danny Boyle's India (in the over-celebrated Slumdog Millionaire) and Anurag Kashyap's India (in the under-watched Gulaal, or GoW, or Ugly).

As this reviewer was happily letting the film soak in, he was also faced with the puzzle of why the film was being rated poorly elsewhere. The audience seemed very happy with it. There are complaints on editing because the film is rather long, but doesn't it matter that the reaction shots are unprotrudingly inserted and that montages are seamlessly sewn together? Isn't that good editing? The visuals are colourful and mellow as required by the mood, and the music, if not catchy, is nothing to complain about.

Just what precipitated the poor reviews, then? We can only speculate, but finding out for yourself would be a pretty agreeable idea.
Share. Save. Connect.
Tweet
KALYANA VAIBHOGAME SNAPSHOT 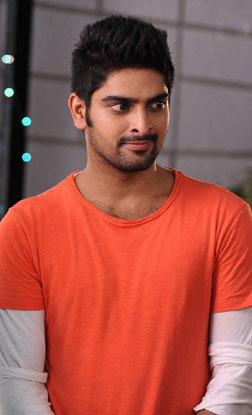 Curious, why comment on this review though?
Josh on 9th Jun 2017, 9:01am | Permalink
Wedding movie pa. Among my better reviews too.


/Shaurya (Naga Shaurya) and Divya (Malavika) both flinch at the idea of marriage and successfully break off the match made by their parents. But after going through more distressing alternatives they decide to get married so they can get divorced soon and lead unattached independent lives. The glitch in the plan is they come to be very good friends, and breaking a friendship is far tougher than breaking a marriage...//

Tell this to anyone and see if they are excited about this story, and want to watch it. Chances are they'll say we've seen it already...

It is a different thing altogether if the film has a "star" in it.
Josh on 10th Mar 2016, 8:25pm | Permalink
The thing that beats me, Sarma, is that we happen to watch highly repetitive stuff all the damn while. At least Reddy's direction is refreshing. But yeah, your observation on the star factor is very pertinent.

My own hypothesis is the unconstrained gender representation in the film. The hero is not a standard chest-hair-showing manly archetype and the heroine has spunk. A lot of men can find that unsettling but, of course, no one will talk about it.

ADVERTISEMENT
This page was tagged for
kalyana vaibhogame full movie
kalyana vaibhogame telugu full movie
Hero Nagashourya kalyana vaibhogame 2016 telugu movie part 3
Kalyana Vaibhogame telugu movie
Kalyana Vaibhogame reviews
Follow @fullhyderabad
Follow fullhyd.com on
About Hyderabad
The Hyderabad Community
Improve fullhyd.com
More
Our Other Local Guides
Our other sites
© Copyright 1999-2009 LRR Technologies (Hyderabad), Pvt Ltd. All rights reserved. fullhyd, fullhyderabad, Welcome To The Neighbourhood are trademarks of LRR Technologies (Hyderabad) Pvt Ltd. The textual, graphic, audio and audiovisual material in this site is protected by copyright law. You may not copy, distribute, or use this material except as necessary for your personal, non-commercial use. Any trademarks are the properties of their respective owners. More on Hyderabad, India. Jobs in Hyderabad.