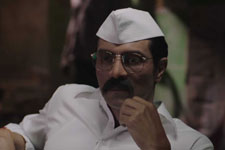 T J Reddy / fullhyd.com
EDITOR RATING
4.5
Performances
Script
Music/Soundtrack
Visuals
6.0
4.0
7.0
7.0
Suggestions
Can watch again
No
Good for kids
No
Good for dates
Yes
Wait to rent it
Yes
When you walk into Daddy, you are entering a world where Mumbai was Bombay. A world where prosthetic noses are the norm and killing about a dozen men a day with a barrage of bullets is mandatory. The liquor is cheap, the morals are loose; and the locales reek of noir styling. From this hellscape rises one man who evolves from being a hired thug to a respected member of his community.

You might think that logline resembles that of the recent Raees or the not-so-recent Nayagan (and you wouldn't be wrong). As the anti-smoking ads fade into the smoke they advocate against and the film begins, you bear witness to the other side of the coin to Once Upon A Time In Mumbai, starring Arjun Rampal as Dawood Ibrahim's biggest adversary, Arun Gawli aka Daddy.

As the film refrains from using the phrase "who's your daddy", it chronicles the life and times of one of India's most feared gangster-turned-politician-turned-convict as he rises from being the listless son of a "future endeavoured" mill worker to a reluctant gun for hire to the scourge of one cop who moonlights as director Nishikanth Kamath to joining hands with and ultimately going against a Dawood - my apologies, Maqsood - who suspiciously resembles one Milkha Singh.

We begin our journey with Inspector Vijaykar Nitin (Kamath) as he diligently collects evidence which may aid the case he is building against his arch nemesis. He curiously seems to have forgotten many instances he himself was a part of, which allows many family members and friends of Arun Gawli (Rampal) to jog his memory and narrate the story of a good boy gone bad.

Director Ashim Ahluwalia (whose previous work Miss Lovely while criminally underseen is a sight to behold) flexes his filmmaking chops in these initial exchanges. The grime-filled houses paved along the grey, smoky, neon-coloured streets Gawli and his familia inhabit set the tone for the film. With minimal dialogue-baazi tensions begin to mount, and the evolution from knives to guns happens before our eyes while we watch this ragtag bunch of local goons take charge of a section of the India's biggest metro.

As glorious as this may have been to watch, Daddy like Raees before it can't help but write itself into circles as it endeavours to make its viewers empathise and sympathise with a man who, however conflicted, is still a cold-blooded murderer and notorious gangster. The question of why this film cannot confidently ask the question "who's your daddy" is unequivocally answered here. The simple problem is the film itself is conflicted in the identity it wants the audience to perceive.

By having Dawood - damn it, Maqsood - as the miscast big bad who flees at the first sign of real trouble and a cop who is in no way a true match to Daddy's intellect and guile, the film's only hope at making the audience relate with Gawli or forgive his many sins is by emptily drumming on the fact that he is a saviour of the unwashed masses while the deafening sounds of bullets which leave behind crimson pools of blood drown out its main character's many alleged virtues. Real life accomplishments have no credence when not adequately illustrated in the biopic.

Co-writer and star Arjun Rampal who was damn near infallible in his previous outing Kahaani 2 oddly lacks the gravitas and grit required to successfully carry an over two-hour film in which he populates almost every frame. His demeanour might be as much on point as his makeup is not, but what truly lets Rampal down is his lack of grasp over a credible range of emotions which require him to display everything from anger to love to ambition to the undeniable heartbreak when a leader loses his power and stature. The scenes and plot beats are all there and his co-stars range from passable to agreeable, but the true thespians in Rampal and his buddy Farhan Akthar chose to take the day off.

Uttering the phrase "who's your daddy" for a third time only pushes me towards making a lewd comment but I'll refrain from it by saying the saving graces of this flac... plateauing cinematic offering are the exquisite sets, mood setting, colour schemes and uncompromising visuals. The truest representation of the movie's actual ambitions is indicated by these moments of immaculate detailing and domino assembling even if their tumbling doesn't lead to an unforgettable series of cinematic unfoldings.

While the movie invites the audience to take an insider's look into Gawli's dimly lit life where he seemingly does not age over three decades, it gives us obligatory reasons to care about him with mandatory dead friends and a living wife. But these in no way work toward making Gawli compelling from the get-go as he is seemingly a more reactive Robin-Hood than a proactive Che Guevara. This results in what is called the Ross Gellar excuse for smoking pot which goes something like "I was tricked into being a bad guy because I had no control of my actions". Arjun Rampal submits to the whim of his director but the director himself chooses to put the film on cruise control instead of running his work through crests and troughs.

Halfway through the plateau and as the realisation dawns upon you that the film might not rise from its comfortable pace, the gloriously incongruous, Bappi Lahari-inspired Zindagi Meri Dance Dance makes you tap your feet and nod your head in approval. As the non-skimpily-clad item girl and the item guy who raided Mithun Chakrabarthy's Disco Dancer wardrobe speak of moving to other planets to show them the power of disco, it hits you that this is a film devoid of mega egos or inane commercialization superstar gangster films are subject to. While those bloated messes have issues of their own that make them reasonably unenjoyable, a personal, tight-knit effort like Daddy needs to stand on a foundation of bravura filmmaking in exchange of posturing and chest-thumping. And it is in this regard that Daddy war bucks can't save his pet project.
Share. Save. Connect.
Tweet
DADDY (HINDI) SNAPSHOT 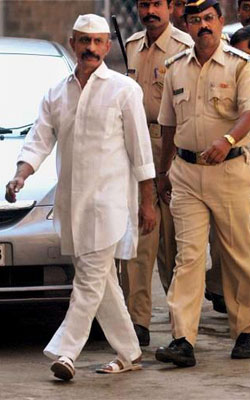 ADVERTISEMENT
This page was tagged for
daddy review hindi
daddy full movie in hindi
Daddy (Hindi) hindi movie
Daddy (Hindi) reviews
release date
Follow @fullhyderabad
Follow fullhyd.com on
About Hyderabad
The Hyderabad Community
Improve fullhyd.com
More
Our Other Local Guides
Our other sites
© Copyright 1999-2009 LRR Technologies (Hyderabad), Pvt Ltd. All rights reserved. fullhyd, fullhyderabad, Welcome To The Neighbourhood are trademarks of LRR Technologies (Hyderabad) Pvt Ltd. The textual, graphic, audio and audiovisual material in this site is protected by copyright law. You may not copy, distribute, or use this material except as necessary for your personal, non-commercial use. Any trademarks are the properties of their respective owners. More on Hyderabad, India. Jobs in Hyderabad.