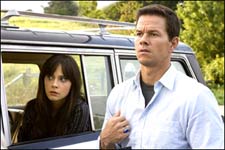 Samrat Sharma / fullhyd.com
EDITOR RATING
4.5
Performances
Script
Music/Soundtrack
Visuals
6.0
6.5
4.0
7.0
Suggestions
Can watch again
No
Good for kids
No
Good for dates
No
Wait to rent it
Yes
If you don't pay heed to the increasingly negative buzz that The Happening is drawing, and the fact that Shyamalan seems to have lost it since his early successes, you will find a gloriously made B-movie waiting for you at the theaters this week. It's got a suitably mad B-movie horror plot, a cast that is not afraid to ham, and a director who opens the film with the glee of a 4th class boy.

That is, until the first 10 minutes are up. When the actual plot starts to unravel, you realize that you have walked into the worst kind of Shyamalan movie ever - one in which he doesn't care. Say what you will about Lady In The Water or The Village, at least we had a director confident of his craft trying to pull off a sombre take on what were silly fairy tales with plot twists that cheated.

This time around, gone is his signature arrogance in framing shots and the crafty way he pulled wool over your eyes. This is a movie where the director is not interested in doing much of anything at all. That, my friend, is the worst kind of film you can walk into any time of the year. Even with all the implied violence in the film, nothing ever comes across as coherent or well put together.

When people in New York begin killing themselves for no reason, everyone suspects a new kind of psychological or biological terrorist attack. Professor Elliot Moore (Mark Wahlberg) and estranged wife Alma (Zooey Deschanel) travel to the countryside with the daughter of a fellow professor (John Leguizamo). The professor surmises that this is a botanical attack. Like I said, as B-movie horror films go, this is not a bad plot.

But all we get after these scenes of implied violence people inflict upon themselves, is a whole lot of nothing. There are scenes of wind flowing through trees that is meant to be scary, but with the pithy director now tamed by the studios into a, *gasp*, directionless director, all we get are a few unintended laughs as we see Wahlberg race the wind.

Not only is the script full of small moments of sheer stupidity and mind-boggling bizarreness, the grand overarching plot contained within is completely mangled by the director as he proceeds to butcher your two hours. Large chunks of the film are limp and barely cogent. Tension, or what passes for it, is rarely employed effectively, and the narrative is so fractured and jerky that there are multiple sessions of watch-gazing happening in the theatre.

I could give you examples of the sheer foolishness on the screen, but then I wouldn't want to spoil even a terrible film for you. What I can tell you is this: when you think that this doesn't make sense, it won't. Not even when the film concludes.

The absolute wastefulness of the direction even makes the actors labor hard. Wahlberg and Deschanel barely manage to look credible, while Leguizamo offers up quite a bit of onscreen energy, even though he looks totally wasted in a few scenes.

I'd warn you strongly against watching this one, but then again, Shyamalan fans wouldn't believe me, and those who even do, shouldn't miss out on watching what will be a landmark film. Forget Lady In The Water, The Happening will forever be remembered as the film that tanked Shyamalan's direction completely.
Share. Save. Connect.
Tweet
THE HAPPENING SNAPSHOT

See The Happening full details
THE HAPPENING USER REVIEWS
1 - 3 OF 3 COMMENTS
POSITIVE  |  NEGATIVE |  NEWEST  |  OLDEST  |  MOST HELPFUL  |  LEAST HELPFUL
USER RATING
5.0
1 USER
Performances
Script
Music/Soundtrack
Visuals
5.0
5.0
3.0
5.0
Can watch again - No
Good for kids - Yes
Good for dates - Yes
Wait to rent it - Yes
Krishna on 2nd Jul 2008, 9:24am | Permalink
Better than Lady In The Water but Shyamalan's definitely losing it. Though the film arouses a lot of curiosity as it begins, loses steam soon.

Dissing a movie for the sake of it does not a funny review make.

ADVERTISEMENT
This page was tagged for
The Happening english movie
The Happening reviews
release date
Mark Wahlberg, Zooey Deschanel
theatres list
Follow @fullhyderabad
Follow fullhyd.com on
About Hyderabad
The Hyderabad Community
Improve fullhyd.com
More
Our Other Local Guides
Our other sites
© Copyright 1999-2009 LRR Technologies (Hyderabad), Pvt Ltd. All rights reserved. fullhyd, fullhyderabad, Welcome To The Neighbourhood are trademarks of LRR Technologies (Hyderabad) Pvt Ltd. The textual, graphic, audio and audiovisual material in this site is protected by copyright law. You may not copy, distribute, or use this material except as necessary for your personal, non-commercial use. Any trademarks are the properties of their respective owners. More on Hyderabad, India. Jobs in Hyderabad.